Home Business 1 in 5 consider quitting work for good due to childcare costs!
Our website publishes news, press releases, opinion and advertorials on various financial organizations, products and services which are commissioned from various Companies, Organizations, PR agencies, Bloggers etc. These commissioned articles are commercial in nature. This is not to be considered as financial advice and should be considered only for information purposes. It does not reflect the views or opinion of our website and is not to be considered an endorsement or a recommendation. We cannot guarantee the accuracy or applicability of any information provided with respect to your individual or personal circumstances. Please seek Professional advice from a qualified professional before making any financial decisions. We link to various third-party websites, affiliate sales networks, and to our advertising partners websites. When you view or click on certain links available on our articles, our partners may compensate us for displaying the content to you or make a purchase or fill a form. This will not incur any additional charges to you. To make things simpler for you to identity or distinguish advertised or sponsored articles or links, you may consider all articles or links hosted on our site as a commercial article placement. We will not be responsible for any loss you may suffer as a result of any omission or inaccuracy on the website.
Business

1 in 5 consider quitting work for good due to childcare costs! 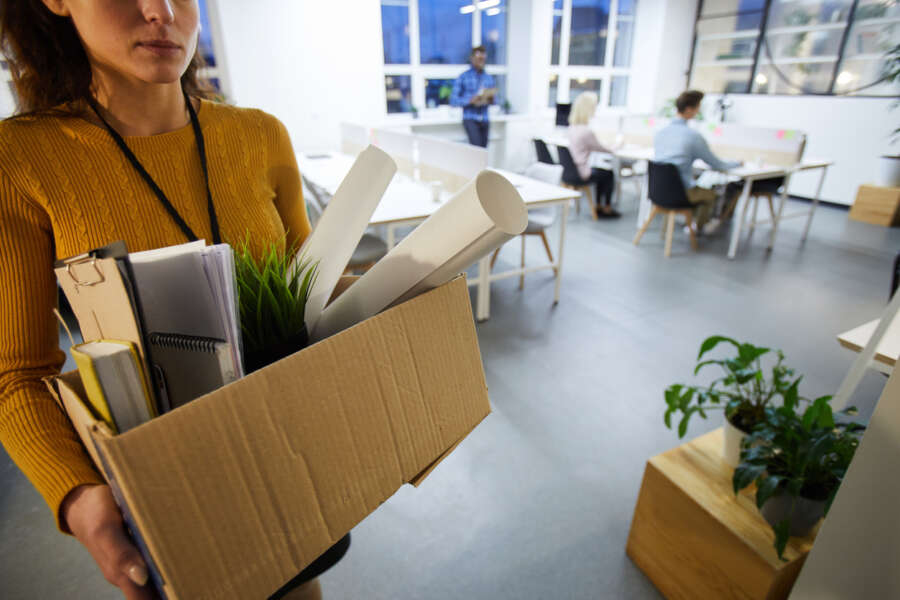 The ever-rising cost of living and childcare is making many people have to make the difficult decision on whether to continue working, or give up their career. A study has shown that a staggering 1 in 5 people are now considering quitting their jobs due to this.

The study by Easy Offices, surveyed 2000 people across the country, asking how they felt about topics surrounding parental leave, childcare costs and the financial burdens surrounding time away from work. It was found that a striking 17% of people surveyed agreed that childcare costs have caused them to consider leaving work.

Interestingly, attitudes varied considerably depending on the type of job people have. The industries where people were most likely to leave their work to save on childcare were: Sales, media and marketing (35.2%), retail, catering and leisure (35.2%), and Finance (34.7%)

The breakdown from the study, of the impact of expensive childcare by city is shown below: 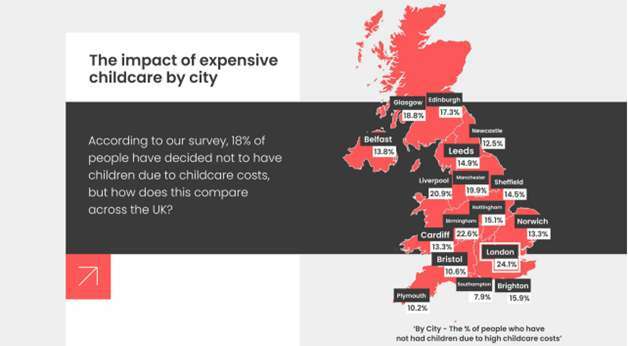 The impact of expensive childcare breakdown by industry from the study is shown below: 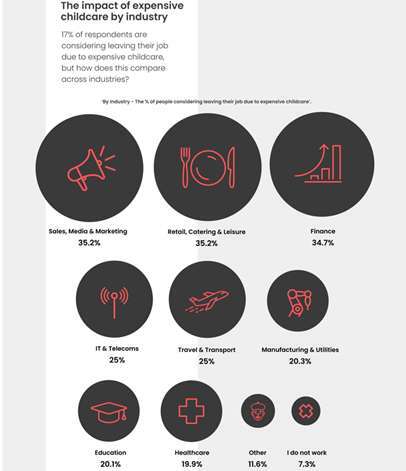 How companies can support parents with the cost of childcare

Around 23% of employees agree that better paid parental leave would be an encouragement in starting a family. Businesses can help by:

You can read the full study here.