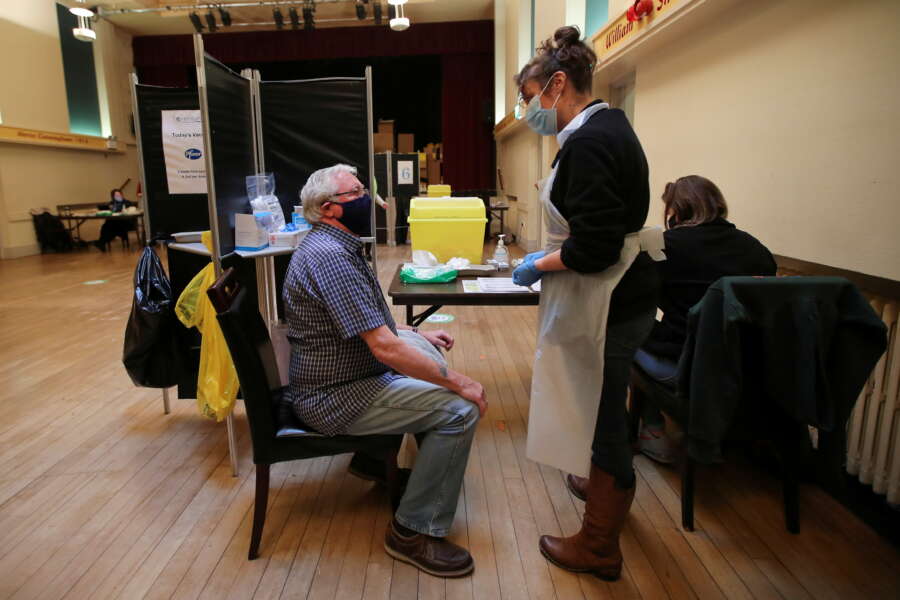 LONDON (Reuters) -A longer gap between doses of Pfizer’s COVID-19 vaccine leads to higher overall antibody levels than a shorter gap, a British study found on Friday, but antibody levels are not sustained for long after the first dose.

The study might help inform vaccination strategies against the Delta variant, which reduces the effectiveness of a first dose of the vaccine even though two doses are still protective, and one author said that Britain’s eight-week gap was a “sweet spot” against Delta.

The authors emphasised that either dosing schedule produced a strong antibody and T-cell response in the study of 503 healthcare workers.

“For the longer dosing interval … neutralising antibody levels against the Delta variant were poorly induced after a single dose, and not maintained during the interval before the second dose,” the authors of the study, which is being led by the University of Oxford, said.

Neutralising antibodies are thought to play an important role in immunity against the coronavirus, but are not the whole picture, with T-cells also playing a part.

The study found overall T-cell levels were 1.6 times lower with a long gap compared with the short dosing interval of 3-4 weeks, but that a higher proportion were “helper” T-cells, which support long-term immune memory, with the long gap.

“While we tend to emphasise neutralising antibodies as a measure of the immune response … cellular immunity, which is harder to measure, is also likely to be very important,” said Peter English, former chair of the BMA Public Health Medicine Committee.

The findings, issued as a pre-print, support the view that, while a second dose is needed to provide full protection against Delta, delaying that dose might provide more durable immunity, even if it is at the cost of protection in the short-term.

Last December, Britain extended the interval between vaccine doses to 12 weeks, although Pfizer warned there was no evidence to support a move away from a three-week gap.

“I think the eight-week (interval) is about the sweet spot,” Susanna Dunachie, joint chief investigator on the study, told reporters.

January 7, 2022
Editorial & Advertiser disclosureEditorial & Advertiser disclosureOur website provides you with information, news, press releases, Opinion and advertorials on various financial products and services. This is not to be considered as financial advice and should be considered only for information purposes. We cannot guarantee the accuracy or applicability of any information provided with respect to your individual or personal circumstances. Please seek Professional advice from a qualified professional before making any financial decisions. We link to various third party websites, affiliate sales networks, and may link to our advertising partners websites. Though we are tied up with various advertising and affiliate networks, this does not affect our analysis or opinion. When you view or click on certain links available on our articles, our partners may compensate us for displaying the content to you, or make a purchase or fill a form. This will not incur any additional charges to you. To make things simpler for you to identity or distinguish sponsored articles or links, you may consider all articles or links hosted on our site as a partner endorsed link.