Our website publishes news, press releases, opinion and advertorials on various financial organizations, products and services which are commissioned from various Companies, Organizations, PR agencies, Bloggers etc. These commissioned articles are commercial in nature. This is not to be considered as financial advice and should be considered only for information purposes. It does not reflect the views or opinion of our website and is not to be considered an endorsement or a recommendation. We cannot guarantee the accuracy or applicability of any information provided with respect to your individual or personal circumstances. Please seek Professional advice from a qualified professional before making any financial decisions. We link to various third-party websites, affiliate sales networks, and to our advertising partners websites. When you view or click on certain links available on our articles, our partners may compensate us for displaying the content to you or make a purchase or fill a form. This will not incur any additional charges to you. To make things simpler for you to identity or distinguish advertised or sponsored articles or links, you may consider all articles or links hosted on our site as a commercial article placement. We will not be responsible for any loss you may suffer as a result of any omission or inaccuracy on the website.
Home Headlines Asia shares weigh China risks, yen hits 6-month high 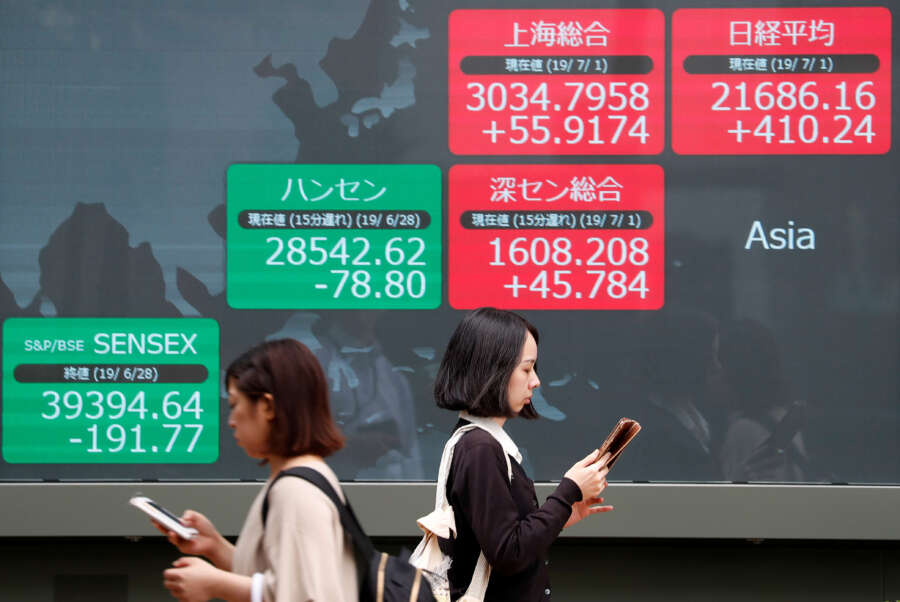 SYDNEY (Reuters) – Asian shares recovered from early losses on Tuesday as investors weighed the near-term costs of the coronavirus infections in China against the longer-term benefits of a complete reopening of the world’s second-largest economy.

MSCI’s broadest index of Asia-Pacific shares outside Japan edged up 0.5%, having been down more than 1.0% in choppy early trading.

Liquidity was lacking as Japanese markets were shut for a holiday, making for some choppy moves. Nikkei futures were trading at 25,750 compared with the last close for the cash index of 26,094.

Investors were encouraged by a 1.3% bounce in the Hang Seng, which had been off more than 2% at one stage, while Chinese blue chips inched up 0.2%.

A batch of surveys had showed China’s factory activity shrank at the sharpest pace in nearly three years as COVID-19 infections swept through production lines.

“China is entering the most dangerous weeks of the pandemic,” warned analysts at Capital Economics.

“The authorities are making almost no efforts now to slow the spread of infections and, with the migration ahead of Lunar New Year getting started, any parts of the country not currently in a major COVID wave will be soon.”

Mobility data suggested that economic activity was depressed nationwide and would likely remain so until the infection wave began to subside, they added.

Data on U.S. payrolls this week are expected to show the labour market remains tight, while EU consumer prices could show some slowdown in inflation as energy prices ease.

“Energy base effects will bring about a sizeable reduction in inflation in the major economies in 2023 but stickiness in core components, much of this stemming from tight labour markets, will prevent an early dovish policy ‘pivot’ by central banks,” analysts at NatWest Markets wrote in a note.

Minutes of the Federal Reserve’s December meeting due this week will likely show many members saw risks that interest rates would need to go higher for longer, but investors will be attuned to any talk of pausing, given how far rates have already risen.

While markets have for a while priced in an eventual U.S. easing, they were badly wrong-footed by the Bank of Japan’s shock upward shift in its ceiling for bond yields.

The BOJ is now considering raising its inflation forecasts in January to show price growth close to its 2% target in fiscal 2023 and 2024, according to the Nikkei.

Such a move at its next policy meeting on Jan. 17-18 would only add to speculation of an end to ultra-loose policy, which has essentially acted as a floor for bond yields globally.

Japanese 10-year yields have steadied just short of the new 0.5% ceiling, but only because the BOJ stepped in last week with unlimited buying operations.

The policy shift boosted the yen across the board, with the dollar losing 5% in December and the euro 2.3%.