Home Headlines Biden says he would be willing to use force to defend Taiwan against China
Our website publishes news, press releases, opinion and advertorials on various financial organizations, products and services which are commissioned from various Companies, Organizations, PR agencies, Bloggers etc. These commissioned articles are commercial in nature. This is not to be considered as financial advice and should be considered only for information purposes. It does not reflect the views or opinion of our website and is not to be considered an endorsement or a recommendation. We cannot guarantee the accuracy or applicability of any information provided with respect to your individual or personal circumstances. Please seek Professional advice from a qualified professional before making any financial decisions. We link to various third-party websites, affiliate sales networks, and to our advertising partners websites. When you view or click on certain links available on our articles, our partners may compensate us for displaying the content to you or make a purchase or fill a form. This will not incur any additional charges to you. To make things simpler for you to identity or distinguish advertised or sponsored articles or links, you may consider all articles or links hosted on our site as a commercial article placement. We will not be responsible for any loss you may suffer as a result of any omission or inaccuracy on the website.
Headlines 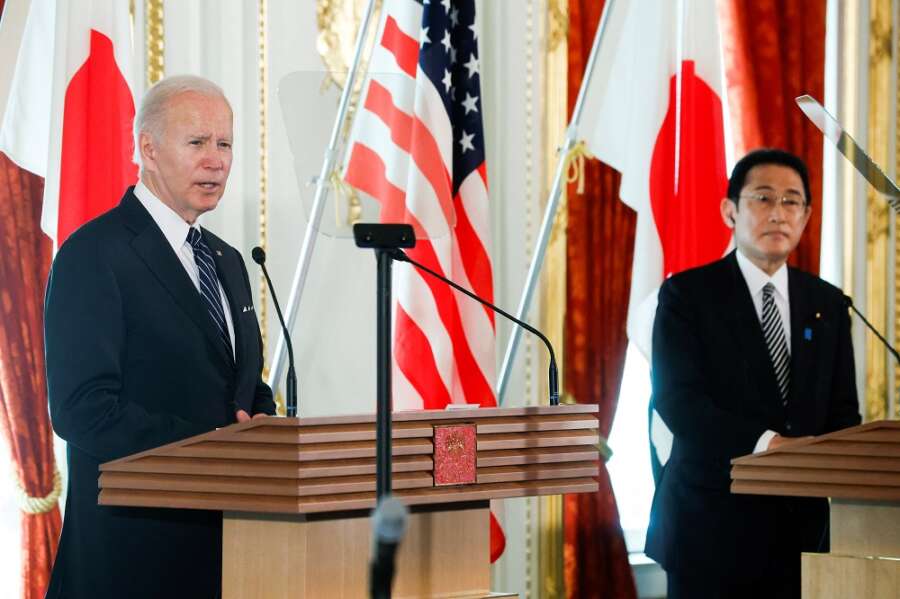 By Trevor Hunnicutt and Sakura Murakami

TOKYO (Reuters) -U.S. President Joe Biden said on Monday he would be willing to use force to defend Taiwan against Chinese aggression in a comment that seemed to stretch the limits of the ambiguous U.S. policy towards the self-ruled island.

While Washington is required by law to provide Taiwan with the means to defend itself, it has long followed a policy of “strategic ambiguity” on whether it would intervene militarily to protect Taiwan in the event of a Chinese attack.

After Biden made the remark at a joint news conference with Japanese Prime Minister Fumio Kishida in Tokyo, an aide said the president’s statement represented no change in the long-standing American stance to the island that China claims as its own.

A reporter asked Biden if the United States would defend Taiwan if it were attacked. “Yes,” the president answered.

“That’s the commitment we made,” said Biden, who helped build an international coalition trying to thwart Russia’s invasion of Ukraine.

Biden added it was his expectation that such an event would not happen or be attempted.

But the comment was likely to be closely watched in a region worried about China’s rising influence. China has been a key topic for Biden on his inaugural trip to Asia.

A White House official later said there was no change in policy towards Taiwan.

China considers the democratic island its territory, under its “one China” principle, and says it is the most sensitive and important issue in its relationship with Washington.

China has no room for compromise or concessions on matters relating to its sovereignty and territorial integrity, foreign ministry spokesperson Wang Wenbin told a regular news briefing.

Biden’s national security aides shifted in their seats and appeared to be studying Biden closely as he responded to the question on Taiwan. Several looked down.

Biden made a similar comment in October, saying “Yes, we have a commitment to do that” when asked if the United States would come to the defence of Taiwan. At that time, a White House spokesperson said Biden was not announcing any change in U.S. policy and one analyst referred to the comment as a “gaffe”.

Despite the White House insistence that Monday’s comments did not represent a change of policy, Grant Newsham, a retired U.S. Marine Corps colonel and now a research fellow at the Japan Forum for Strategic Studies, said the meaning was clear.

“This statement deserves to be taken seriously,” Newsham said. “It is a clear enough statement that the U.S. will not sit by if China attacks Taiwan.”

Biden made other tough comments about Beijing’s increasingly assertive posture in the region, saying he hoped Russian President Vladimir Putin would pay a price for his invasion of Ukraine in part to show China what it would face if it were to invade Taiwan.

Biden’s remarks are also likely to overshadow the centrepiece of his Japan visit, the launch of an Indo-Pacific Economic Framework, a broad plan providing an economic pillar for U.S. engagement with Asia.

During his time in Tokyo, Biden is also scheduled to meet the leaders of India and Australia – the other members of the Quad, an informal security grouping formed to counter China’s growing influence in the Indo-Pacific region.

Kishida said he told Biden that Japan would consider various options to boost its defence capabilities, including the ability to retaliate. That would include a “considerable increase” in its defence budget, Kishida said.

Japan’s role in any conflict over Taiwan would be to enable a U.S. operation and help the United States defend its assets, said Yoji Koda, a retired Maritime Self Defense Force admiral and former fleet commander.

“Japan’s role in that would be substantial. Japan is an enabler of that security deterrence,” he said.

Kishida said that he had gained support from Biden on Japan becoming a permanent member of the U.N. Security Council amid growing calls for reform of the council. China and Russia are permanent members.

UPDATE 1-Biden’s Asian economic talks include 13 countries, and no ChinaChina’s foreign ministry hits back at Biden comments on U.S. aiding Taiwan militarilyTaiwan foreign ministry thanks Biden for reaffirming safety commitment TIMELINE-Comments by Biden and others on U.S. policy of ‘ambiguity’ on Taiwan

Explainer-Ukraine looks for ways to get its grain out