Home Headlines Biden unveils $800 million in new Ukraine military aid, to ask Congress for more
Our website publishes news, press releases, opinion and advertorials on various financial organizations, products and services which are commissioned from various Companies, Organizations, PR agencies, Bloggers etc. These commissioned articles are commercial in nature. This is not to be considered as financial advice and should be considered only for information purposes. It does not reflect the views or opinion of our website and is not to be considered an endorsement or a recommendation. We cannot guarantee the accuracy or applicability of any information provided with respect to your individual or personal circumstances. Please seek Professional advice from a qualified professional before making any financial decisions. We link to various third-party websites, affiliate sales networks, and to our advertising partners websites. When you view or click on certain links available on our articles, our partners may compensate us for displaying the content to you or make a purchase or fill a form. This will not incur any additional charges to you. To make things simpler for you to identity or distinguish advertised or sponsored articles or links, you may consider all articles or links hosted on our site as a commercial article placement. We will not be responsible for any loss you may suffer as a result of any omission or inaccuracy on the website.
Headlines 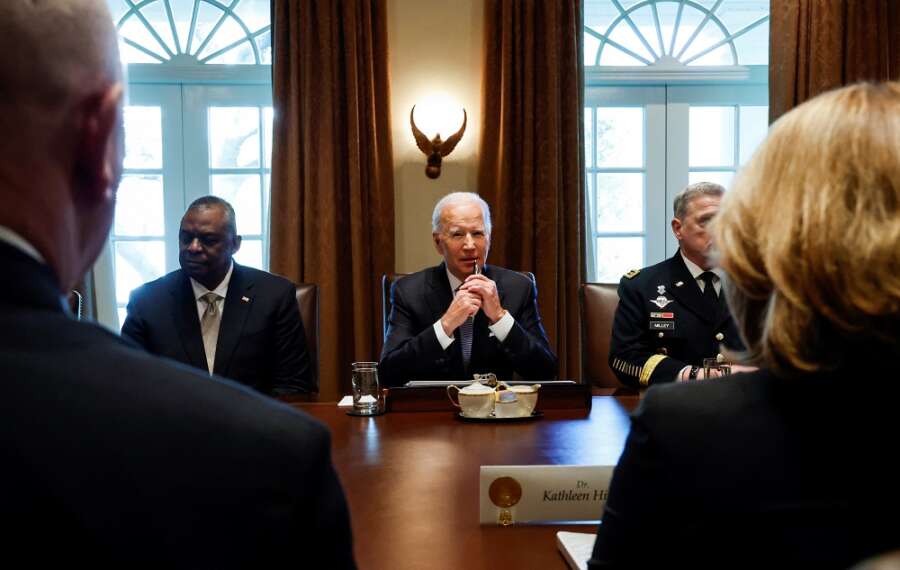 WASHINGTON (Reuters) – U.S. President Joe Biden pledged $800 million in more weaponry for Ukraine on Thursday and said he would ask Congress for more money to help bolster support for the Ukrainian military as it faces a fresh onslaught by Russia on its eastern flank.

Addressing Americans from the White House’s Roosevelt Room, Biden pledged to send heavy artillery, dozens of howitzers, and 144,000 rounds of ammunition, as well as tactical drones, as he called on Congress for supplemental funding to provide additional aid for Kyiv.

Biden also announced $500 million in direct economic assistance to the Ukrainian government as it battles to save the lives of people under siege by Russian forces.

“We’re in a critical window now of time where they’re going to set the stage for the next phase of this war,â€ Biden said, referring to Russia’s tactical shift to the east. The United States and allies are “moving as fast as possible” to provide Ukraine with the equipment and weapons it needs.

Biden said the new assistance will expend most of the remaining funds available for this purpose and that he will make a supplemental funding request to Congress next week. He said the amount is being discussed.

“That’s being decided now. I’m asking the Defense Department to put together a proposal,” he said.

The U.S. House of Representatives will consider the additional aid for Ukraine as soon as next week, Speaker Nancy Pelosi told reporters. There is strong support among Democrats and Republicans for assisting Ukraine.

The Pentagon said that the new package would include 75 155mm long-range howitzers, 72 tactical vehicles to tow them, and more than 100 Phoenix Ghost drones.

Biden spoke after face-to-face talks with Ukrainian Prime Minister Denys Shmyhal, who is in Washington for a variety of meetings.

The president announced plans to ban Russian-affiliated ships from docking at U.S. ports, as previously reported by Reuters, further ratcheting up pressure on Moscow. A senior administration official said the move was aimed at further isolating Russia.

Biden also said his administration will allow Ukrainians fleeing Russia’s invasion of their home country to come to the United States temporarily if they have American sponsors, a move that could affect thousands of refugees.

Biden said the new weapons are needed as Ukraine battles a major offensive from Russia in the east, where the flatter terrain requires a different set of weaponry.

On Wednesday, he convened U.S. military leaders in an annual White House gathering that took on special significance as the war enters a risky new phase.

Russia has said it has entered a new stage of its operation and is methodically seeking to “liberate” the Donbas region of eastern Ukraine. Western allies anticipate Russia’s campaign could last many months, grind to a stalemate and test the battlefield capabilities of Ukrainian fighters.

Biden disputed Russian claims of control of the embattled city of Mariupol, saying that “there’s no evidence that Mariupol has completely fallen.” He added that Russia “should allow humanitarian corridors to let people at that steel mill and other places (that) are buried under rubble to get out.”

Russia says it launched what it calls a “special military operation” on Feb. 24 to demilitarize and “denazify” Ukraine. Kyiv and its Western allies reject that as a false pretext.

U.S. forces are not fighting in Ukraine but are indirectly engaged, arming, training and financing its forces.