Home Headlines Companies in China distance themselves from Taiwan amid Pelosi backlash
Our website publishes news, press releases, opinion and advertorials on various financial organizations, products and services which are commissioned from various Companies, Organizations, PR agencies, Bloggers etc. These commissioned articles are commercial in nature. This is not to be considered as financial advice and should be considered only for information purposes. It does not reflect the views or opinion of our website and is not to be considered an endorsement or a recommendation. We cannot guarantee the accuracy or applicability of any information provided with respect to your individual or personal circumstances. Please seek Professional advice from a qualified professional before making any financial decisions. We link to various third-party websites, affiliate sales networks, and to our advertising partners websites. When you view or click on certain links available on our articles, our partners may compensate us for displaying the content to you or make a purchase or fill a form. This will not incur any additional charges to you. To make things simpler for you to identity or distinguish advertised or sponsored articles or links, you may consider all articles or links hosted on our site as a commercial article placement. We will not be responsible for any loss you may suffer as a result of any omission or inaccuracy on the website.
Headlines

Companies in China distance themselves from Taiwan amid Pelosi backlash 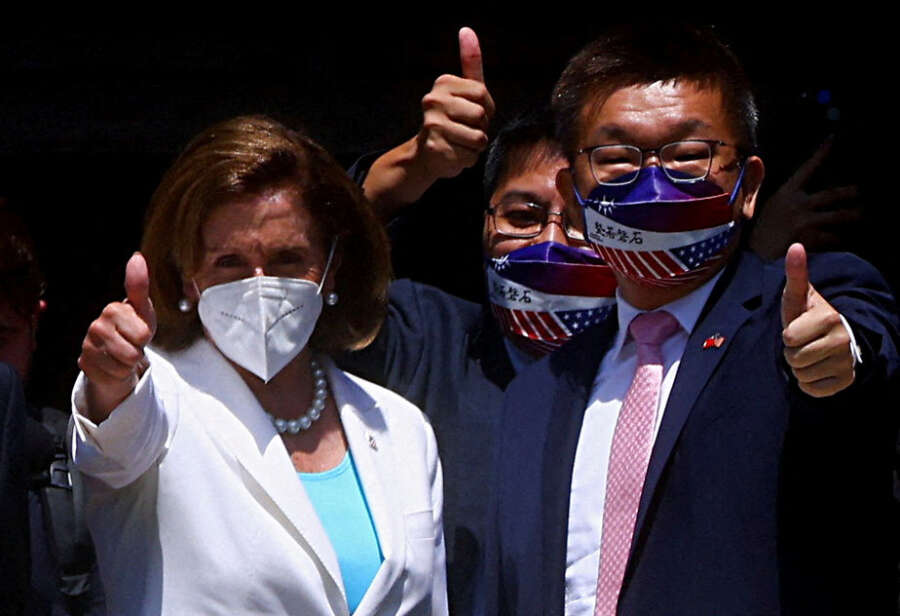 BEIJING (Reuters) – From a Chinese soy sauce maker to an Asia-focused asset manager, companies in China are rushing to distance themselves from geopolitical tensions over Taiwan following last week’s visit to the island by a high-profile U.S. official.

China claims self-ruled Taiwan as its territory, and the visit by U.S. House of Representatives Speaker Nancy Pelosi to Taipei last week – in defiance of Beijing’s warnings – has sparked a wave of Chinese nationalism and huge military drills.

Chinese social media users have targeted companies and celebrities they see as unpatriotic or supportive of Taiwan’s independence with strong criticism – such as candy brand Snickers, whose owner apologised last week for a product launch that was seen as suggesting Taiwan is a country.

“The inappropriate content published seriously goes against Haitian’s culture, does not match with Haitian’s values, and has hurt the feelings of the Chinese people, producing a negative societal influence,” the company said on its Weibo account, promising it would manage its employees better.

Another business, Asia-focused asset manager Matthews International Capital Management, issued a clarification on Monday after it was described by Beijing-backed Hong Kong newspaper Ta Kung Pao as being founded by Pelosi’s husband, saying such allegations were “factually incorrect”.

It said on its website that it was founded by Paul Matthews, not Paul Pelosi, and also did not have any current ownership or business ties with William Hambrecht, who is a friend and political supporter of Pelosi, contrary to media reports.

“We take the recent misreporting and false statements about our firm very seriously and are working with media outlets to take prompt corrective action,” Matthews, whose main owners include Paul Matthews, Mark Headley, Mizuho Financial Group Inc and Royal Bank of Canada, said on Monday.

In a separate case, Taiwanese chip maker United Microelectronics Corp (UMC), distanced itself from its founder Robert Tsao, who last week pledged to donate NT$3 billion (US$100 million) to help Taiwan bolster its defences, after his comments were pilloried by Chinese social media users.

In a statement, UMC said: “Mr Tsao retired from UMC more than 10 years ago. He has nothing to do with UMC.”

Chinese state media have issued warnings, saying that companies should consider their access to the world’s second largest economy with respect to the Taiwan situation and Pelosi, who has, along with her immediate family, been sanctioned by China after her visit.

“It can be expected that if any ties of interest with China can be found in the business activities of Pelosi and her immediate family members, they will definitely be cut off,” state-backed Global Times newspaper said in an editorial over the weekend.

China’s military announced fresh military drills on Monday in the seas and airspace around Taiwan – a day after the scheduled end of its largest ever exercises, confirming the fears of some security analysts and diplomats that Beijing would continue to maintain pressure on Taiwan’s defences.

XSOLLA EXPANDS IN THE UK WITH KEY HIRE