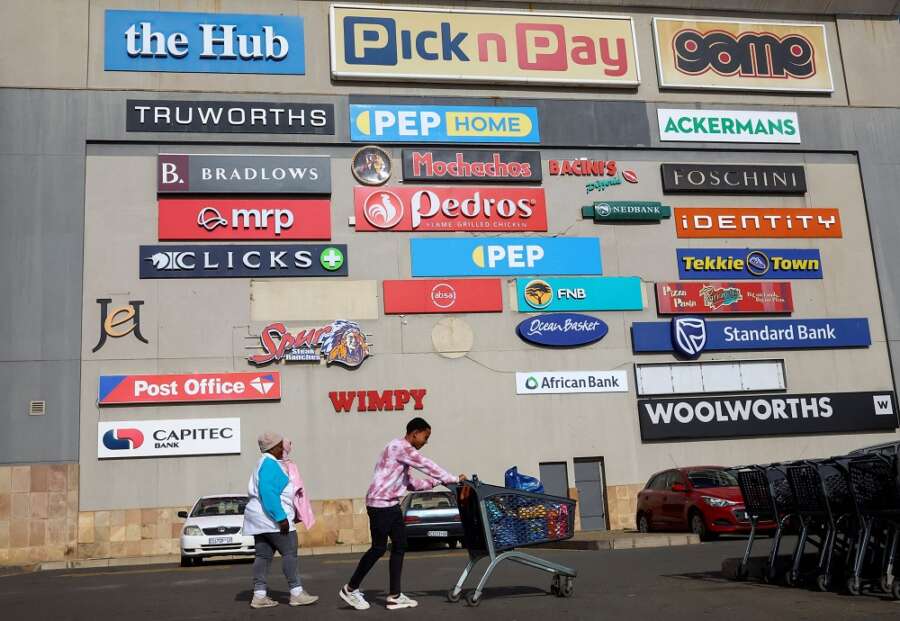 JOHANNESBURG (Reuters) – With two days to go until opening to the public, workers rush to put the finishing touches on the Kwena Square shopping complex, a shiny $13 million sign that South Africans are defying the global “retail apocalypse”.

Not even COVID-19 could separate them from their beloved malls.

“I love going to the mall with my daughter and my grandkids,” said 54-year-old Kowie Erasmus, who’s eagerly awaiting Friday’s grand opening of Johannesburg’s Kwena Square, which broke ground at the height of the pandemic.

“Malls are a social place.”

The South African market has evolved differently from many other places in the world; high crime rates and a scarcity of safe public spaces have long driven both retailers and shoppers into commercial complexes. Armed guards and parking with restricted access ensured carefree consumer consumption.

The attachment to malls has confounded the expectations of many industry players and experts who saw lockdowns in South Africa – initially among the world’s strictest – as an opportunity for e-commerce to finally take hold and take significant bites into traditional sales.

Some leading players are now actually doubling down on brick-and-mortar expansion plans in Africa’s most developed economy, a 1 trillion rand ($62 billion) retail market.

“Investments in physical stores will still be significantly greater than investment in online,” said David North, chief transformation officer at grocery and clothing group Pick n Pay, one of several retailers that said they would invest more in physical operations than online in this financial year.

More than 300,000 square metres of new leasable retail space are set to be completed across the country this year, compared with about 367,000 square metres over the previous two years combined, according to data from property consultants Rode & Associates.

The new spaces include a string of malls that are due to open in 2022, including Oceans Mall in the coastal city of Durban, kwaBhaca Mall in the Eastern Cape and Mamelodi Square in Pretoria

“The experience economy – being in a physical space and enjoying that space – is what South Africans crave and value the most,” said Ulana van Biljon of Emira Property Fund, a real estate investment trust.

In seven leading economies accounting for roughly half of the world’s economic output, online retail sales increased from $2 trillion in 2019 to around $2.9 trillion last year, according to U.N. trade agency UNCTAD.

Traditional retail players in those markets have taken a pounding with over 17,500 chain store outlets vanishing across Britain alone in the first year of the pandemic. In the United States, the number of malls – already in a years-long decline – could drop to around 600 from just over 1,000 in 2020.

While e-commerce’s share of South Africa’s total retail sales more than tripled to around 5% from 2019 to 2021, according to Euromonitor International, it lags far behind many nations. South Africa has almost half as many people as Mexico, for instance, yet its $2.9 billion e-commerce market is a sliver of Mexico’s $19 billion.

E-commerce accounts for 28% of retail sales in Britain, 25% in China and 14% in the United States, according to UNCTAD estimates.

Furthermore, home deliveries are complicated by the fact some consumers lack recognizable street addresses, such as in townships which can lack proper signage.

‘NOT JUST ABOUT SHOPPING’

The resilience of South African malls isn’t simply down to e-commerce’s difficult path, though. The security they offer is still a big attraction at a time when the country’s historically high crime rates show little sign of abating.

National police reported a 15% increase in so-called contact crimes – including assault, murder, robbery and sexual offences – in the quarter ended March 2022, when they rose to their highest level in the past five years over that period. Carjackings rose 19.7%.

Gomotsegang Motswatswe, a public relations account manager, said she spent a lot of time with her family at the mall.

“It’s important for malls to provide security and a safe place,” said the 35-year-old, adding that it gave her peace of mind to know her car was parked in a secure place.

“It’s not just about shopping,” she explained. “We still want to be out there as people and socialise.”

Motswatswe is among the many South Africans who are returning in force to malls following the easing of COVID-19 restrictions. Foot traffic has not yet recovered – still 18% below pre-pandemic levels at the end of the most recent quarter – yet shoppers are spending more per visit, according to data compiled by MSCI Research.

Business at South Africa’s shopping centres is now beating pre-pandemic levels on average, in terms of trading density, which measures turnover per square metre, according to the data.

THREE HOURS TO THE MALL

Retail executives are betting on both traditional and online operations.

Pick n Pay is opening 200 discount Boxer stores and revamping Pick n Pay stores, though it is also targeting an eight-fold increase in online sales. The bulk of its 3.5 billion rand capital investment in the current financial year is earmarked for new stores and revamps.

Value fashion and homeware retailer Mr Price says 66.5% of its capital expenditure for the current financial year will be allocated to stores, with a plan to open 180-200.

Massmart, which is majority-owned by Walmart, says 57% of its capex will go towards new stores and remodels this year, while 15% is allocated for e-commerce expansion. Over the next five years, it wants to expand its e-commerce business to 15% of total sales, from 2.2% now.

Upmarket fashion and homeware retailer TFG is spending 75% of its capex on new stores and e-commerce.

There may be room to grow, in terms of brick-and-mortar stores, by meeting the needs of South Africans living in rural and downmarket communities who have long been underserved by retail parks and complexes.

South Africans like Phindile Nkosi, who lives in Pongola, a small town in rural eastern South Africa and drives three hours with her children to spend the day at a mall on the coast, demonstrate there’s still unmet demand.

“I do wish that Pongola would have a mall. Because, as much as it’s a small town, it’s developing.”

Companies in China distance themselves from Taiwan amid...

Analysis-East Europe’s party is over as double-digit inflation...

August 2, 2022
Editorial & Advertiser disclosureEditorial & Advertiser disclosureOur website provides you with information, news, press releases, Opinion and advertorials on various financial products and services. This is not to be considered as financial advice and should be considered only for information purposes. We cannot guarantee the accuracy or applicability of any information provided with respect to your individual or personal circumstances. Please seek Professional advice from a qualified professional before making any financial decisions. We link to various third party websites, affiliate sales networks, and may link to our advertising partners websites. Though we are tied up with various advertising and affiliate networks, this does not affect our analysis or opinion. When you view or click on certain links available on our articles, our partners may compensate us for displaying the content to you, or make a purchase or fill a form. This will not incur any additional charges to you. To make things simpler for you to identity or distinguish sponsored articles or links, you may consider all articles or links hosted on our site as a partner endorsed link.