Home Headlines Damien Hirst burns artworks after collectors pick their NFTs instead
Our website publishes news, press releases, opinion and advertorials on various financial organizations, products and services which are commissioned from various Companies, Organizations, PR agencies, Bloggers etc. These commissioned articles are commercial in nature. This is not to be considered as financial advice and should be considered only for information purposes. It does not reflect the views or opinion of our website and is not to be considered an endorsement or a recommendation. We cannot guarantee the accuracy or applicability of any information provided with respect to your individual or personal circumstances. Please seek Professional advice from a qualified professional before making any financial decisions. We link to various third-party websites, affiliate sales networks, and to our advertising partners websites. When you view or click on certain links available on our articles, our partners may compensate us for displaying the content to you or make a purchase or fill a form. This will not incur any additional charges to you. To make things simpler for you to identity or distinguish advertised or sponsored articles or links, you may consider all articles or links hosted on our site as a commercial article placement. We will not be responsible for any loss you may suffer as a result of any omission or inaccuracy on the website.
Headlines

Damien Hirst burns artworks after collectors pick their NFTs instead 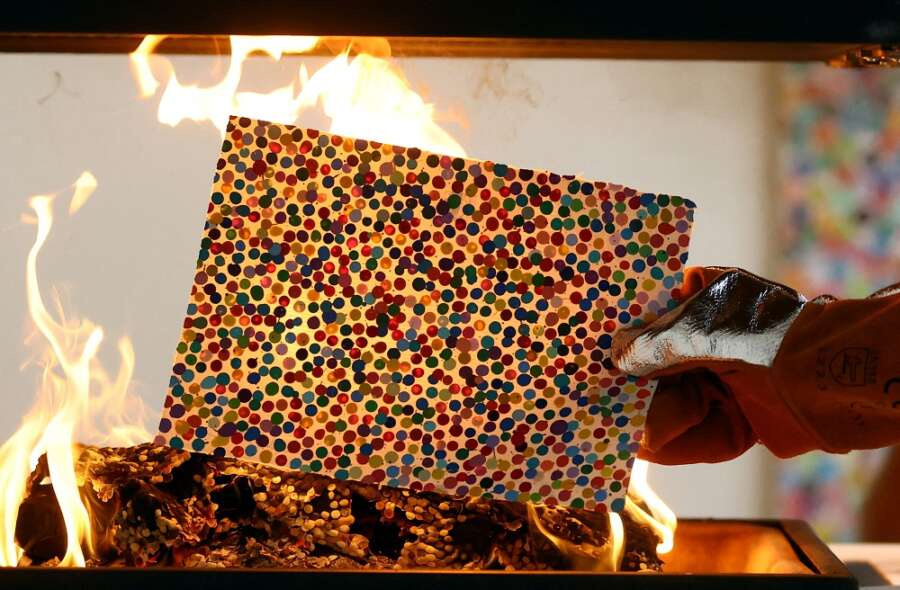 Collectors had to choose between keeping the NFT, which reportedly sold for $2,000, or swapping it for the physical artwork. Some 5,149 picked the latter while 4,851 opted for the NFTs, according to London’s Newport Street Gallery.

It said artworks for non-exchanged NFTs would be destroyed and vice versa. Hirst told his Instagram followers on Monday he would burn 1,000 artworks on Tuesday.

Livestreaming the event, the Turner Prize winner and assistants used tongs to deposit individual pieces stacked in piles into fireplaces in the gallery as onlookers watched.

“A lot of people think I’m burning millions of dollars of art but I’m not, I’m completing the transformation of these physical artworks into nfts by burning the physical versions,” Hirst wrote on Instagram on Monday.

“The value of art digital or physical which is hard to define at the best of times will not be lost it will be transferred to the nft as soon as they are burnt.”

The artworks, created in 2016 with enamel paint on handmade paper and each numbered, titled, stamped and signed, will be burned until “The Currency” exhibition closes on Oct. 30.

NFTs soared in popularity last year as crypto-rich speculators sought to cash in on rising prices but sales volumes have fallen more recently.

Hirst, 57, is known for his divisive works, which include “The Physical Impossibility of Death in the Mind of Someone Living”, consisting of a dead shark floating in formaldehyde and “Mother and Child, Divided”, a bisected cow and calf.

He is also famous for his spot paintings and “For The Love Of God”, a platinum cast of an 18th-century human skull encrusted with diamonds.

Asked how he felt to be burning the works, Hirst said: “It feels good, better than I expected.”

(Reporting by Marie-Louise Gumuchian, additional reporting by Will Russell; Editing by Emelia Sithole-Matarise)

Explainer-Why is Bank of England acting again? What next in the UK crisis?