Home Headlines Dollar creeps up in subdued start to new year
Our website publishes news, press releases, opinion and advertorials on various financial organizations, products and services which are commissioned from various Companies, Organizations, PR agencies, Bloggers etc. These commissioned articles are commercial in nature. This is not to be considered as financial advice and should be considered only for information purposes. It does not reflect the views or opinion of our website and is not to be considered an endorsement or a recommendation. We cannot guarantee the accuracy or applicability of any information provided with respect to your individual or personal circumstances. Please seek Professional advice from a qualified professional before making any financial decisions. We link to various third-party websites, affiliate sales networks, and to our advertising partners websites. When you view or click on certain links available on our articles, our partners may compensate us for displaying the content to you or make a purchase or fill a form. This will not incur any additional charges to you. To make things simpler for you to identity or distinguish advertised or sponsored articles or links, you may consider all articles or links hosted on our site as a commercial article placement. We will not be responsible for any loss you may suffer as a result of any omission or inaccuracy on the website.
Headlines

Dollar creeps up in subdued start to new year 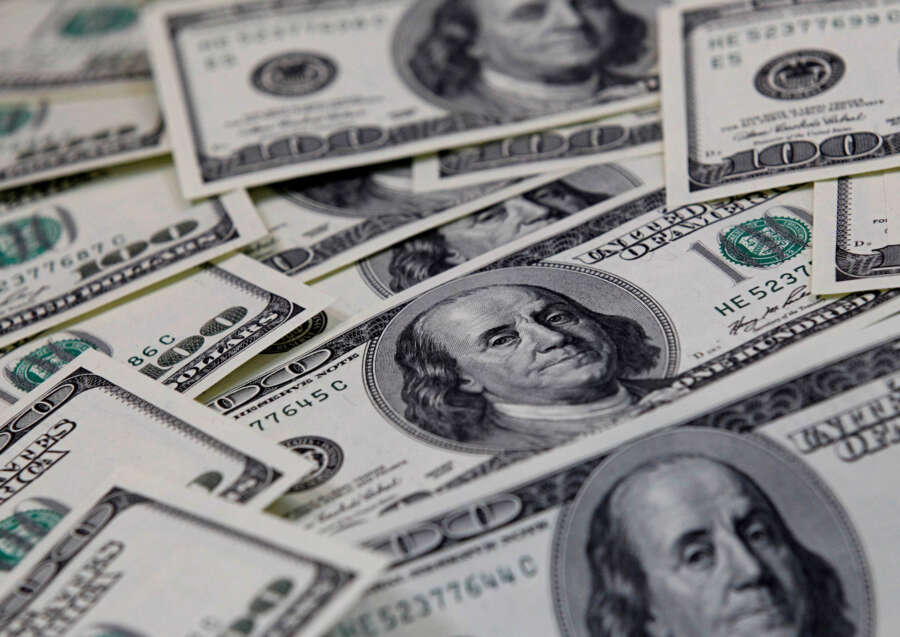 LONDON (Reuters) -The dollar edged up on Monday, pulling away from recent six-month lows against a basket of major currencies.

The U.S. currency has weakened as markets bet a Federal Reserve tightening cycle may be nearing an end.

Sentiment remained fragile and the first trading day of the year was subdued, with many countries, including big trading centres such as Britain and Japan, closed for a holiday.

The dollar index, which measures the value of the greenback against a basket of major currencies, rose by around 0.14% to 103.63 – off roughly six-month lows hit last week at around 103.38.

“There is an attempt by the dollar index to pull higher today but we do see that it is losing a good part of the strength it gained last year,” Ulrich Leuchtmann, head of forex research at Commerzbank, said.

“After the last Fed meeting, the market was not convinced that the Fed won’t cut rates later in 2023. It’s going to be an interesting year.”

Having raised rates by a total of 425 basis points since March to curb surging inflation, the Fed has started to slow the pace of hikes.

That Fed tightening helped lift the dollar index 8% last year in its biggest annual jump since 2015.

Markets remain focused on central banks and inflation, as well as signals of how long and deep a recession might be.

International Monetary Fund Managing Director Kristalina Georgieva said on Sunday that 2023 would be a tough year for the global economy.

Data from China, meanwhile, showed factory activity shrank for the third straight month in December and at the sharpest pace in nearly three years.

But a downturn in euro zone manufacturing activity has likely passed its trough as supply chains recover and inflationary pressures ease, a survey showed on Monday.

S&P Global’s final manufacturing Purchasing Managers’ Index bounced to 47.8 in December from November’s 47.1, matching a preliminary reading but still below the 50 mark separating growth from contraction.

While the euro area economy is heading for a recession, concerns about gas supply over the winter have eased, meaning a downturn may not be as bad as feared a few months ago.

Euro zone wages are growing quicker than thought and the European Central Bank (ECB) must prevent this from adding to already high inflation, ECB chief Christine Lagarde said at the weekend.

“The recent euro strength is driven by a mix of things including both the hawkish ECB commentary and hopes of a peak in U.S. rates,” said Danske Bank chief analyst Piet Haines Christiansen.

“It is also supported by hopes that the energy supply in natural gas is not as bad a situation as feared.”