Home Finance Economic growth risks jolt inflation-obsessed markets
Our website publishes news, press releases, opinion and advertorials on various financial organizations, products and services which are commissioned from various Companies, Organizations, PR agencies, Bloggers etc. These commissioned articles are commercial in nature. This is not to be considered as financial advice and should be considered only for information purposes. It does not reflect the views or opinion of our website and is not to be considered an endorsement or a recommendation. We cannot guarantee the accuracy or applicability of any information provided with respect to your individual or personal circumstances. Please seek Professional advice from a qualified professional before making any financial decisions. We link to various third-party websites, affiliate sales networks, and to our advertising partners websites. When you view or click on certain links available on our articles, our partners may compensate us for displaying the content to you or make a purchase or fill a form. This will not incur any additional charges to you. To make things simpler for you to identity or distinguish advertised or sponsored articles or links, you may consider all articles or links hosted on our site as a commercial article placement. We will not be responsible for any loss you may suffer as a result of any omission or inaccuracy on the website.
Finance 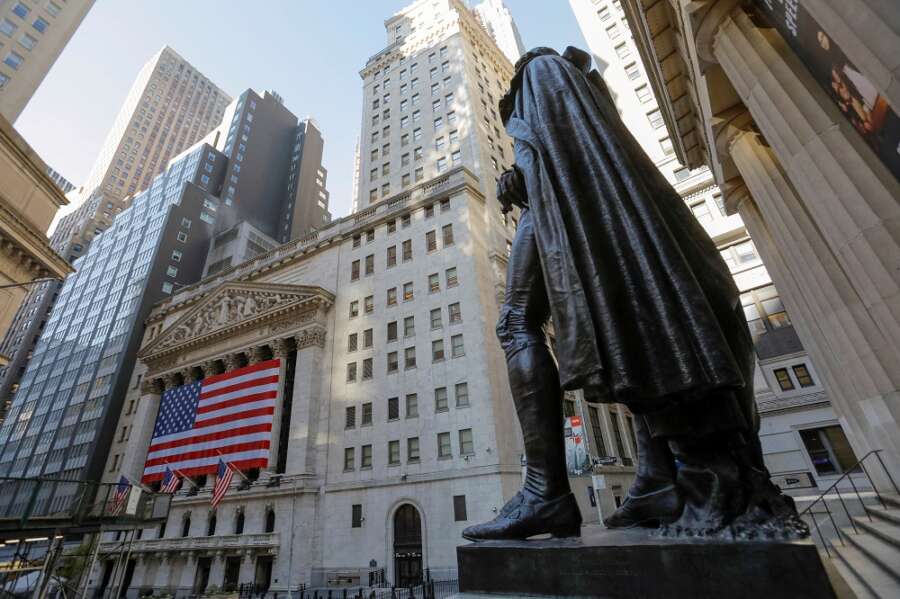 By Sujata Rao and Dhara Ranasinghe

LONDON (Reuters) – After months focusing on central banks’ response to raging inflation, financial markets are being jolted into the realisation that a global economic downturn may now loom.

Sentiment dampeners include the Ukraine war, huge rises in energy and metals prices, aggressive central bank policy tightening led by the U.S. Federal Reserve, and China’s policy of locking down cities to ward off COVID.

Financial analysts too are increasingly pessimistic, with Deutsche Bank seeing an “outright” U.S. recession by end-2023.

Omens are flying in thick and fast.

Investors have reacted by pushing bond yields off recent multi-year highs, driving down oil prices from 14-year peaks and dumping currencies such as the Australian dollar and Brazilian real that had, until recently, surfed the commodity boom.

“The market likes to try and look to the next big thing,” said Craig Inches, head of rates at Royal London Asset Management. “For the last few months, it has been focused purely on inflation but now it’s starting to focus on recession.”

Inches is not in the recession camp, but reckons central banks’ determination to go faster with rate rises “has made people think, well, what does that mean for future growth concerns? Does that mean we are moving towards a harder landing?”

Still, with global inflation at multi-decade highs, the tensions with growth may play out over months, forcing investors and policymakers alike to walk the thin line between the two.

Last week’s stock market selloff, especially weakness in materials and energy, were signs “of the market’s realization that we are now entering the ‘ice phase’ where growth becomes the primary concern for stocks, rather than inflation, the Fed, and interest rates,” Wilson said in a podcast.

World stocks have fallen 8% this month, but cyclical shares, closely correlated with economic growth, have lost 10%. 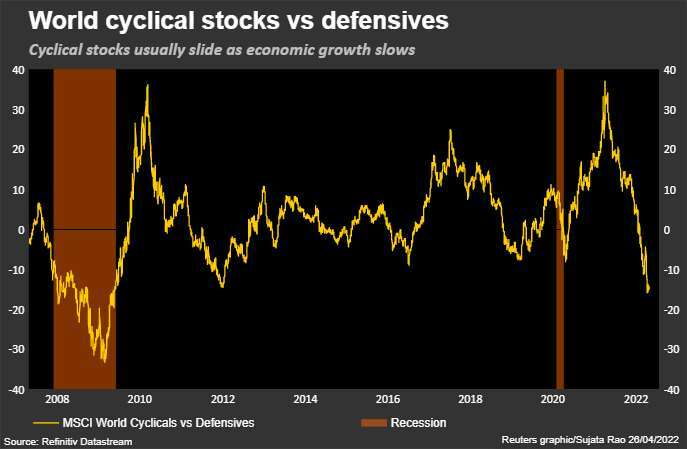 Reading the recession tea leaves is not easy, and economists use a raft of indicators, including signals from equity and bond markets, to interpret the outlook.

The foremost is the U.S. Treasury market, especially the closely-watched gap between 2- and 10-year bond yields. An inversion in this curve — when shorter-dated yields rise above longer counterparts — usually means a recession within two years.

The curve inverted in early-April and is now around 20 basis points, levels that show recession fears remain on investors’ minds.

It is probably too early to say a rethink is underway on where U.S. interest rates might top out, but money market expectations for the so-called terminal rate have eased since Friday by around 30 bps.

That suggests “(the ECB) will tighten too much, so they will (then) need to ease monetary policy”, said Danske Bank chief analyst Piet Christiansen.

Above all, worth noting is China, where a 3.5% yuan decline in April raises questions on whether authorities are permitting currency weakness to support the economy. 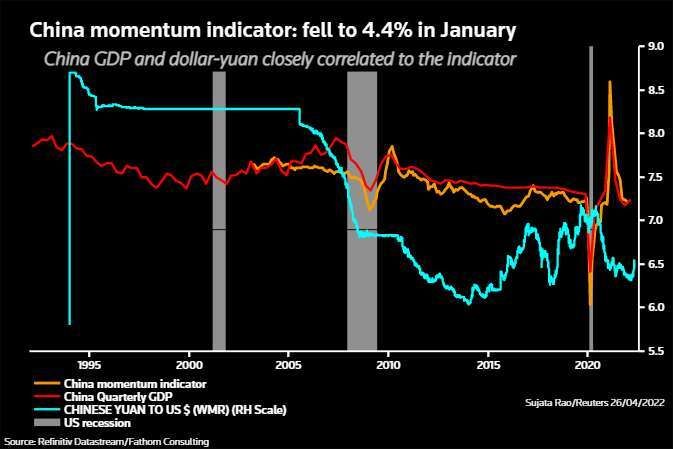 Deutsche Bank aside, few expect a U.S. recession next year. Goldman Sachs for instance sees a 15% probability over the next year, rising to 35% over two years.

“We have been positively surprised how well corporates were able to protect their margins and profitability…so our base case remains a soft landing,” he said.

Still, the uncertainty is bringing some money back to government debt; BofA for instance recommends a ‘long’ Treasuries position, essentially a bet bond prices will rise.