Home Headlines Factbox: Companies potentially affected by Italy’s election
Our website publishes news, press releases, opinion and advertorials on various financial organizations, products and services which are commissioned from various Companies, Organizations, PR agencies, Bloggers etc. These commissioned articles are commercial in nature. This is not to be considered as financial advice and should be considered only for information purposes. It does not reflect the views or opinion of our website and is not to be considered an endorsement or a recommendation. We cannot guarantee the accuracy or applicability of any information provided with respect to your individual or personal circumstances. Please seek Professional advice from a qualified professional before making any financial decisions. We link to various third-party websites, affiliate sales networks, and to our advertising partners websites. When you view or click on certain links available on our articles, our partners may compensate us for displaying the content to you or make a purchase or fill a form. This will not incur any additional charges to you. To make things simpler for you to identity or distinguish advertised or sponsored articles or links, you may consider all articles or links hosted on our site as a commercial article placement. We will not be responsible for any loss you may suffer as a result of any omission or inaccuracy on the website.
Headlines 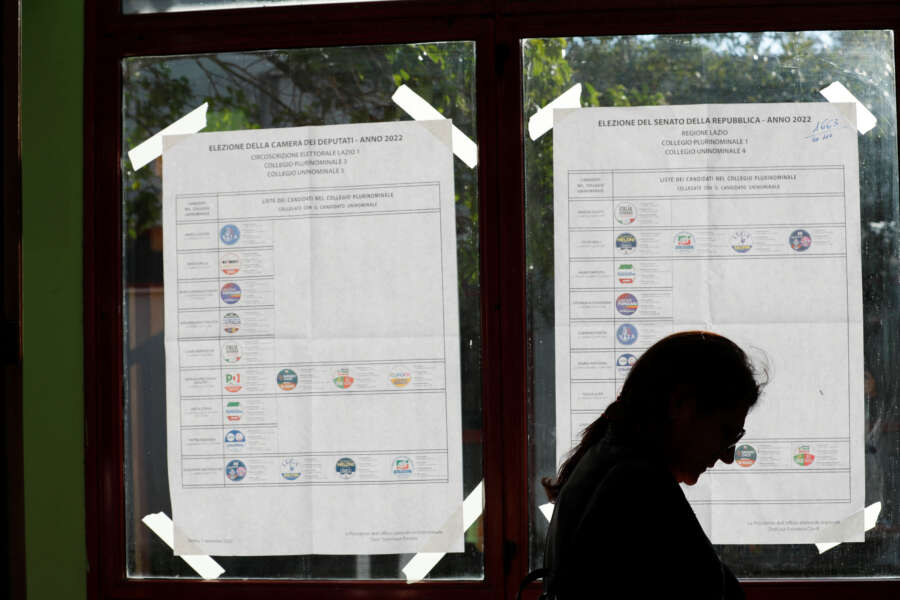 (Reuters) – A right-wing alliance led by Giorgia Meloni’s Brothers of Italy party looks set to win a clear majority in the next parliament, exit polls said on Sunday after voting ended in an Italian national election.

Here is a list of companies that could be affected by the outcome of the election.

Exposed to higher Italian debt yields due to their large holdings of sovereign bonds as well as through their cost of funding, banks are also vulnerable to a worsening of the economic outlook.

The change of government and calls by Meloni to revisit Italy’s national recovery plan could threaten Italy’s ability to meet the commitments to which European Union post-pandemic funds are tied.

Italy’s top bank is the second biggest holder of Italian debt after the European Central Bank, and CEO Carlo Messina has repeatedly called for Rome to use its high level of private wealth and state assets to sustain its debt, achieving “financial independence.”

A new government may offer a clean slate to CEO Andrea Orcel after he walked away from the proposed acquisition of Monte dei Paschi di Siena damaging relations with then Prime Minister Draghi’s government.

The formation of the new government will provide the backdrop to the state-owned bank’s latest cash call in October, which hits markets at a difficult juncture.

The new government will also face the commitment to re-privatise the bank, after the previous executive secured a years-long extension of an end-2021 deadline to cut Rome’s 64% stake in the bank.

Italy has introduced measures to tax energy companies to help fund schemes to shield firms and families from surging power costs. The rightist coalition’s manifesto supports the proposal of a Europe-wide energy price cap, an idea put forward by the current administration that still lacks broad support in Europe.

The right also wants to negotiate with Brussels changes to Italy’s Recovery Plan to increase spending to tackle the energy crisis and relaunch investments in nuclear energy.

ENEL, ENI Meloni ruled out taking full control of national energy groups Eni and Enel, as the French government has done with EDF, while reaffirming it is the government’s duty to shield nationally relevant assets and avoid foreign takeovers.

The new government will decide whether to renew the contracts of the CEOs of Enel and Eni which both come up next year. SNAM The state-controlled gas grid operator in June bought a floating LNG regasification terminal (FSRU) to support efforts to find alternative gas supplies. Snam wants to start work to moor the terminal in Piombino, Tuscany, by the end of October. It aims to connect it to the gas network by next spring to increase LNG imports.

The new government could decide to slow down or accelerate the infrastructure which is already facing resistance from local authorities.

Meloni has spoken out strongly in support of the Western alliance on Ukraine on a number of occasions, with pledges of boosting defence spending.

CEO Alessandro Profumo said on July 28 the state-owned defence group was working to reach a deal for the sale of its OTO Melara cannon maker unit and its naval torpedo unit Wass, but needed a new government in Rome to be able to finalise any potential agreement.

Like the CEOs of Eni and Enel, Profumo’s term comes up for renewal next year.

Brothers of Italy has called for a renationalisation of the telecoms group as part of plans to create a single broadband network in Italy by combining TIM’s landline grid with that of state-owned rival Open Fiber.

That clashes with TIM CEO Pietro Labriola’s strategy of selling TIM’s network to state lender CDP to focus on services.

Brothers of Italy welcomed CDP’s decision to wait for the election before filing its non-binding bid for TIM’s network.

Brothers of Italy has called for the new government to be allowed to make a final decision on ITA..