Home Headlines Factbox-Europe’s summer travel chaos
Our website publishes news, press releases, opinion and advertorials on various financial organizations, products and services which are commissioned from various Companies, Organizations, PR agencies, Bloggers etc. These commissioned articles are commercial in nature. This is not to be considered as financial advice and should be considered only for information purposes. It does not reflect the views or opinion of our website and is not to be considered an endorsement or a recommendation. We cannot guarantee the accuracy or applicability of any information provided with respect to your individual or personal circumstances. Please seek Professional advice from a qualified professional before making any financial decisions. We link to various third-party websites, affiliate sales networks, and to our advertising partners websites. When you view or click on certain links available on our articles, our partners may compensate us for displaying the content to you or make a purchase or fill a form. This will not incur any additional charges to you. To make things simpler for you to identity or distinguish advertised or sponsored articles or links, you may consider all articles or links hosted on our site as a commercial article placement. We will not be responsible for any loss you may suffer as a result of any omission or inaccuracy on the website.
Headlines 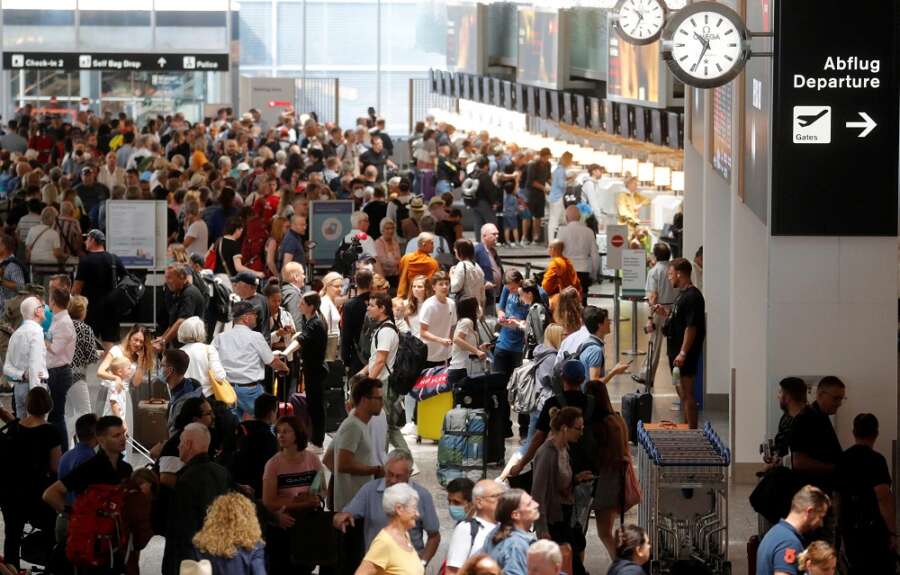 Here is a summary of some of the key developments:

After sweeping job cuts and pay cuts when COVID-19 brought travel to a grinding halt, staff across the industry from pilots to baggage handlers are asking for big pay increases and better working conditions.

Norwegian Air in June agreed a 3.7% pay rise for pilots among other benefits, in a sign of what other airlines may have to offer to avoid labour strife.

Hundreds of British Airway staff based at Heathrow voted on July 22 to call off strike action after accepting a pay offer.

The day before, a three-day strike by refuellers at Britain’s busiest airport was suspended after the employees received a revised offer, a labour union said.

French unions said on July 19 they had reached wage accords for ground staffers after three months of negotiations. The agreement will result in a more than 6% salary increase for some lower salary ranges, while higher-level jobs will see an increase of around 1% to 5%.

SAS and pilot unions reached a wage deal on July 19, ending a 15-day strike that grounded 3,700 flights and put the carrier’s future in doubt.

The airline, which filed for U.S. bankruptcy protection on the second day of the strike, said the industrial action had cost it more than $145 million and affected 380,000 passengers.

The Dutch arm of Air France KLM and unions said on July 14 they had come to a collective labour agreement after weeks of unrest. The agreement includes a two-step pay increase totalling 4% for ground crew with a minimum monthly increase of 80 euros ($80.5) before tax in each phase.

More than 130,000 passengers could be affected from a one-day walkout scheduled on July 27 by Lufthansa’s ground staff. The German flagship carrier said it would cancel over 1,000 flights scheduled for that day, and that there could be a few more cancellations and delays on July 28 and 29.

Spain-based cabin crew at Easyjet in Spain announced plans to go on strike for nine days in July, demanding a 40% increase in their basic salary which is much lower than in countries such as France and Germany, local union USO said. They are also set to strike again between July 29-31

Airlines, including Lufthansa, British Airways, easyJet, KLM and Wizz Air, have cut thousands of flights from their summer schedules to cope with the disruptions, while major airports have also taken steps to limit traffic.

On July 18, flights to and from Britain’s London Luton airport were temporarily disrupted after soaring temperatures caused a defect in its runway, prompting airlines to delay or divert their planes.

Heathrow on July 12 asked airlines to stop selling tickets for summer departures, after it capped the number of passengers travelling through it at 100,000 a day to limit queues, baggage delays and cancellations.

The British government launched an “Aviation Passenger Charter” on July 17 to help passengers know what to do if they are confronted with cancellations, delays or missing baggage with guidance on how to complain if they feel they have been treated unfairly.

Airports and airlines are scrambling to hire more workers from pilots to security and border control staff and baggage handlers after many left during the COVID-19 crisis.

Industry executives say it is hard to recruit for often physically demanding, relatively low paid work at airports often located out of town. Training new hires and getting them security clearance to work at airports also takes months.

One of Europe’s busiest airports needs to hire 500 security staff. It currently has 58,000 workers at and around the airport, 10,000 fewer than before the pandemic.

** Charles de Gaulle and Orly airports in Paris need to fill 4,000 jobs mainly in security, maintenance and travel retail, according to airport operator Groupe ADP and the CDG Alliance.

More than 20,000 people were laid off at Charles de Gaulle during the pandemic, according to the CGT union.

Airport security company ICTS, which operates at Charles de Gaulle, is offering a one-off 180-euro bonus to those delaying their vacation until after Sept. 15 and 150 euros for staff who sign up new recruits, according to a CGT union representative.

** Frankfurt Airport, Germany’s busiest hub, has rehired nearly 1,000 ground services employees after cutting about 4,000 during the pandemic, but will continue to see disruptions due to lack of workers in the next two or three months, its operator Fraport has said.

According to the ADV airport association, about one in five jobs in security, check-in and aircraft handling is unfilled at German airports.