Home Headlines Farewell to the queen: crowds line streets of London and Windsor
Our website publishes news, press releases, opinion and advertorials on various financial organizations, products and services which are commissioned from various Companies, Organizations, PR agencies, Bloggers etc. These commissioned articles are commercial in nature. This is not to be considered as financial advice and should be considered only for information purposes. It does not reflect the views or opinion of our website and is not to be considered an endorsement or a recommendation. We cannot guarantee the accuracy or applicability of any information provided with respect to your individual or personal circumstances. Please seek Professional advice from a qualified professional before making any financial decisions. We link to various third-party websites, affiliate sales networks, and to our advertising partners websites. When you view or click on certain links available on our articles, our partners may compensate us for displaying the content to you or make a purchase or fill a form. This will not incur any additional charges to you. To make things simpler for you to identity or distinguish advertised or sponsored articles or links, you may consider all articles or links hosted on our site as a commercial article placement. We will not be responsible for any loss you may suffer as a result of any omission or inaccuracy on the website.
Headlines

Farewell to the queen: crowds line streets of London and Windsor 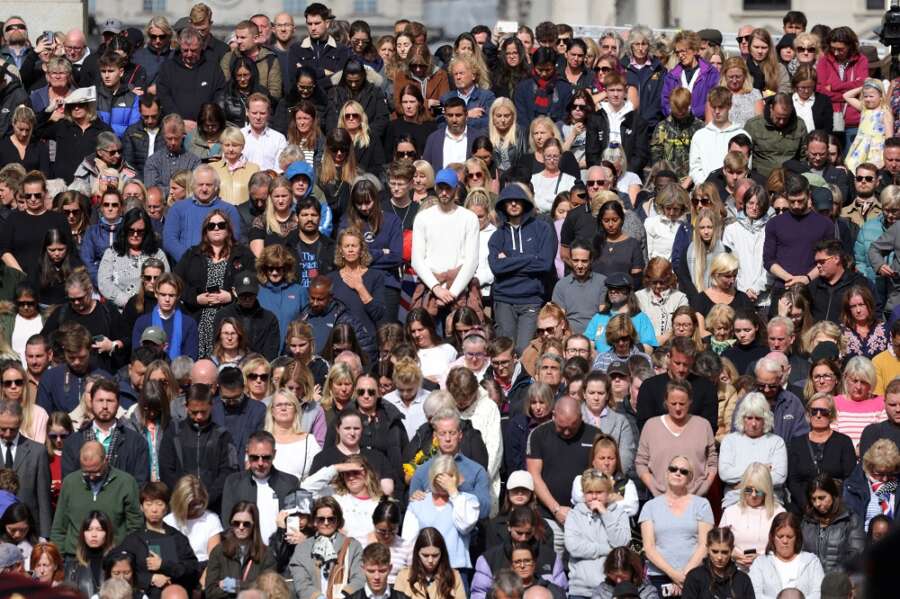 By Andrew MacAskill and Humza Jilani

LONDON/WINDSOR (Reuters) -Tens of thousands gathered in London and Windsor for Queen Elizabeth’s state funeral fell silent and bowed their heads on Monday as they followed the service in Westminster Abbey and then watched the majestic procession of her coffin toward its final resting place.

Some watching in London’s Hyde Park dabbed their eyes and others sobbed during the service https://www.reuters.com/world/uk/britain-world-prepare-say-last-farewell-queen-elizabeth-2022-09-18, while later children were hoisted in the air or put on parents’ shoulders to see her coffin pass.

Couples hugged, others looked lost in their private thoughts and many pulled out camera phones to capture a historic moment, when only the sound of the military band and marching footsteps pierced the stillness.

Crowds followed the funeral service on large television screens or from a radio broadcast on loudspeakers.

They then watched the gun carriage bearing the queen’s coffin pass her Buckingham Palace home and on to Wellington Arch at Hyde Park Corner. From there, it was placed on a hearse and driven to Windsor Castle, west of London.

Many praised the grand state funeral for the pageantry and rousing music that captured how they felt for the queen, who died on Sept. 8 aged 96. She had been on the throne for 70 years, meaning most Britons have known no other monarch.

“I find it hard to express in words what we just witnessed. This was really special and memorable,” said Camilla Moore, 53, from Nottingham after watching the funeral service in London. “It was terribly sad. So very, very sad. The end of an era.”

As the hearse was driven to Windsor, it was strewn with flowers thrown by well-wishers lining the route.

Gurminder Kaur, 50, got up early to drive from Essex in southeast England to Windsor. The queen will be buried https://www.reuters.com/world/uk/queens-final-resting-place-is-small-chapel-historic-windsor-castle-2022-09-19 in the King George VI Memorial Chapel at Windsor Castle.

Kaur, a lawyer, had spent more than 14 hours at the weekend, queuing to see the monarch lying in state in London’s Westminster Hall.

“The (London) queue had a festival atmosphere, and you just had the adrenaline keeping you going,” Kaur said.

“But today, at her final resting place at the castle, the atmosphere is much more sombre.”

‘A LOVING AND CARING PERSON’

Colin Sanders, 61, a retired soldier who had come to London from North Yorkshire to bid farewell to the queen, struggled to hold back tears listening to the ceremony on the Mall, a grand avenue opposite Buckingham Palace.

“It felt like we were there and part of it… it was very moving,” he said.

“I knew I’d well up … She’s like your grandma, a loving and caring person. She said she’d serve the country and that’s what she did.”

The crowds of young and old in London had come from around Britain and beyond, many camping out overnight to secure a good spot for watching the country’s first state funeral since 1965, when World War Two leader Winston Churchill was afforded the honour.

Chloe Jesson, 59, had travelled south from Manchester and said she found the ceremony emotional, moving and dramatic.

“You felt the sadness for the country and her family. At the same time it was a celebration of her life… I occasionally cried, but I was never sad, if that makes any sense,” she said.

“The best thing was there were people from all walks of life, each race and religion and everyone came here to celebrate.”

More than an hour before the funeral service began all viewing areas in central London were declared full. Authorities had said they expected up to a million people might travel to the capital to follow the funeral.

Melanie Odey, 60, a teacher, had camped out in a tent with her two daughters and grandchildren after arriving on Sunday afternoon.

“This is a once-in-a-lifetime opportunity to be part of history, to pay your respects,” she said. The queen “cared so much about this country”.

Some in the crowds were silent and sombre, dressed in black. Others wore bright colours and said they wanted to celebrate the queen’s life.

Anna Kathryn from Richmond, in southwest London, had never met or seen the queen. Yet she said her family felt they had a personal tie with her.

“It is like we have had a death in the family, we couldn’t miss this,” she said. “She was such a bright spot in everyone’s lives and now it feels like that light has gone out.”

Towns and cities all over Britain were broadcasting the state funeral https://www.reuters.com/world/uk/britons-gather-squares-parks-say-goodbye-queen-elizabeth-2022-09-19 and the rest of the day’s events on big screens.

(Reporting by Andrew MacAskill and Stephen Farrell in London and Humza Jilani in WindsorAdditional reporting by Richa Naidu, Peter Hobson, Natalie Grover in London and Lindsay Dunsmuir in EdinburghWriting by Alexandra HudsonEditing by Janet Lawrence and Frances Kerry)