Home Headlines FBI searches Trump’s Florida home as part of presidential records probe
Our website publishes news, press releases, opinion and advertorials on various financial organizations, products and services which are commissioned from various Companies, Organizations, PR agencies, Bloggers etc. These commissioned articles are commercial in nature. This is not to be considered as financial advice and should be considered only for information purposes. It does not reflect the views or opinion of our website and is not to be considered an endorsement or a recommendation. We cannot guarantee the accuracy or applicability of any information provided with respect to your individual or personal circumstances. Please seek Professional advice from a qualified professional before making any financial decisions. We link to various third-party websites, affiliate sales networks, and to our advertising partners websites. When you view or click on certain links available on our articles, our partners may compensate us for displaying the content to you or make a purchase or fill a form. This will not incur any additional charges to you. To make things simpler for you to identity or distinguish advertised or sponsored articles or links, you may consider all articles or links hosted on our site as a commercial article placement. We will not be responsible for any loss you may suffer as a result of any omission or inaccuracy on the website.
Headlines 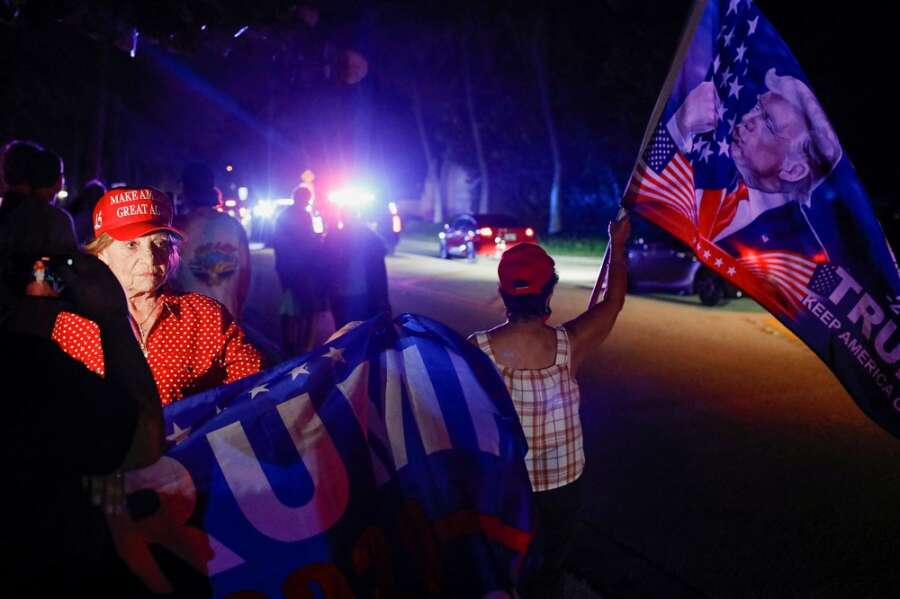 PALM BEACH, Fla. (Reuters) -Former President Donald Trump said FBI agents raided his Mar-a-Lago estate on Monday and broke into his safe in what his son acknowledged was part of an investigation into Trump’s removal of official presidential records from the White House to his Florida resort.

The unprecedented search of a former president’s home would mark a significant escalation into the records investigation, which is one of several probes Trump is facing from his time in office and in private business.

The U.S. Justice Department declined to comment on the search, which Trump in a statement called a raid and said involved a “large group of FBI agents.” The FBI’s headquarters in Washington and its field office in Miami both declined comment.

Eric Trump, one of the former president’s adult children, told Fox News the search concerned boxes of documents that Trump brought with him from the White House, and that his father has been cooperating with the National Archives on the matter for months.

A source familiar with the matter also confirmed to Reuters the raid appeared to be tied to Trump’s removal of classified records from the White House.

Trump said the estate “is currently under siege, raided, and occupied.” He did not say why the raid took place.

“After working and cooperating with the relevant Government agencies, this unannounced raid on my home was not necessary or appropriate,” Trump said, adding: “They even broke into my safe!”

Trump was not present at the time as he was in New York on Monday, Fox News Digital reported, publishing a photo of Trump that a Fox reporter said showed him leaving Trump Tower.

Trump, who has made his club in Palm Beach his home since leaving the White House in January 2021, has generally spent summers at his golf club in Bedminster, New Jersey, because Mar-a-Lago typically closes for the summer.

Any search of a private residence would have to be approved by a judge, after the investigating law-enforcement agency demonstrated probable cause that a search was justified.

It almost certainly would also be approved by FBI Director Christopher Wray, a Trump appointee, and his boss, Attorney General Merrick Garland, who was appointed by Trump’s successor and political rival, President Joe Biden.

Democratic supporters of Biden have criticized Garland for being overly cautious in investigating Trump over his attempts to overturn his 2020 election loss to Biden. A White House official said Biden was not given advance notice of the search and referred queries to the Justice Department.

“Make no mistake, the attorney general had to authorize this,” said Phillip Halpern, a former federal prosecutor who specialized in public corruption cases, adding that Wray and a host of prosecutors would also be involved.

“This is as big a deal as you can have, and … every single person in the chain would have had to sign off on this,” Halpern said.

Trump supporters have accused the Democrats of weaponizing the federal bureaucracy to target Trump, even as Biden has attempted to distance himself from the Justice Department.

In February, Archivist David Ferriero told U.S. House lawmakers that the National Archives and Records Administration had been in communication with Trump throughout 2021 about the return of 15 boxes of records. He eventually returned them in January 2022.

At the time, the National Archives was still conducting an inventory, but noted some of the boxes contained items “marked as classified national security information.”

Trump previously confirmed that he had agreed to return certain records to the Archives, calling it “an ordinary and routine process.” He also claimed the Archives “did not ‘find’ anything.”

The Justice Department launched an early-stage investigation into Trump’s removal of records to the Florida estate, a source familiar with the matter said in April.

Lara Trump, the former president’s daughter-in-law, said he only removed mementos that he was legally authorized to take.

“Look, my father-in-law as anybody knows who’s been around him a lot loves to save things like newspaper clippings, magazine clippings, photographs, documents that he had every authority to take from the White House,” Lara Trump told Fox News.

Several dozen Trump supporters gathered near Mar-a-Lago, which is steps from the ocean, and where several men stood guard next to a dark sport utility vehicle. Police cars parked in the street, lights flashing, as officers directed traffic and kept onlookers from the gates.

Trump supporters honked their horns and played music from their cars as some waved Trump flags or American flags.

“It’s another unjust thing like the made up impeachment hoaxes,” said Jim Whelan, 59, who works in advertising. He held a large sign reading, “Fake News is CNN.”

Trump supporters apparently were expecting him to arrive, as one officer announced on a megaphone: “Trump is not returning to Mar-a-Lago tonight. His trip has been canceled.”