Home Headlines FEATURE-As U.S. flooding worsens, South Carolina redraws risk maps
Our website publishes news, press releases, opinion and advertorials on various financial organizations, products and services which are commissioned from various Companies, Organizations, PR agencies, Bloggers etc. These commissioned articles are commercial in nature. This is not to be considered as financial advice and should be considered only for information purposes. It does not reflect the views or opinion of our website and is not to be considered an endorsement or a recommendation. We cannot guarantee the accuracy or applicability of any information provided with respect to your individual or personal circumstances. Please seek Professional advice from a qualified professional before making any financial decisions. We link to various third-party websites, affiliate sales networks, and to our advertising partners websites. When you view or click on certain links available on our articles, our partners may compensate us for displaying the content to you or make a purchase or fill a form. This will not incur any additional charges to you. To make things simpler for you to identity or distinguish advertised or sponsored articles or links, you may consider all articles or links hosted on our site as a commercial article placement. We will not be responsible for any loss you may suffer as a result of any omission or inaccuracy on the website.
Headlines 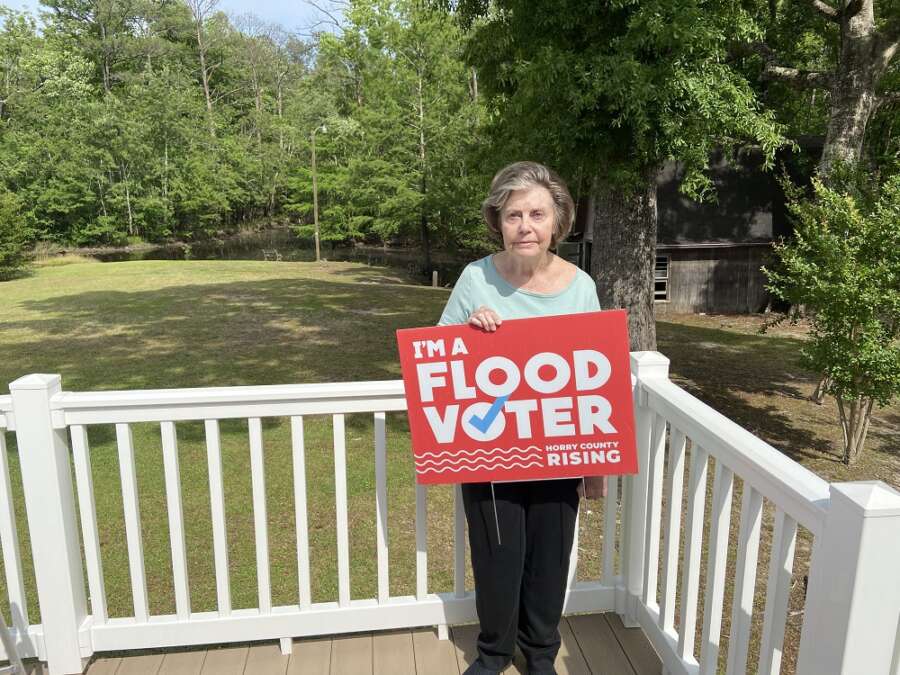 CONWAY, SOUTH CAROLINA, May 24 (Thomson Reuters Foundation) – As Hurricane Florence tore through the southeastern United States in 2018, April O’Leary raced to warn hundreds of her South Carolina neighbors to protect their property from coming floods and consider evacuating.

Her pleas largely fell on deaf ears. Residents in the city of Conway, in Horry County, pointed to past experience with storms as reason not to worry – and for many, national flood maps did not show their homes were at high risk.

“They all told me that they didn’t think they were going to flood – they were not going to make any preparations,” recalled O’Leary, who founded the group Horry County Rising after Florence hit to advocate for greater action to combat flooding.

O’Leary was proven right: Florence deluged hundreds of homes in supposedly lower-risk spots in Horry, according to the county, turning streets into streams and causing millions of dollars in damage that wiped out the savings of some households.

It was not a one-off. Homes outside areas that the Federal Emergency Management Agency (FEMA) saw as being at high risk of flooding have been repeatedly hit by rising waters as climate change brings more frequent and intense storms.

Around the world, governments are struggling to anticipate and respond effectively to fast-evolving climate-related risks like flooding and wildfires.

“We have … Floyd, Charley, Bonnie, Fran, Joaquin,” said O’Leary, as she sat with her neighbor Frances Thomas and they tried to recall which storm had forced Thomas to evacuate from her home. “Welcome to South Carolina … There are so many.”

Officials in Horry County – a conservative area – created their own flood zone maps that took effect last year and showed expanded risk areas, rather than relying solely on FEMA, which is nationally responsible for dealing with disasters.

They also introduced rules requiring new homes in flood-prone areas to be 3 feet (0.91 m), rather than 1 foot, above flood levels – a notable move among ‘red’ or Republican communities, frequently skeptical about climate change.

County officials say the new maps and regulations will help promote flood-resilient buildings and development and provide residents with more reliable information ahead of future floods.

“This is a pretty pro-development, red county that enacted some of the most sweeping flood reform regulations (in the) state of South Carolina – if not the East Coast … If we could do this everywhere, I would recommend it.”

The county also launched an app to give residents and prospective homebuyers a better idea of the risks they face.

“There’s a lot of misinformation out there about flooding,” said Horry County council member Orton Bellamy. “We don’t want anyone coming here and have an experience … (of) not knowing the location (of) floods.”

In the city of Conway, locals took action even earlier. Following the destruction wrought by Hurricane Matthew in 2016, city officials crafted their own flood maps.

Based on previous flood levels, city administrator Adam Emrick said he mobilized employees to knock on doors of people at risk from Hurricane Florence, and convinced some to leave.

“There is no better response during a flood event than to knock on someone’s door and say, you should think about getting out,” he said. “We really do think every year we’re (going to be) having a flood.”

Still, knowing which areas will flood is not always enough to limit all of the damage of particularly severe events.

Emrick remembers the stench after Hurricane Florence in 2018, when stagnant floodwaters, mixed with sewage, oil, diesel and other waste, lingered for weeks.

“All of our sewers (are) underground. When it floods … it all comes up,” he said. “It was awful.”

FEMA’s mapping efforts can be hamstrung by a lack of funding, and localities, armed with better data, can fill the gaps, said Chad Berginnis, executive director of the Association of State Floodplain Managers, a nonprofit.

“My hope is that yes, we do see more communities stepping up … realizing they have flood risk and that the federal government can only do so much,” Berginnis said.

“In most states, you can use that data as part of either your regulatory program or part of your planning – and you should.”

A FEMA spokesperson said its maps represent a “snapshot in time” that cannot capture all hazards but it was working to update them and to “promote preparedness given increasing flood damage due to climate change”.

Despite these grassroots reforms, some residents do not feel safe.

Terri Straka has lived for years in Socastee, about 12 miles (19 km) south of Conway, in a house she said FEMA did not recognize as being at high-risk of flooding until December.

But she estimates she has had about $240,000 of flood-related repairs and expenses since 2015.

“That’s when everything changed,” she said, with high watermarks from earlier floods still visible on buildings near her home. “And it’s just gotten progressively worse.”

Straka said insurance only covered $109,000 of her expenses, leaving out items like storage, moving, and temporary housing.

Straka now has a trailer in her driveway where she can escape with valuables when flood alerts come, while remaining relatively close by to make sure looters do not enter her home.

“They’re smart,” she said. “They know they can get on a boat and they can go up in these homes and just start taking stuff – they do it all the time. It’s like a profession.”

Straka is contemplating a government buyout program that allows flood-prone property owners to sell up and move out of harm’s way but worries she will not get a fair price for her longtime home.

“The very first thing that everyone likes to say is, ‘Well, why don’t you just move?'” she said.

“That just makes my skin crawl. Where do I go? How do I afford that? And why should I have to do that? This is me. This is my ground, you know? I got years in here, and all these memories.”

(Reporting by David Sherfinski. Editing by Megan Rowling and Sonia Elks. Please credit the Thomson Reuters Foundation, the charitable arm of Thomson Reuters, that covers the lives of people around the world who struggle to live freely or fairly. Visit http://news.trust.org)