Home Headlines France’s Macron consolidates poll lead after TV clash
Our website publishes news, press releases, opinion and advertorials on various financial organizations, products and services which are commissioned from various Companies, Organizations, PR agencies, Bloggers etc. These commissioned articles are commercial in nature. This is not to be considered as financial advice and should be considered only for information purposes. It does not reflect the views or opinion of our website and is not to be considered an endorsement or a recommendation. We cannot guarantee the accuracy or applicability of any information provided with respect to your individual or personal circumstances. Please seek Professional advice from a qualified professional before making any financial decisions. We link to various third-party websites, affiliate sales networks, and to our advertising partners websites. When you view or click on certain links available on our articles, our partners may compensate us for displaying the content to you or make a purchase or fill a form. This will not incur any additional charges to you. To make things simpler for you to identity or distinguish advertised or sponsored articles or links, you may consider all articles or links hosted on our site as a commercial article placement. We will not be responsible for any loss you may suffer as a result of any omission or inaccuracy on the website.
Headlines 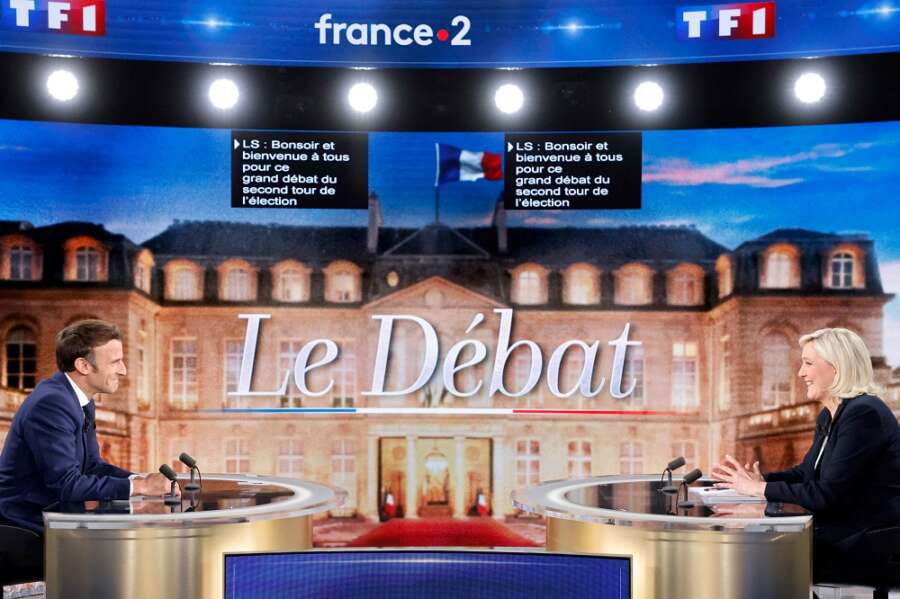 By Elizabeth Pineau and Lucien Libert

With just three days to go before Sunday’s election run-off, the two were back on the campaign trail – Macron in a Paris suburb with a strong left-wing vote, and Le Pen in the north of the country where she has a loyal following.

“Why wait for Macron to step down when, by using your vote, you can fire him?” Le Pen told a rally in the town of Arras in which she urged a “silent majority” opposed to Macron not to facilitate his victory by abstaining.

The latest polls suggested the incumbent was gaining momentum: Three separate surveys all including responses gathered on Thursday after the TV debate showed Macron’s score either stable or slightly rising to reach between 55.5% and 57.5%.

But they also put the turnout rate at between 72% and 74%, which would be the lowest for a presidential run-off since 1969.

Viewers of Wednesday’s televised encounter between the two final candidates deemed Macron prone to bouts of high-handedness with Le Pen but also found him more convincing and fit to be president, a separate Elabe poll for BFM TV showed.

Le Pen, who focused on expressing empathy with people she said had “suffered” since Macron beat her in 2017, was judged slightly more in tune with voters’ concerns but her far-right views were still considered much more worrying, the poll showed.

“Did she give the impression she is ready to govern?” Le Parisien said in an editorial on Thursday. “Judging by the debate, she did not dispel that doubt.”

Other analysts said the debate should be taken with a pinch of salt as only 15.5 million people tuned in to watch it, the smallest audience ever recorded for such an event.

The centrist, former merchant banker Macron is a staunch supporter of the European Union and the kind of internationalism which has in recent years suffered setbacks from events such as Brexit and the election of Donald Trump as U.S. president.

Le Pen says he embodies an elitism that has failed ordinary people. Her policies include a ban on Muslim headscarves in public, giving French nationals priority on jobs and benefits, and limiting Europe’s rules on cross-border travel.

Macron on Thursday sought to win new supporters in a photo opportunity at a boxing club in the Paris suburb of Seine-Saint-Denis: a key target for both candidates which voted heavily for hard-left candidate Jean-Luc Melenchon in the first round.

“Things are not changing quickly enough,” he acknowledged to a gathering of locals there, promising to put more resources into housing, security, education and job opportunities for underprivileged communities.

It is unclear whether the last two days of campaigning will change any votes. Macron’s lead in polls is currently narrower than five years ago, when he beat Le Pen with 66.1% of the vote.

The premium investors demand to hold French bonds over their German equivalent was largely stable on Thursday following the debate, suggesting they are sanguine about Sunday’s vote.

Whoever wins on Sunday will only have done so after a bitter campaign which could bode ill for their capacity to win a parliamentary majority in June and implement reforms.

If Macron wins, he could face a difficult second term, with voters of all stripes likely to take to the streets again over his plan to continue his pro-business reforms.

If Le Pen wins, radical changes to France’s domestic and international policies would be expected, and street protests could start immediately.