Home Headlines How a cheap component could help kill off combustion cars
Our website publishes news, press releases, opinion and advertorials on various financial organizations, products and services which are commissioned from various Companies, Organizations, PR agencies, Bloggers etc. These commissioned articles are commercial in nature. This is not to be considered as financial advice and should be considered only for information purposes. It does not reflect the views or opinion of our website and is not to be considered an endorsement or a recommendation. We cannot guarantee the accuracy or applicability of any information provided with respect to your individual or personal circumstances. Please seek Professional advice from a qualified professional before making any financial decisions. We link to various third-party websites, affiliate sales networks, and to our advertising partners websites. When you view or click on certain links available on our articles, our partners may compensate us for displaying the content to you or make a purchase or fill a form. This will not incur any additional charges to you. To make things simpler for you to identity or distinguish advertised or sponsored articles or links, you may consider all articles or links hosted on our site as a commercial article placement. We will not be responsible for any loss you may suffer as a result of any omission or inaccuracy on the website.
Headlines

How a cheap component could help kill off combustion cars 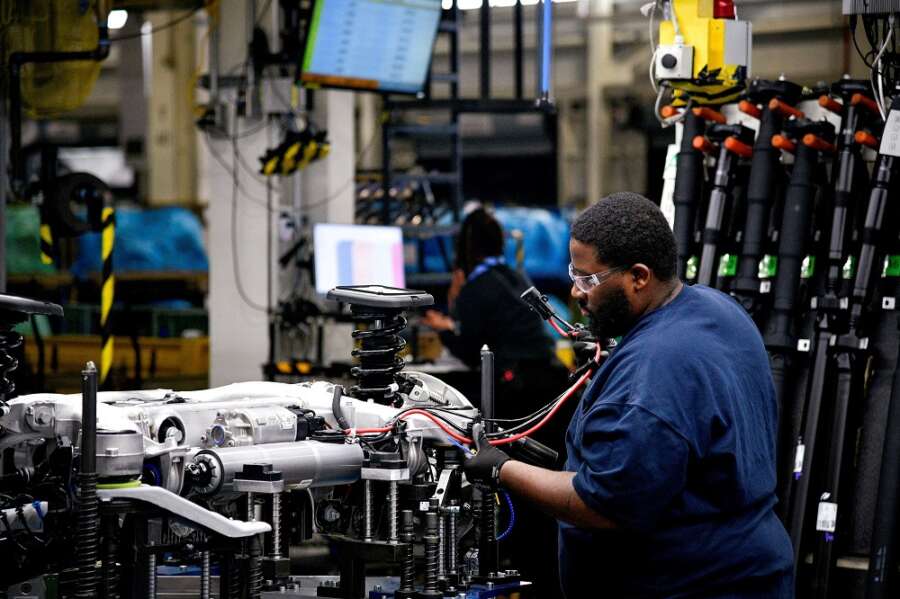 By Nick Carey and Christina Amann

LONDON/BERLIN (Reuters) – The humble wire harness, a cheap component that bundles cables together, has become an unlikely scourge of the auto industry. Some predict it could hasten the downfall of combustion cars.

Supplies of the auto part were choked by the war in Ukraine, which is home to a significant chunk of the world’s production, with wire harnesses made there fitted in hundreds of thousands of new vehicles every year.

These low-tech and low-margin parts – made from wire, plastic and rubber with lots of low-cost manual labour – may not command the kudos of microchips and motors, yet cars can’t be built without them.

The supply crunch could accelerate the plans of some legacy auto firms to switch to a new generation of lighter, machine-made harnesses designed for electric vehicles, according to interviews with more than a dozen industry players and experts.

“This is just one more rationale for the industry to make the transition to electric quicker,” said Sam Fiorani, head of production forecasting firm AutoForecast Solutions.

Gasoline cars still account for the bulk of new car sales globally; EVs doubled to 4 million last year, but still only comprised 6% of vehicle sales, according to data from JATO Dynamics.

Nissan CEO Makoto Uchida told Reuters that supply-chain disruptions such as the Ukraine crisis had prompted his company to talk to suppliers about shifting away from the cheap-labour wire harness model.

In the immediate term, though, automakers and suppliers have shifted harness production to other lower-cost countries.

Mercedes-Benz was able to fly in harnesses from Mexico to plug a brief supply gap, according to a person familiar with its operations. Some Japanese suppliers are adding capacity in Morocco, while others have sought new production lines in countries including Tunisia, Poland, Serbia and Romania.

Harnesses for fossil-fuel cars bundle together cables stretching up to 5 km (3.1 miles) in the average vehicle, connecting everything from seat heaters to windows. They are labour-intensive to make, and almost every model’s is unique, so shifting production is hard to do quickly.

The supply disruptions in Ukraine were a rude awakening for the auto industry. Carmakers and suppliers said that early in the war, plants remained open only thanks to the determination of workers there, who kept a reduced flow of parts moving in the face of power cuts, air-raid warnings and curfews.

Adrian Hallmark, CEO of Bentley, said the British luxury carmaker had initially feared losing 30-40% of its car production for 2022 due to a harness shortage.

“The Ukraine crisis threatened to close our factory fully for several months, much longer than we did for COVID.”

Hallmark said finding alternative production sources was complicated by the fact the conventional harnesses themselves had 10 different parts from 10 different suppliers in Ukraine.

He added that the supply problems had sharpened Bentley’s focus and investment on developing a simple harness for EVs that will be run by a central computer. The carmaker, a division of Volkswagen, plans a fully-electric lineup by 2030.

“The Tesla model, which is a completely different concept of wiring, we couldn’t change to that overnight,” Hallmark added. “It’s a fundamental change in the way that we design cars.”

The new generation of wire harnesses, used by electric natives like Tesla, can be made in sections on automated production lines and are lighter, a key factor because reducing an EV’s weight is crucial for extending range.

Many of the executives and experts interviewed said fossil-fuel cars, which face looming bans in Europe and China, would not be around long enough to justify redesigns to allow them to use next-generation harnesses.

“I wouldn’t put a penny into internal combustion engines now,” said Michigan-based auto consultant Sandy Munro, who estimates EVs will make up half of global new car sales by 2028.

“The future is coming up awful fast.”

Walter GlÃ¼ck, head of Leoni’s harness business, said the supplier was working with carmakers on new, automated solutions for wire harnesses in EVs.

Leoni is focusing on zonal or modular harnesses, which would be split into six to eight parts, short enough for automation in assembly and reducing complexity.

“It’s a change of paradigm,” GlÃ¼ck said. “If you want to reduce production time in your car factory, a modular wire harness helps.”

Among automakers, BMW is also looking at using modular wire harnesses, requiring fewer semiconductors and less cable, which would save space and make them lighter, according to a person with knowledge of the matter.

The person, who declined to be named as they not authorized to speak publicly, said the new harnesses would also make it easier to upgrade vehicles wirelessly – an area Tesla now dominates.

CelLink, a Californian-based startup, has developed an entirely automated, flat and easy-to-install “flex harness”, and raised $250 million earlier this year from companies including BMW and auto suppliers Lear Corp and Robert Bosch.

CEO Kevin Coakley would not identify customers but said CelLink’s harnesses had been installed in close to a million EVs.

Only Tesla has that scale, but the carmaker did not respond to a request for comment.

Coakley said CelLink’s new $125 million factory under construction in Texas will have 25 automated production lines which will be able switch different designs in around 10 minutes because the components are produced from digital files.

The company is working on EVs with a number of carmakers and looking at building another plant in Europe, he said.

While the lead time for changing a conventional wire harness can be up to 26 weeks, Coakley said his company could ship redesigned products in two weeks.

That kind speed is what legacy carmakers are looking for as they go electric, said Dan Ratliff, a principal at Detroit-based venture capital firm Fontinalis Partners, which was founded by Ford Chairman Bill Ford and has invested in CelLink.

For decades, the industry has not needed to move fast to rethink a part like the wire harness, but Tesla has changed that, Ratliff added.

(Reporting by Nick Carey in London and Christina Amann in Berlin; Additional reporting by Satoshi Sugiyama in Tokyo; Editing by Pravin Char)