Home Headlines In Westminster Abbey, the deafening sound of silence to honour Queen Elizabeth
Our website publishes news, press releases, opinion and advertorials on various financial organizations, products and services which are commissioned from various Companies, Organizations, PR agencies, Bloggers etc. These commissioned articles are commercial in nature. This is not to be considered as financial advice and should be considered only for information purposes. It does not reflect the views or opinion of our website and is not to be considered an endorsement or a recommendation. We cannot guarantee the accuracy or applicability of any information provided with respect to your individual or personal circumstances. Please seek Professional advice from a qualified professional before making any financial decisions. We link to various third-party websites, affiliate sales networks, and to our advertising partners websites. When you view or click on certain links available on our articles, our partners may compensate us for displaying the content to you or make a purchase or fill a form. This will not incur any additional charges to you. To make things simpler for you to identity or distinguish advertised or sponsored articles or links, you may consider all articles or links hosted on our site as a commercial article placement. We will not be responsible for any loss you may suffer as a result of any omission or inaccuracy on the website.
Headlines

In Westminster Abbey, the deafening sound of silence to honour Queen Elizabeth 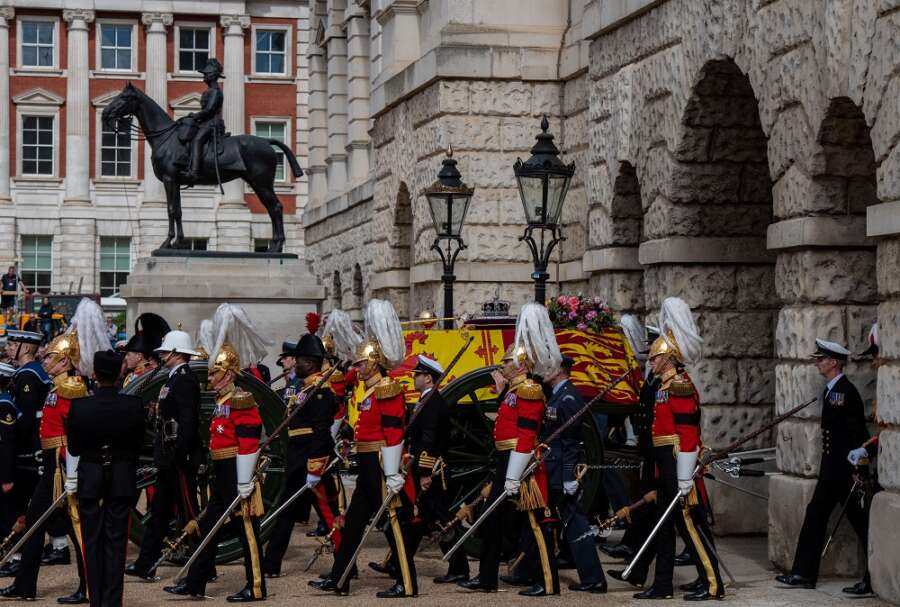 In the building where for a thousand years the monarchs of England and later Britain have been crowned, buried and married, presidents, prime ministers, kings, queens, sultans and an emperor stood still, heads bowed.

World leaders and dignitaries from about 200 countries and territories, some openly hostile to each other, united briefly for two minutes of silence in a show of tribute at the state funeral of Britain’s Queen Elizabeth.

There was no shuffling of feet, barely a cough.

“Few leaders receive the outpouring of love we have seen,” Justin Welby, the Archbishop of Canterbury and head of the Anglican Communion, said in his sermon. The grief of the day was shared not only by those in Britain but across the world, he said.

Some members of Queen Elizabeth’s family had pain etched on their faces as they followed her coffin into the Abbey. Prince Edward, Elizabeth’s youngest son, briefly took out a white handkerchief to wipe away tears.

As the massed ranks of pipers and drummers, leading the cortege bringing Elizabeth’s coffin to the Abbey from nearby Westminster Hall, came nearer and the sound grew louder, there was a palpable sense this was a moment of history.

Elizabeth, who became queen in 1952, provided an almost unique, lingering link to the modern world from the dark days of World War Two; Britain’s oldest and longest-reigning monarch, and a 70-year reign surpassed in length only once before in the history of the world.

As her nation’s first post-imperial monarch, Elizabeth had spent much of her reign watching the British Empire dissipate, making the words of the first hymn at her funeral particularly apt: “So be it, Lord; thy throne shall never, like earth’s proud empires pass away.”

Many in Britain say as queen she had continued to wield a “soft power”, unquantifiable but real, an ability to fascinate as evidenced by the global turnout and response to her death and funeral. Critics say it shows a country clinging to its past.

But, among the congregation, of royalty and soldiers in ceremonial uniforms more in keeping with a past era, there was a taste of the seismic social and political changes that had occurred during the last seven decades.

Not long after becoming queen, her younger sister Princess Margaret had to give up plans to marry a divorced man because it was considered too scandalous. Now, among those invited to her funeral were those she had honoured for their work with the LGBTQ+ community.

Elizabeth, Welby said, had spent her life dedicated to service, and Britain now begins its future without her as its figurehead, leading to questions at home and abroad as to what the future might hold.

At her death, she remained the queen of 15 nations, but some of those, such as Jamaica and the Bahamas, have indicated they wished to join Barbados, which ditched its links to the British throne last year, and become republics.

For the leaders of those realms, Monday’s funeral was likely to represent not just a farewell to Elizabeth but a goodbye to monarchy.

Loyal to the last, queen’s corgis and pony watch her pass