Our website publishes news, press releases, opinion and advertorials on various financial organizations, products and services which are commissioned from various Companies, Organizations, PR agencies, Bloggers etc. These commissioned articles are commercial in nature. This is not to be considered as financial advice and should be considered only for information purposes. It does not reflect the views or opinion of our website and is not to be considered an endorsement or a recommendation. We cannot guarantee the accuracy or applicability of any information provided with respect to your individual or personal circumstances. Please seek Professional advice from a qualified professional before making any financial decisions. We link to various third-party websites, affiliate sales networks, and to our advertising partners websites. When you view or click on certain links available on our articles, our partners may compensate us for displaying the content to you or make a purchase or fill a form. This will not incur any additional charges to you. To make things simpler for you to identity or distinguish advertised or sponsored articles or links, you may consider all articles or links hosted on our site as a commercial article placement. We will not be responsible for any loss you may suffer as a result of any omission or inaccuracy on the website.
Home News Jefferies COVID case outbreak casts pall over Wall St’s office return
News 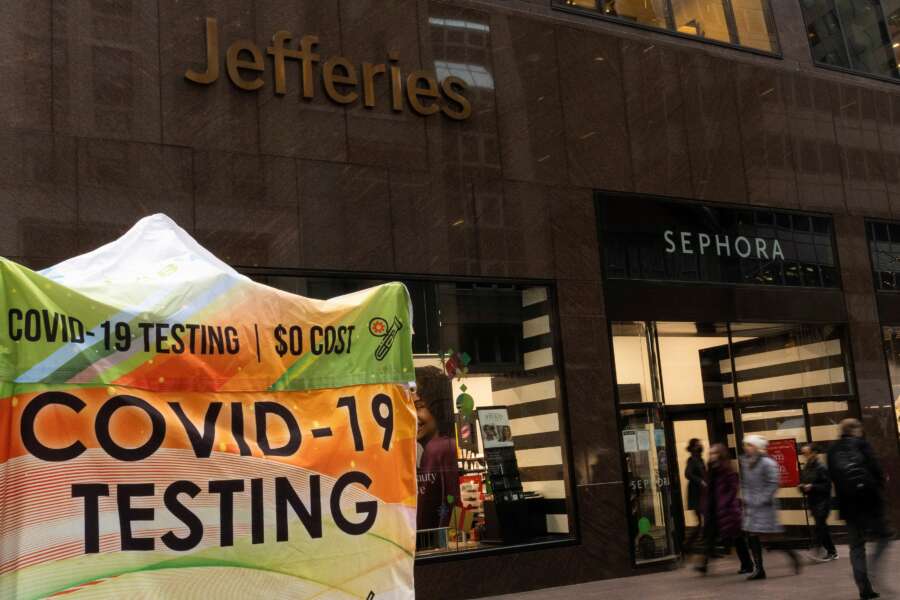 (Reuters) – Investment bank Jefferies Financial Group on Wednesday asked staff to work from home again due to a spate of COVID-19 cases, raising questions about banks’ efforts to return to business as usual.

U.S. banks have been more assertive than other industries in encouraging employees back to the office, but those plans have come under renewed scrutiny due to the rapid spread of the Omicron variant.

Jefferies said it was also cancelling client parties and virtually all travel. The firm’s disclosure prompted speculation about whether other banks will follow suit.

“Those financial institutions and Wall Street firms that believed there will be an automatic return to work and were pushing for that are going to reexamine their current return to work status especially given employees’ concerns,” said Brian Marks, a former banking regulator and now senior lecturer at the University of New Haven’s business school.

Jefferies, with its headquarters in midtown Manhattan, had called its staff back to offices in October. The bank has felt the pandemic’s impact acutely, as its Chief Financial Officer Peg Broadbent died due to coronavirus complications in March 2020.

“Our priority now is to best protect every one of you and your families,” wrote Chief Executive Richard Handler in a memo seen by Reuters. “Effective today, we are cancelling all social events and entertainment until January 3rd.”

Jefferies added in the memo that while it was “beyond eager for all of our people to be back in our offices…When you can, we ask that you work from home.”

The firm has had more than 40 new COVID-19 cases this month including 10 on Tuesday, the memo said, adding only very few cases required hospitalization. Handler added that Jefferies was re-imposing a mask mandate in all offices, regardless of vaccination status.

Jefferies, which had seen attendance average as high as 60% many days globally in recent weeks, said it will require booster shots by Jan. 31.

The investment bank, which has 4,500 employees worldwide, also has offices in Asia and Europe. More than 95% of Jefferies staff are now vaccinated, and all visitors to Jefferies’ offices must be fully vaccinated, Handler said in the memo.

Jefferies did not say where the staff with COVID worked.

New York set a vaccine requirement for workers at all private companies as the highly transmissible Omicron variant pushes into more U.S. states. The New York City Mayor’s office and New York Department of Financial Services did not respond to requests for comment on the Jefferies cases.

Most major U.S. banks have had staff working in offices since the summer. Senior bankers such as Goldman Sachs Chief Executive David Solomon and Morgan Stanley Chief Executive James Gorman have spoken of the benefits of in-person interaction, particularly for younger employees.

So far, U.S. banks are sticking to their existing COVID-19 policies although sources at the “big six” firms say they are keeping a close watch on developments.

Goldman Sachs, Morgan Stanley and JPMorgan have had most workers back at offices on a rotational basis since the summer.

Others, like Wells Fargo, Citigroup and Bank of America, have taken a more flexible stance.

Wells Fargo pushed its return-to-office plans back to January, while Citigroup employees in New York, Chicago, Boston, Philadelphia and Washington, D.C. have been working from the office at least two days a week since Sept. 13.

Some U.S. banks are also choosing not to host holiday parties. Wells Fargo said Wednesday it had no firm-wide celebrations planned. Team parties are at the discretion of individual managers. Citi will not host holiday parties this year to help prevent the spread of COVID-19, a source familiar with the matter said.

In Europe, where Omicron has spread more rapidly, some banks have cancelled events such as JPMorgan’s annual festive carols reception in London and year-end party in Paris.

Deutsche Bank has told its London staff they can hold small gatherings at the team level. Asset manager Schroders and the City of London Corporation, which runs London’s historic financial district, ask guests to take rapid tests before some festive events.

Some large U.S. companies are also pushing back their office-return date due to the Omicron variant.

Businesses “have to do a balancing act,” said Marks. “While it’s really important to get people back together, (concern over COVID-19) could sever the relationship to the point of no return, leading employees to look for other jobs.” (This story corrects number of Jefferies employees worldwide in 10th paragraph to 4,500, not 3,000)