Home Headlines London’s Battersea Power Station reborn as office and shopping hub
Our website publishes news, press releases, opinion and advertorials on various financial organizations, products and services which are commissioned from various Companies, Organizations, PR agencies, Bloggers etc. These commissioned articles are commercial in nature. This is not to be considered as financial advice and should be considered only for information purposes. It does not reflect the views or opinion of our website and is not to be considered an endorsement or a recommendation. We cannot guarantee the accuracy or applicability of any information provided with respect to your individual or personal circumstances. Please seek Professional advice from a qualified professional before making any financial decisions. We link to various third-party websites, affiliate sales networks, and to our advertising partners websites. When you view or click on certain links available on our articles, our partners may compensate us for displaying the content to you or make a purchase or fill a form. This will not incur any additional charges to you. To make things simpler for you to identity or distinguish advertised or sponsored articles or links, you may consider all articles or links hosted on our site as a commercial article placement. We will not be responsible for any loss you may suffer as a result of any omission or inaccuracy on the website.
Headlines 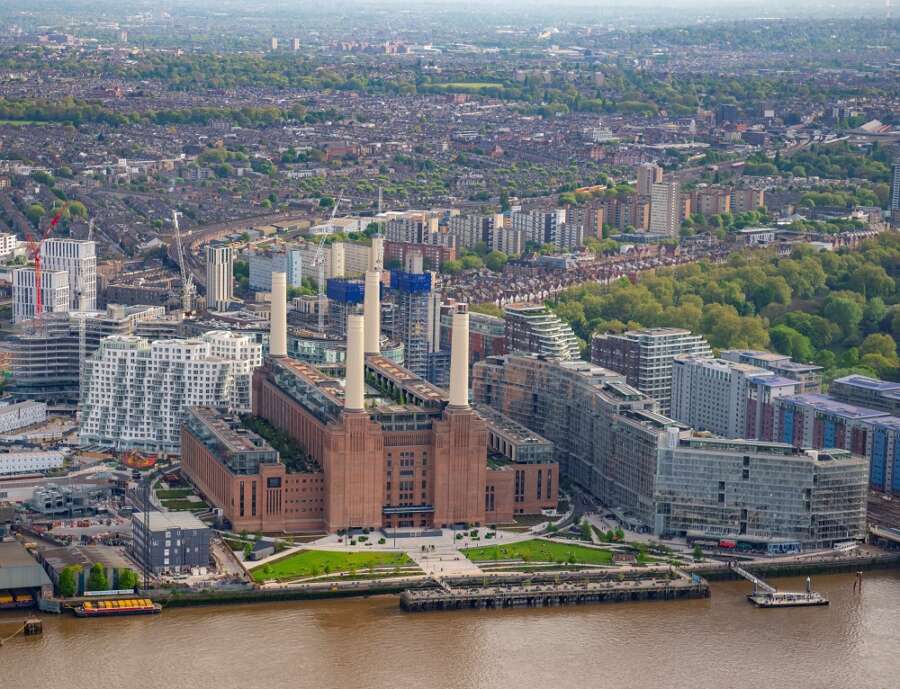 LONDON (Reuters) – London’s Battersea Power Station reopens next week as a glitzy hub of offices, flats, restaurants and shops after decades of failed attempts to reinvigorate one of the capital’s most iconic buildings, often described as the “Everest of real estate”.

The 1930s power station once supplied a fifth of London’s electricity, including to Buckingham Palace and parliament, but is better known for featuring alongside a floating inflatable pig on the cover of Pink Floyd’s 1977 album “Animals”.

The colossal brick building earned its reputation as one of London real estate’s toughest challenges after a series of false starts, including an attempt to recreate it as a theme park.

Its 9-billion-pound ($10.2 billion) redevelopment, backed by a group of Malaysian investors, will see thousands of people living and working in and around the once-derelict station after its formal opening on Oct. 14.

Apple will become the largest office tenant, occupying six floors in the former central boiler house of the power station, known for its four white chimneys that dominate the skyline over the south bank of the River Thames.

About 96% of the commercial space has been filled up, Battersea Power Station Development Company boss Simon Murphy told reporters on Tuesday.

“It has taken a lot of hard work, determination, and the continued commitment of the Malaysian shareholders over the past ten years to bring Battersea Power Station back to its former glory,” Murphy said, noting the cost of restoring the station was 2 million pounds per day at its peak.

The Battersea project, spread over an area the size of 32 soccer fields, got a major boost from the opening last year of a London Tube station a two-minute walk away, partly funded by the development company.

The coal-fired power station was shut down completely in 1983.

Its redevelopment will see more than 250 apartments starting at 865,000 pounds apiece around the power station, in addition to commercial space that should bring in 100 million pounds of rent annually, Murphy said.

The project will also bring dozens of retailers including Zara, Hugo Boss and Ralph Lauren, besides restaurants including a 1950s-themed bar at the site of the station’s Control Room B, replete with now-defunct mechanical switches and dials.

Indeed, much of the project has focused on retaining an industrial flavour, from its exposed brick walls and a large, rusty crane left hanging in the central hall, to escalators with transparent side panels displaying their inner machinery.

For views of London’s skyline, visitors will be able to take a lift 109 metres up to the top of one of the chimneys, rebuilt over three years with 25,000 wheelbarrows of hand-poured concrete to match original design specifications.

“We want to make sure that people, when they come inside the building, they realise that this was a power station and don’t think is a brand new building,” said Sebastian Ricard, one of the architects involved in the redevelopment.