Home Headlines Marketmind: Hawk-eyed
Our website publishes news, press releases, opinion and advertorials on various financial organizations, products and services which are commissioned from various Companies, Organizations, PR agencies, Bloggers etc. These commissioned articles are commercial in nature. This is not to be considered as financial advice and should be considered only for information purposes. It does not reflect the views or opinion of our website and is not to be considered an endorsement or a recommendation. We cannot guarantee the accuracy or applicability of any information provided with respect to your individual or personal circumstances. Please seek Professional advice from a qualified professional before making any financial decisions. We link to various third-party websites, affiliate sales networks, and to our advertising partners websites. When you view or click on certain links available on our articles, our partners may compensate us for displaying the content to you or make a purchase or fill a form. This will not incur any additional charges to you. To make things simpler for you to identity or distinguish advertised or sponsored articles or links, you may consider all articles or links hosted on our site as a commercial article placement. We will not be responsible for any loss you may suffer as a result of any omission or inaccuracy on the website.
Headlines 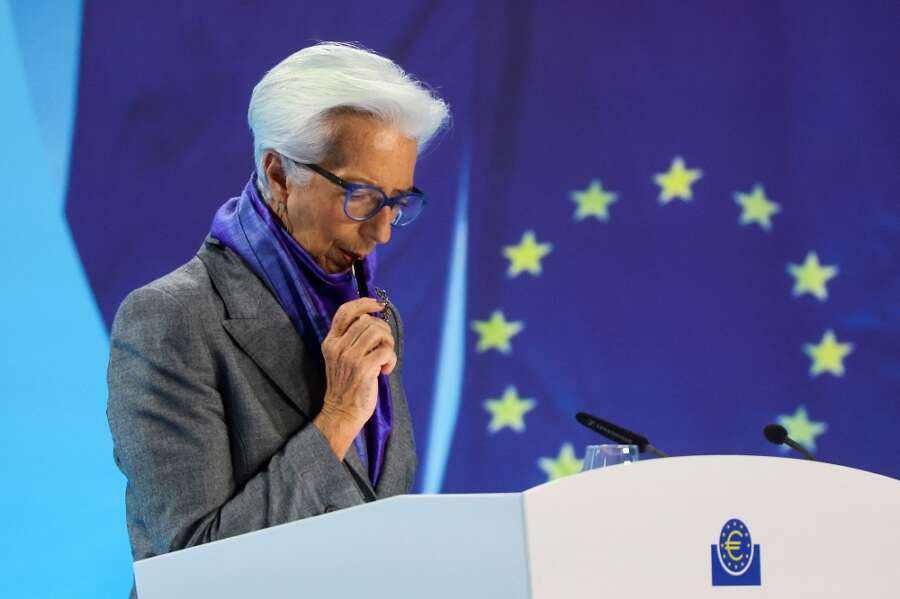 Investors have hunkered down with their risk-off hat on, after a central bank bonanza this week (that’s seven central banks on Thursday and the Fed on Wednesday, for those counting) made it clear that interest rates will go up in 2023 for most countries as the battle against inflation rages on.

European Central Bank President Christine Lagarde’s forceful hawkish rhetoric has played Grinch, with little sign yet of a Santa rally as we head towards Christmas and the New Year. Asian equities look set to end the week in the red, snapping their six-week winning streak, while the U.S. dollar straightened its crown as a safe-haven after a recent wobble.

“The market wanted a metaphorical hug that everything will be OK, but central banks have pushed real rates higher,” said Chris Weston, head of research at Pepperstone.

And so, investors will parse every inch of economic data coming through in the near term to gauge inflationary pressures and recessionary signals, with flash PMI data from the Eurozone and the UK on deck for the day.

China was ramping up vaccinations, especially for the elderly, and building stocks of ventilators, essential drugs and test kits in rural areas as the country braces for a surge in COVID-19 cases, while many city dwellers were planning holidays for the first time since the pandemic began.

The initial exuberant reaction to the dismantling of China’s zero-COVID policy has quickly given way to worries that the world’s second biggest economy may be unprepared for the wave of infections to come.

Nearly 200 Chinese companies, including Alibaba and Baidu, heaved a sigh of relief after the U.S. accounting watchdog said it has full access to inspect and investigate firms in China, removing the risk that these companies could be booted off U.S. stock exchanges.

Of course, the worry remains on what the audit is likely to reveal, and that has put a lid on gains for these stocks.

Meanwhile, Twitter suspended the accounts of several prominent journalists who recently wrote about its new owner Elon Musk, with the billionaire tweeting that rules banning the publishing of personal information applied to all, including journalists. “Some time away from Twitter is good for the soul,” Musk tweeted.

Key developments that could influence markets on Friday: