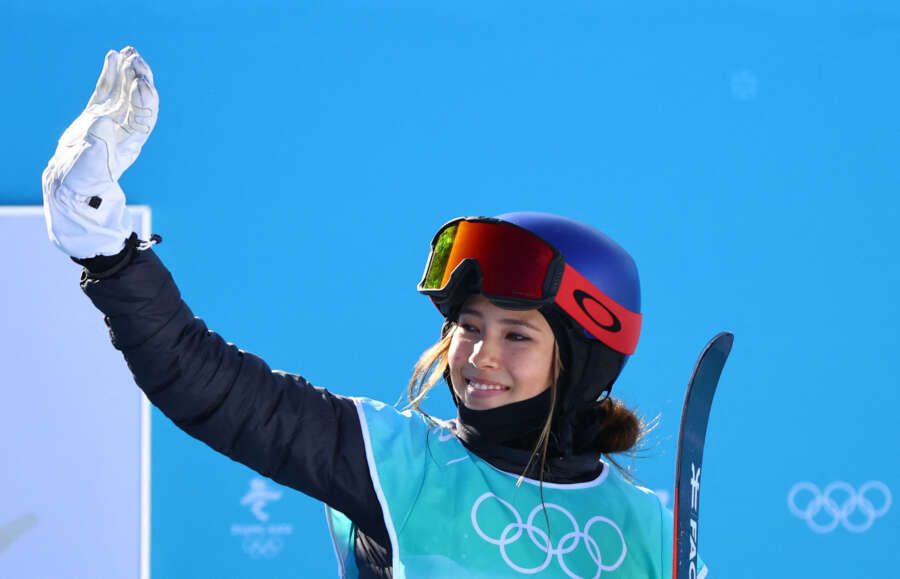 By Julien Pretot and Krystal Hu

BEIJING (Reuters) -China’s Eileen Gu got her maiden Olympics off to a dream start as the U.S. born teenager landed a tricky jump to become the first freeski Big Air champion at the Beijing Games, taking the host country to the top of the medals table on Tuesday.

With the Shougang steel mill in the backdrop, Gu landed in the final run a 1620, a trick only Tess Ledeux had achieved in competition before. The Frenchwoman settled for silver.

Ledeux was leading after two runs but pressure got to the Big Air World Cup leader and she struggled on her final jump, ending up in tears while the crowds erupted in cheers for Gu.

Swiss Mathilde Gremaud took the bronze, unable to turn things around in the final run as she crashed.

“I’ve never done the 16 before, I haven’t really prepared for it that much either,” the 18-year-old Gu said.

“I think I did two days on the airbag but I’ve spent a lot of hours visualizing it if that counts. Generally I’ve visualized for about an hour and a half before bed every day.

“Tess inspired me a lot with this jump. So even if she may be sad, this gold medal also belongs to her.”

Chinese tennis player Peng Shuai, wearing a black knit hat with the Olympic rings on them, watched and waved from the stands as Gu won the Big Air gold.

It first appeared that Gu, a fashion model and incoming Stanford University student, still had a lot to learn when ‘Air France’ Ledeux landed her double cork 1620 in the first run.

Already assured of a podium finish, Gu went for Ledeux’s double cork 1620 and achieved it, holding her head in disbelief in the finish area under the eyes of her mother.

“So my mum called me before my last jump and she told me not to do the 16. She told me to do the right 14 again and to see if I could do it better. But I kind of was adamant that I wanted to do the left 16,” said Gu, whose phone screen saver has been a gold medal for months.

Despite an imperfect landing, she scored 94.50 – Ledeux’s score in the first run, which took Gu’s tally up to 188.25 and earned her a 0.75 final advantage over the Frenchwoman.

“She has been skiing for a long time but she is new on the big stage. What she’s been doing is incredible,” said Gremaud.

Gu, who has nearly two million followers on China’s Twitter-like Weibo, will have more opportunities to increase her popularity as she participates in the slopestyle and halfpipe events in Beijing.

Minutes after Gu won Big Air gold, eight of the top 10 searches on Weibo were related to her.

China have so far won three gold and two silver medals at the Winter Games, leading the medals tally, while Sweden is at second place with three golds.