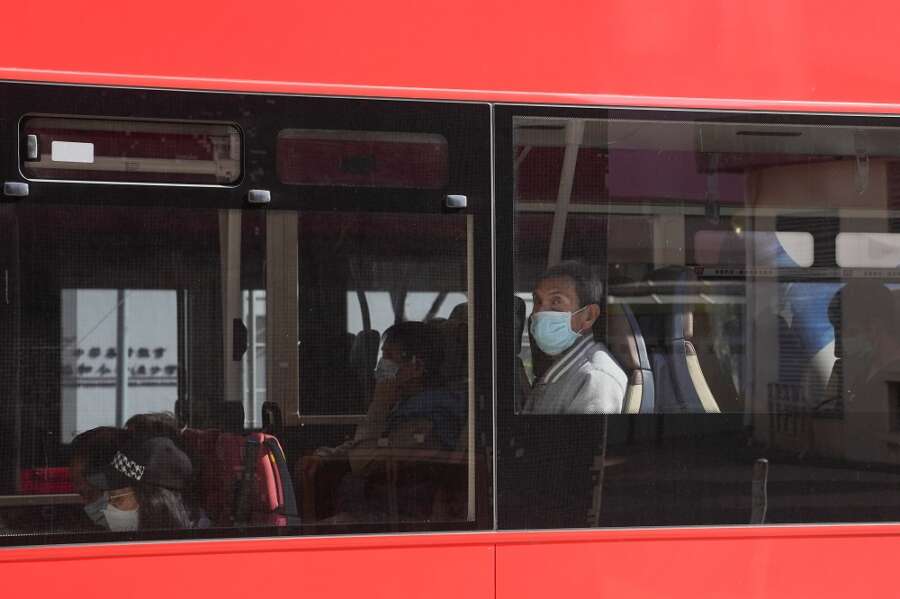 By Ludwig Burger and Emma Thomasson

FRANKFURT/BERLIN (Reuters) – Financial markets fell sharply on Tuesday after the head of drugmaker Moderna said existing COVID-19 vaccines would be less effective against the new Omicron variant, but they recovered strongly after more reassuring comments from European officials.

Andrea Ammon, chair of the European Centre for Disease prevention and Control (ECDC), said the cases of Omicron so far confirmed in 10 European Union countries were mild or without symptoms, although in younger age groups.

Major European stock markets, spooked by fears that vaccine resistance https://www.reuters.com/world/how-worried-should-we-be-about-omicron-variant-2021-11-27 might trigger restrictions that would choke off a nascent recovery, were down about 0.5% at around 1500 GMT, having fallen as much as 1.5% in early trade. [MKTS/GLOB]

“I think it’s going to be a material drop. I just don’t know how much because we need to wait for the data. But all the scientists I’ve talked to . . .are like ‘this is not going to be good’.”

The University of Oxford said there was no evidence that current vaccines would not prevent severe disease from Omicron https://www.reuters.com/business/healthcare-pharmaceuticals/how-fast-does-it-spread-scientists-ask-whether-omicron-can-outrun-delta-2021-11-29, but that it was ready to rapidly update its shot, developed with AstraZeneca, if necessary. 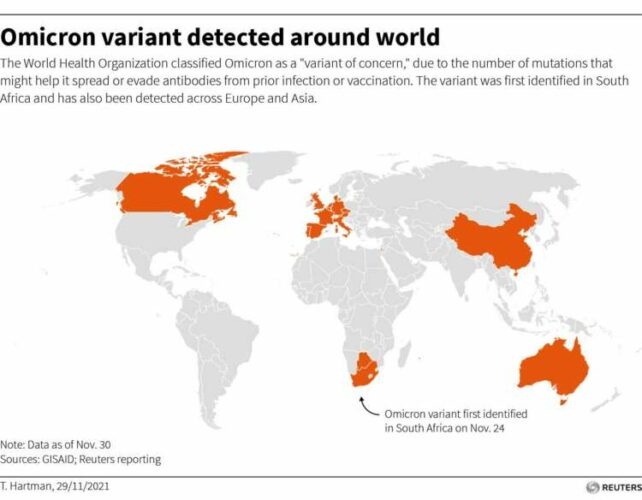 Regeneron Pharmaceuticals said its COVID-19 antibody cocktail and other similar antiviral treatments could be less effective against the latest variant.

News of Omicron’s emergence had wiped roughly $2 trillion off global stocks on Friday, after it was identified in southern Africa and announced on Nov. 25.

Yet Dutch authorities said the variant had been detected in the Netherlands as early as Nov. 19, before two flights arrived from South Africa that were known to have carried the virus.

Cooke said lab tests for “cross neutralisation” would take about two weeks. If there were a need to change COVID-19 vaccines, new ones could be approved within three or four months, she added.

“Vaccination will likely still keep you out of the hospital,” said John Wherry, director of the Penn Institute for Immunology in Philadelphia.

Moderna and fellow drugmakers BioNTech and Johnson & Johnson are already working on vaccines that specifically target Omicron. Moderna has also been testing a higher dose of its existing booster.

But border closures have already cast a shadow over economic recovery just as parts of Europe see a fourth wave of infections as winter sets in.

Bank of England policymaker Catherine Mann added to downbeat comments from U.S. Fed Chairman Jerome Powell by saying Omicron could hit consumer confidence, which would not only weaken the British economy’s recovery but could also could push up inflation at the same time.

Many of the new travel restrictions have focused, to South Africa’s fury, on banning flights to and from southern Africa.

Japan confirmed its first case of the new variant on Tuesday, in a traveller from Namibia. Australia found that a person with Omicron had visited a busy shopping centre in Sydney while probably infectious. 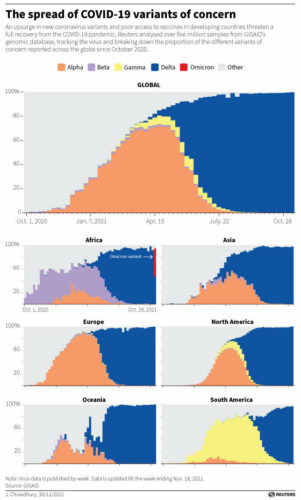 (GRAPHIC: The spread of COVID-19 variants of concern – https://graphics.reuters.com/HEALTH-CORONAVIRUS/VARIANTS/jznpnyoorvl/spread_of_voc.jpg)

Britain and the United States have both pushed their booster programmes in response to the new variant. London said international arrivals would have to self-isolate until they get a negative result in a PCR test.

Greece said vaccination would be compulsory for the over-60s, the group seen as most vulnerable to COVID-19.

Australia on Monday delayed the reopening of its international borders by two weeks, less than 36 hours before foreign students and skilled migrants were to be allowed back.

But in Germany, a current hotspot of the previous significant variant, Delta, the seven-day average infection rate fell slightly for the first time in three weeks after new restrictions to slow transmission.

Neighbouring Austria, which imposed its fourth full lockdown last week after a surge in infections, also registered a drop.

But France registered its highest daily infection tally since April.

And the Dutch health authority said Omicron was already spreading in the Netherlands, where intensive care beds are running out and measures including restrictions on hospitality have yet to take effect.

The curbs on travellers from southern Africa have highlighted the inequality of vaccine distribution, which may have given the virus more opportunities to mutate.

WHO head Tedros Adhanom Ghebreyesus said he understood concerns about Omicron, but added:

“I am equally concerned that several member states are introducing blunt, blanket measures that are not evidence-based or effective on their own, and which will only worsen inequities.”

The passenger liner Europa was docking in Cape Town on Tuesday in what was meant to be the official start of the first cruise ship season in South Africa’s top tourist hub since the pandemic.

After Omicron was discovered while they were at sea, many passengers were expected to fly straight home.

Central banks opt for shock and awe to...

How will the ECB contain fragmentation risk in...

Back to the land: Lebanese family turns to...

June 13, 2022
Editorial & Advertiser disclosureEditorial & Advertiser disclosureOur website provides you with information, news, press releases, Opinion and advertorials on various financial products and services. This is not to be considered as financial advice and should be considered only for information purposes. We cannot guarantee the accuracy or applicability of any information provided with respect to your individual or personal circumstances. Please seek Professional advice from a qualified professional before making any financial decisions. We link to various third party websites, affiliate sales networks, and may link to our advertising partners websites. Though we are tied up with various advertising and affiliate networks, this does not affect our analysis or opinion. When you view or click on certain links available on our articles, our partners may compensate us for displaying the content to you, or make a purchase or fill a form. This will not incur any additional charges to you. To make things simpler for you to identity or distinguish sponsored articles or links, you may consider all articles or links hosted on our site as a partner endorsed link.