Our website publishes news, press releases, opinion and advertorials on various financial organizations, products and services which are commissioned from various Companies, Organizations, PR agencies, Bloggers etc. These commissioned articles are commercial in nature. This is not to be considered as financial advice and should be considered only for information purposes. It does not reflect the views or opinion of our website and is not to be considered an endorsement or a recommendation. We cannot guarantee the accuracy or applicability of any information provided with respect to your individual or personal circumstances. Please seek Professional advice from a qualified professional before making any financial decisions. We link to various third-party websites, affiliate sales networks, and to our advertising partners websites. When you view or click on certain links available on our articles, our partners may compensate us for displaying the content to you or make a purchase or fill a form. This will not incur any additional charges to you. To make things simpler for you to identity or distinguish advertised or sponsored articles or links, you may consider all articles or links hosted on our site as a commercial article placement. We will not be responsible for any loss you may suffer as a result of any omission or inaccuracy on the website.
Home Headlines Pfizer says COVID-19 pill near 90% effective in final analysis
Headlines 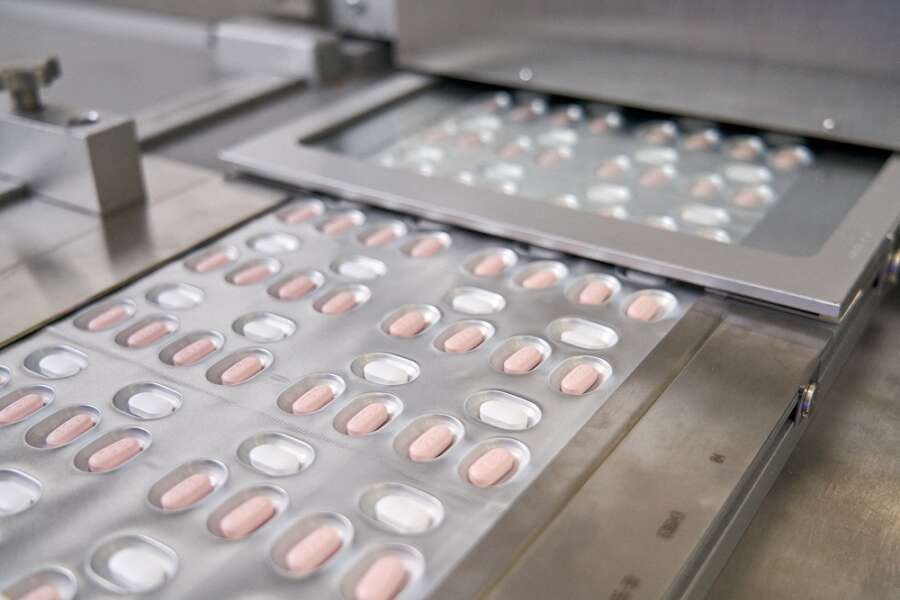 By Michael Erman and Deena Beasley

NEW YORK (Reuters) – Pfizer Inc on Tuesday said final analysis of its antiviral COVID-19 pill still showed near 90% efficacy in preventing hospitalizations and deaths in high-risk patients, and recent lab data suggests the drug retains its effectiveness against the fast spreading Omicron variant of the coronavirus.

The U.S. drugmaker last month said the oral medicine was around 89% effective in preventing hospitalizations or deaths when compared to placebo, based on interim results in around 1,200 people. The data disclosed on Tuesday includes an additional 1,000 people.

Nobody in the trial who received the Pfizer treatment died, compared with 12 deaths among placebo recipients.

The Pfizer pills are taken with the older antiviral ritonavir every 12 hours for five days beginning shortly after onset of symptoms. If authorized, the treatment will be sold as Paxlovid.

“We’re talking about a staggering number of lives saved and hospitalizations prevented. And of course, if you deploy this quickly after infection, we are likely to reduce transmission dramatically,” Dolsten said.

Pfizer also released early data from a second clinical trial suggesting that the treatment reduced hospitalizations by around 70% in a smaller trial of standard-risk adults, including some higher-risk vaccinated people. The results were not statistically significant, but Pfizer said they showed a “positive data trend for reduction in risk.”The trial did not show that the drug alleviated symptoms of COVID-19 in the same population.

The results in standard-risk individuals are from interim analyses at 60% and 80% of enrollment of the now fully-enrolled trial of over 1,100 people. Pfizer will continue the trial and release more data when its done.

Dolsten said he expects authorization for use in high-risk individuals from the U.S. Food and Drug Administration and other regulatory agencies soon. He does not believe an FDA advisory panel meeting will be needed.

Pfizer submitted data to the U.S. FDA last month, asking for emergency use authorization of the drug.

The FDA’s decision could come within a matter of weeks, if not days, said Zarina Saidova, an analyst at Moscow-based Finam Holdings, as the new data confirms what the company previously disclosed and submitted to the regulator.

Saidova expects Paxlovid to generate $15 billion to $20 billion in revenue next year, a significant boost for the company in the face of a potential decline in vaccine sales.

There are currently no oral antiviral treatments for COVID-9 authorized in the United States.

Rival Merck & Co has asked for emergency use authorization of its antiviral pill molnupiravir. But that drug only reduced hospitalizations and deaths in its clinical trial of high-risk patients by around 30%.

Some scientists have also raised safety concerns about the potential for birth defects from the Merck drug, as well as worries that it could cause the virus to mutate.

Pfizer’s drug works differently. It is part of a class of drugs called protease inhibitors currently used to treat HIV, hepatitis C and other viruses.

Dolsten said recent laboratory testing showed that activity against the protease of the Omicron variant is as “good as basically any SARS-COV-2 variant of concern.”

The company has said it can have 180,000 treatment courses ready to ship this year and plans to produce at least 80 million more in 2022.

Dolsten said Pfizer is looking to expand that output further as new variants, like the newly-discovered Omicron, could push the need for antivirals substantially higher. Current vaccines appear to be less effective at preventing infection with Omicron.

Pfizer, which makes one of the leading COVID-19 vaccines with German partner BioNTech, has agreed to allow generic manufacturers to supply versions of the drug to 95 low- and middle-income countries through a licensing agreement with international public health group Medicines Patent Pool (MPP). However, Dolsten said that for next year he expects the drug will be mainly produced by Pfizer.

The U.S. government has already secured 10 million courses of the Pfizer drug for $5.29 billion.