Home Headlines Risk of new wildfires in southwestern France as heatwave persists
Our website publishes news, press releases, opinion and advertorials on various financial organizations, products and services which are commissioned from various Companies, Organizations, PR agencies, Bloggers etc. These commissioned articles are commercial in nature. This is not to be considered as financial advice and should be considered only for information purposes. It does not reflect the views or opinion of our website and is not to be considered an endorsement or a recommendation. We cannot guarantee the accuracy or applicability of any information provided with respect to your individual or personal circumstances. Please seek Professional advice from a qualified professional before making any financial decisions. We link to various third-party websites, affiliate sales networks, and to our advertising partners websites. When you view or click on certain links available on our articles, our partners may compensate us for displaying the content to you or make a purchase or fill a form. This will not incur any additional charges to you. To make things simpler for you to identity or distinguish advertised or sponsored articles or links, you may consider all articles or links hosted on our site as a commercial article placement. We will not be responsible for any loss you may suffer as a result of any omission or inaccuracy on the website.
Headlines

Risk of new wildfires in southwestern France as heatwave persists 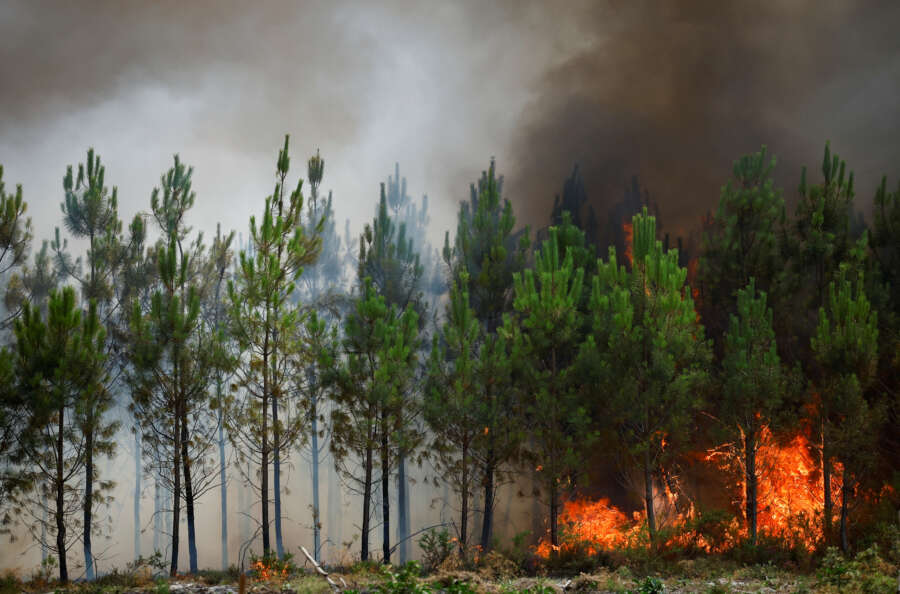 By Stephane Mahe and Manuel Ausloos

SAINT-MAGNE, France (Reuters) – High temperatures and a worsening drought brought a high risk of new fires breaking out in southwestern France, officials said on Friday, even after an overnight reprieve held a monster wildfire that has been raging for days in check.

Firefighters from Germany, Romania and Greece were on the ground to help France battle the fire in the Gironde region – home to Bordeaux wine – as well as on other fronts, including in Brittany in the northwest, and more from across Europe were on their way.

The risk of new fires is “very severe” considering the weather conditions, the Gironde prefecture said.

“The day is likely to be complicated since temperatures continue to increase and humidity continues to drop, so obviously we remain vigilant and mobilised,” senior local official Ronan Leaustic told a news conference.

Temperatures as high as 40 degrees Celsius (104 degrees Fahrenheit) were expected in the southwest, with high temperatures also expected across much of France, France’s official weather forecast Meteo France said.

The heatwave – officially France’s third this summer – was set to ebb on Saturday and end on Sunday with storms, it said.

Wildfires have broken out across Europe this summer as successive heatwaves bake the continent and renew the focus on climate change risks to industry and livelihoods.

A huge wildfire raged throughout the night and into its seventh day on Friday in central Portugal, where more than 1,600 firefighters backed by nine waterbombing aircraft were combating the blaze that has destroyed about 15% of the Serra da Estrela national park.

After starting in the Covilha area on Saturday, the fire has spread to several neighbouring councils, burning around 15,000 hectares (37,000 acres) overall.

Meanwhile, water levels on the river Rhine in Germany have fallen again, with some vessels no longer able to sail, shipping operators and brokers said.

And British households were facing new water usage restrictions, with parts of England likely to declare a drought as the government, environment officials and water companies meet to discuss the prolonged hot and dry weather.

Politicians across the continent are evaluating the impact.

“This fire season this year is far from over,” Pascal Martin, a centrist French senator and former firefighter told Europe 1 radio.

“Now though two lessons have to be learned, which is that the fires are extending both geographically and over time, no longer only in the south, but in the entire country, even in the Jura and in Brittany, and no longer just in the summer months.”