Home Headlines Russia seizes Ukraine nuclear power plant as forces lay siege to cities
Our website publishes news, press releases, opinion and advertorials on various financial organizations, products and services which are commissioned from various Companies, Organizations, PR agencies, Bloggers etc. These commissioned articles are commercial in nature. This is not to be considered as financial advice and should be considered only for information purposes. It does not reflect the views or opinion of our website and is not to be considered an endorsement or a recommendation. We cannot guarantee the accuracy or applicability of any information provided with respect to your individual or personal circumstances. Please seek Professional advice from a qualified professional before making any financial decisions. We link to various third-party websites, affiliate sales networks, and to our advertising partners websites. When you view or click on certain links available on our articles, our partners may compensate us for displaying the content to you or make a purchase or fill a form. This will not incur any additional charges to you. To make things simpler for you to identity or distinguish advertised or sponsored articles or links, you may consider all articles or links hosted on our site as a commercial article placement. We will not be responsible for any loss you may suffer as a result of any omission or inaccuracy on the website.
Headlines 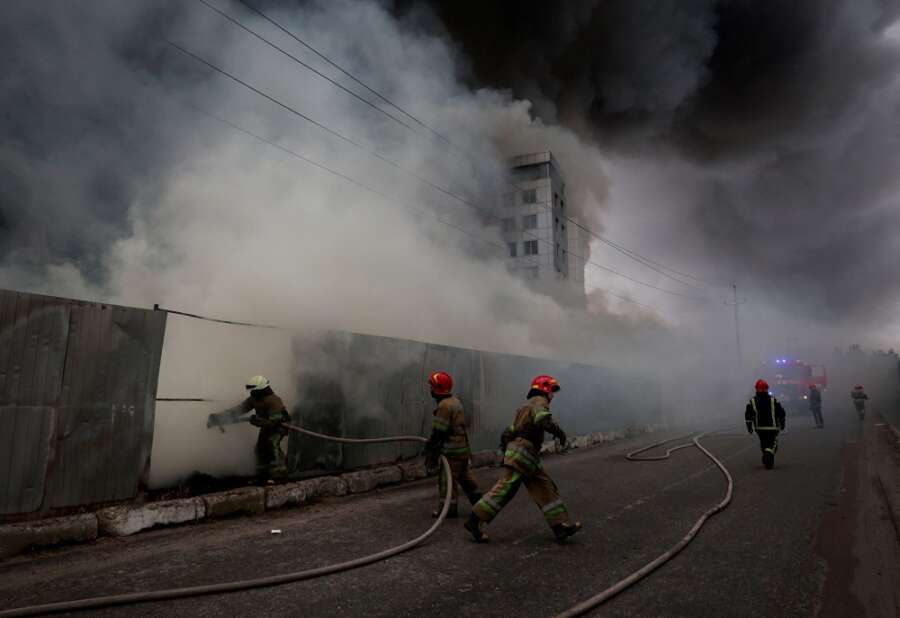 By Pavel Polityuk and Aleksandar Vasovic

LVIV, Ukraine/KYIV (Reuters) -Russian forces in Ukraine seized Europe’s biggest nuclear power plant on Friday in an assault that caused alarm around the world and that Washington said had risked catastrophe, although officials said later that the facility was now safe.

The capital Kyiv, in the path of a Russian armoured column that has been stalled on a road for days, came under renewed attack, with explosions audible from the city centre.

The southeastern port city of Mariupol – a key prize for the Russian troops – has been encircled and shelled. Its mayor said on Friday it had no water, heat or electricity and is running out of food after five days under attack.

“We are simply being destroyed,” Mayor Vadym Boychenko said.

However, NATO allies on Friday rejected Ukraine’s appeal for no-fly zones, saying they were increasing support but that stepping in directly would lead to a broader, even more brutal European war.

Putin’s actions have drawn almost universal worldwide condemnation and Western countries have imposed heavy sanctions in an effort to squeeze the Russian economy.

A humanitarian disaster is also unfolding, with more than one million people seeking refuge in western Ukraine and in neighbouring countries. Thousands of people are believed to have been killed or wounded since the start of the Feb. 24 invasion.

The attack on the Zaporizhzhia nuclear power plant brought the conflict to a perilous moment. As shells hit the area, a blaze broke out in a training building – triggering a spasm of alarm around the world before the fire was extinguished and officials said the facility was safe.

The U.S. Ambassador to the United Nations, Linda Thomas-Greenfield, said the world had narrowly averted a nuclear catastrophe.

The attack reflected a “dangerous new escalation” in Russia’s invasion, she said during an emergency U.N. Security Council meeting, warning that “imminent danger” persisted and demanding assurances from Moscow that such an assault will not happen again.

An official at Energoatom, the Ukrainian state nuclear plant operator, told Reuters fighting had ceased and radiation levels were normal. But his organisation no longer had contact with the plant’s managers or control over its nuclear material, he said.

International Atomic Energy Agency chief Raphael Grossi said the plant was undamaged from what he believed was a Russian projectile. Only one of its six reactors was working, at around 60% of capacity.

Russia’s defence ministry also said the plant was working normally. It blamed the fire on an attack by Ukrainian saboteurs and said its forces were in control.

Germany’s Chancellor Olaf Scholz became the latest Western leader to phone Putin and demand he call off the war. His Foreign Minister Annalena Baerbock said Russia was increasing its strikes on civilians “with the most brutal rigor”.

“We are not part of this conflict,” NATO Secretary-General Jens Stoltenberg told a news conference.

“We have a responsibility as NATO allies to prevent this war from escalating beyond Ukraine because that would be even more dangerous, more devastating and would cause even more human suffering.”

Moscow denies targeting civilians and says its aim is to disarm its neighbour, counter what it views as NATO aggression and capture leaders it calls neo-Nazis. Ukraine and its Western allies call that a baseless pretext for a war to conquer a country of 44 million people.

Irish Foreign Minister Simon Coveney lamented “the images we see of apartment blocks in working class areas outside of cities with half of buildings gone, in smouldering rubble.”

More EU sanctions were coming, potentially including a ban on Russian-flagged ships in European ports and blocking imports of steel, timber, aluminium or coal, he said.

In Kyiv’s Borshchahivka neighbourhood, the twisted engine of a cruise missile lay in the street where it had apparently been downed overnight by Ukrainian air defences.

Russian troops “all should go to hell,” said Igor Leonidovich, 62, an ethnic Russian who moved to Ukraine 50 years ago as a boy. “For the occupiers it is getting worse and worse, every day.”

A Ukrainian presidential adviser said an advance had been halted on the southern port of Mykolayiv after local authorities said Russian troops had entered it. If captured, the city of 500,000 people would be the biggest yet to fall.

Adviser Oleksiy Arestovych said: “We can feel cautious optimism about the future prospects of the enemy offensive – I think that it will be stopped in other areas also.”

Russian forces have made their biggest advances in the south, where they captured their first sizeable Ukrainian city, Kherson, this week. Bombing has worsened in recent days in the northeast cities of Kharkiv and Chernihiv.

Ukrainians have been fleeing west, many crowding into Lviv near the Polish border.

James Elder of the United Nations children’s agency said doctors in Lviv were preparing a system to identify children in case of mass casualties.

“A green dot means fine over here, a yellow dot means critical support. They are learning a black dot means the child won’t make it,” he said.

In Russia, where Putin’s main opponents have largely been jailed or driven into exile, the war has led to a further crackdown on dissent.

Authorities have banned reports that refer to what it terms a “special military operation” as a “war”. Anti-war demonstrations have been squelched with thousands of arrests.

Russia earlier cut access to several foreign news organisations’ websites, including the BBC, Voice of America and Deutsche Welle, for spreading what it said was false information about its war in Ukraine.

Parliament on Friday passed a law imposing a jail term of up to 15 years for spreading intentionally “fake” news about the military. The BBC said it would temporarily suspend the work of all its journalists and support staff in Russia following the introduction of the law.

U.S., allies slam Russia at U.N. over its seizure of Ukraine nuclear plant