Home Headlines Russia unleashes rockets after Mariupol ceasefire, EU eyes oil sanctions
Our website publishes news, press releases, opinion and advertorials on various financial organizations, products and services which are commissioned from various Companies, Organizations, PR agencies, Bloggers etc. These commissioned articles are commercial in nature. This is not to be considered as financial advice and should be considered only for information purposes. It does not reflect the views or opinion of our website and is not to be considered an endorsement or a recommendation. We cannot guarantee the accuracy or applicability of any information provided with respect to your individual or personal circumstances. Please seek Professional advice from a qualified professional before making any financial decisions. We link to various third-party websites, affiliate sales networks, and to our advertising partners websites. When you view or click on certain links available on our articles, our partners may compensate us for displaying the content to you or make a purchase or fill a form. This will not incur any additional charges to you. To make things simpler for you to identity or distinguish advertised or sponsored articles or links, you may consider all articles or links hosted on our site as a commercial article placement. We will not be responsible for any loss you may suffer as a result of any omission or inaccuracy on the website.
Headlines 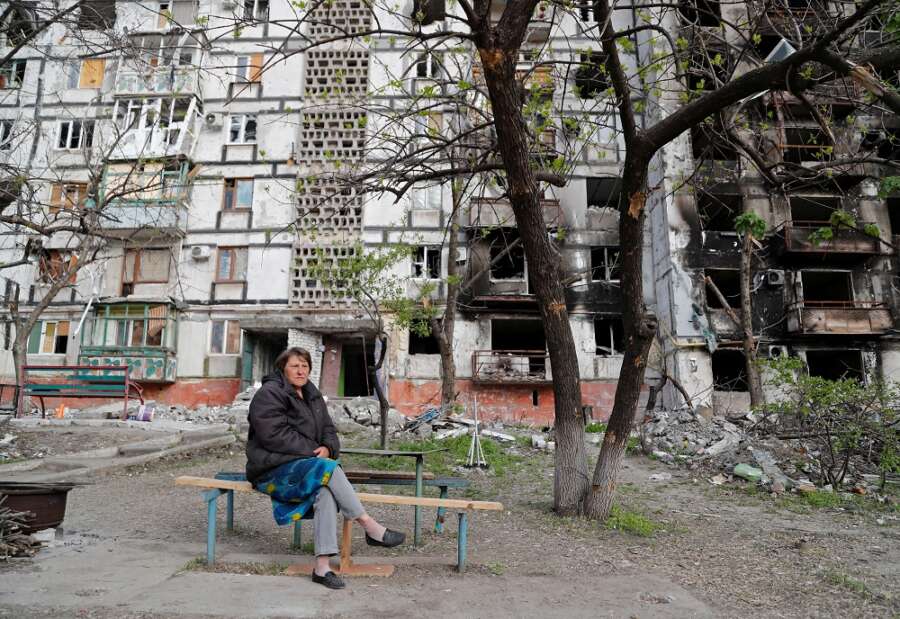 By Joseph Campbell and Tom Balmforth

ZAPORIZHZHIA, Ukraine (Reuters) -Russia launched an assault on the encircled Azovstal steel works in Mariupol, Ukraine’s last redoubt in the port city, after a ceasefire broke down on Tuesday with some 200 civilians trapped underground despite a U.N.-brokered evacuation.

Russia has turned its fire power on Ukraine’s east and south after failing to take the capital of Kyiv in March. The offensive has been met with commitments by Western powers for tougher sanctions as well as supplies of heavier weapons to Ukraine, including air defence systems and long-range artillery.

On Tuesday, the European Commission is expected to finalise a ban on buying Russian oil in an effort to squeeze Moscow’s war chest. The U.S. Congress is considering a $33 billion military aid package, and the United Kingdom this week vowed an additional $375 million in defence assistance.

“This is Ukraine’s finest hour, that will be remembered and recounted for generations to come,” British Prime Minister Boris Johnson said in an address to Ukraine’s parliament via videolink, echoing the words spoken by Churchill in 1940 when Britain faced the threat of being invaded and defeated by Nazi Germany.

Russia’s defence ministry said Ukrainian forces had used a ceasefire to establish new firing positions, and that Russia-backed forces were now “beginning to destroy” those positions.

Further along the Black Sea coast, high-precision missiles struck an airfield near the port of Odesa where drones and ammunition supplied to Ukraine by the United States and European allies were stored, according to Russia’s defence ministry. Ukraine confirmed a rocket strike in Odesa.

The war launched by Russian President Vladimir Putin on Feb. 24 is also heavily focused on the eastern provinces of Donetsk and Luhansk, parts of which were already held by Russian-backed separatists.

Russia’s troops are trying to encircle a large Ukrainian force there, attacking from three directions with massive bombardment along the front.

Pope Francis said in an interview published on Tuesday that he had asked for a meeting in Moscow with Putin to try to stop the war but had not received a response. French President Emmanuel Macron will speak with Putin on Tuesday, Macron’s office said.

German Chancellor Olaf Scholz said Putin’s policies were imperialistic, and that he would support Finland and Sweden if they decided to join NATO.

“No-one can assume that the Russian president and government will not on other occasions break international law with violence,” Scholz said.

Russian bombardments since troops invaded Ukraine on Feb. 24 have flattened cities, killed thousands of civilians and forced more than five million to flee the country.

Russia calls its actions a “special operation” to disarm Ukraine and protect it from fascists.

Ukraine and the West say the fascist allegation is baseless and that the war is an unprovoked act of aggression.

The fighting followed a ceasefire around the complex that allowed several groups of civilians to escape Mariupol’s last holdout of Ukrainian fighters in recent days.

Mariupol mayor Vadym Boychenko said he hoped a first column of evacuees would reach the Ukrainian-controlled city of Zaporizhzhia on Tuesday, adding that more civilians were trapped in bunkers and tunnels under the complex and some 100,000 remained in the rest of the city.

“You wake up in the morning and you cry. You cry in the evening. I don’t know where to go at all,” said Mariupol resident Tatyana Bushlanova, sitting by a blackened apartment block and talking over the sound of shells exploding nearby.

Mariupol is a major target for Russia as it seeks to cut Ukraine off from the sea and connect the Russian-controlled territory in the south and east.

In Brussels, the European Commission is expected to finalise a proposed sixth package of EU sanctions against Russia on Tuesday, including a possible embargo on buying Russian oil. In a major shift, Germany said it was prepared to back an immediate oil embargo.

“This package should include clear steps to block Russia’s revenues from energy resources,” Zelenskiy said in his nightly video address.

EU countries have paid more than 47 billion euros ($47.43 billion) to Russia for gas and oil since it invaded Ukraine, according to research organisation the Centre for Research on Energy and Clean Air.

Ambassadors from EU countries will discuss the proposed sanctions when they meet on Wednesday. Putin responded with a decree to allow retaliatory economic sanctions against “unfriendly” foreign states on Tuesday.

Ukraine’s second biggest city, Kharkiv, was under bombardment, as it has been since the early days of the invasion, the Ukrainian military said on Tuesday.

Giving an update on the battle front, Ukraine’s general staff said its forces were defending the approach to Kharkiv from Izyum, a town on the Donets river, some 120 km (75 miles) to the southeast, as Russian forces left a trail of destruction in Luhansk province.

Some other areas of Donetsk were under constant fire and regional authorities were trying to evacuate civilians from frontline areas, the Ukrainian president’s office said.