Russia’s offer to foreign firms: stay, leave or hand over the keys 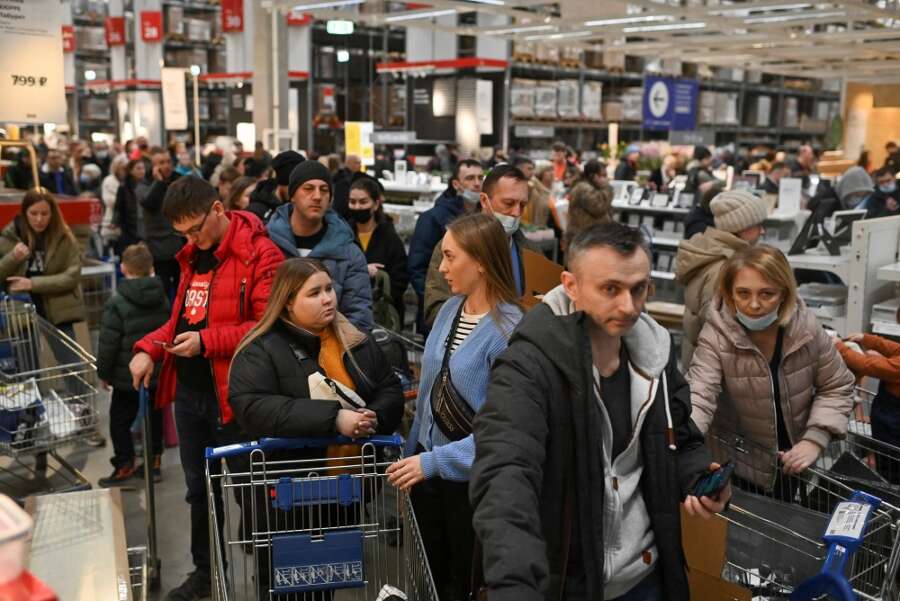 MOSCOW (Reuters) -Companies around the globe grappled with a dilemma over what to do with their Russian investments on Friday as Moscow laid out their options: stay in the country, exit entirely or hand over their holdings to local managers until they return.

First Deputy Prime Minister Andrei Belousov spelt out the government’s position a little more than a week after Russia invaded Ukraine, and a day after French bank Societe Generale sent a chill through the corporate world by saying Russian authorities could seize its assets in the country.

“The company continues to work fully in Russia,” he said in a statement. “Foreign shareholders transfer their share to be managed by Russian partners and can return to the market later,” he added, and: “The company permanently terminates operations in Russia, closes production and dismisses employees.”

No route comes without risks. Those staying could face a backlash in Western markets where the public have rallied to Ukraine’s cause, those transferring shares could be handing over the keys with few guarantees, while those quitting may face a big loss at best, or might have to sell up for a nominal sum.

“It’s a complicated process,” said Darren Woods, chief executive of U.S. energy giant Exxon Mobil which is exiting oil and gas investments that involve partnerships with Russia’s Rosneft and others worth $4 billion.

He added that it would “require careful management and close coordination with our consortium partners.”

Companies have had little time to prepare.

Russia’s invasion – which Moscow calls a “special operation” – prompted the United States and Europe to impose swift and sweeping sanctions, affecting everything from global payments systems to a range of hi-tech products.

Like Exxon, BP and Shell have said they are quitting, while others have held off withdrawing from Russia for now. TotalEnergies said it would stay but not invest more. Others still, such as Japan’s Toyota, suspended their factories production, while IKEA closed its stores but said it would pay its workers for three months.

“Western companies probably haven’t lost so much money so quickly due to geopolitics since the Shah was overthrown in Iran,” said Renaissance Capital chief economist Charlie Robertson, referring to the Islamic revolution more than four decades ago that led to an exodus of Western businesses.

Yet some companies plan to keep going. Italian tyre maker Pirelli said it had set up a “crisis committee” to monitor developments but did not expect to halt production at either of its two Russian plants.

Its rival, Finland’s Nokian Tyres, said last week it was shifting production of some product lines out of Russia.

But there are no easy fixes even for those looking for an exit when there are limited trading counterparties.

British insurer and asset manager Royal London said it planned to sell its Russian assets, which it said only accounted for about 0.1% of its portfolio.

“We can’t trade these things anyway, but as soon as we can, we obviously intend to divest,” Chief Executive Barry O’Dwyer said.

For companies packing up, the Russian first deputy prime minister said a fast-track bankruptcy plan “will support the employment and social well-being of citizens so that bona fide entrepreneurs can ensure the effective functioning of business”.

Many companies, meanwhile, are still trying to count the cost of their exposure to Russia, a figure that for many keeps changing with each new round of sanctions announced by the United States, the European Union and Britain.

So far global companies, banks and investors have announced they have exposure in some form to Russia of more than $110 billion. That number could rise. Data from research firm Morningstar shows exposure from international funds to the tune of $60 billion in stocks and bonds.

Norway’s sovereign wealth fund, the world’s largest, said it had written off the value of its roughly $3 billion in Russian assets.

Meanwhile SocGen, which has a $20 billion exposure to Russia, said on Thursday it had an adequate buffer for an “extreme scenario, in which the group would be stripped of property rights to its banking assets in Russia”.

Dutch bank ING said its exposure to Russia and Ukraine now stood at about 700 million euros ($770 million) in outstanding loans, basing calculations on the latest sanctions, which Western states say may be tightened further.

BASF, the world’s largest chemicals group, said it was halting new business in Russia and Belarus, except for food production for humanitarian causes. It also hinted at the minefield of new rules sanctions have introduced.

“BASF will only conduct business in Russia and Belarus that fulfils existing obligations in accordance with applicable laws, regulations and international rules,” it said.

Swiss food giant Nestle, maker of KitKat bars and Nescafe coffee, said it was halting advertising in Russia, while Swiss watchmaker Swatch Group said it would continue its operations in Russia but would put exports on hold.

Deutsche Bank said it had been stress-testing its operations given it has a big technology centre in Russia but was assured it could run its everyday business globally.

The German lender had opened a new office in Moscow in December, a move it said at the time represented “a significant investment and commitment to the Russian market”.

Central banks opt for shock and awe to...

How will the ECB contain fragmentation risk in...

Back to the land: Lebanese family turns to...

June 13, 2022
Editorial & Advertiser disclosureEditorial & Advertiser disclosureOur website provides you with information, news, press releases, Opinion and advertorials on various financial products and services. This is not to be considered as financial advice and should be considered only for information purposes. We cannot guarantee the accuracy or applicability of any information provided with respect to your individual or personal circumstances. Please seek Professional advice from a qualified professional before making any financial decisions. We link to various third party websites, affiliate sales networks, and may link to our advertising partners websites. Though we are tied up with various advertising and affiliate networks, this does not affect our analysis or opinion. When you view or click on certain links available on our articles, our partners may compensate us for displaying the content to you, or make a purchase or fill a form. This will not incur any additional charges to you. To make things simpler for you to identity or distinguish sponsored articles or links, you may consider all articles or links hosted on our site as a partner endorsed link.