Home Headlines Take Five: Taking in the vistas from Jackson Hole
Our website publishes news, press releases, opinion and advertorials on various financial organizations, products and services which are commissioned from various Companies, Organizations, PR agencies, Bloggers etc. These commissioned articles are commercial in nature. This is not to be considered as financial advice and should be considered only for information purposes. It does not reflect the views or opinion of our website and is not to be considered an endorsement or a recommendation. We cannot guarantee the accuracy or applicability of any information provided with respect to your individual or personal circumstances. Please seek Professional advice from a qualified professional before making any financial decisions. We link to various third-party websites, affiliate sales networks, and to our advertising partners websites. When you view or click on certain links available on our articles, our partners may compensate us for displaying the content to you or make a purchase or fill a form. This will not incur any additional charges to you. To make things simpler for you to identity or distinguish advertised or sponsored articles or links, you may consider all articles or links hosted on our site as a commercial article placement. We will not be responsible for any loss you may suffer as a result of any omission or inaccuracy on the website.
Headlines

Take Five: Taking in the vistas from Jackson Hole 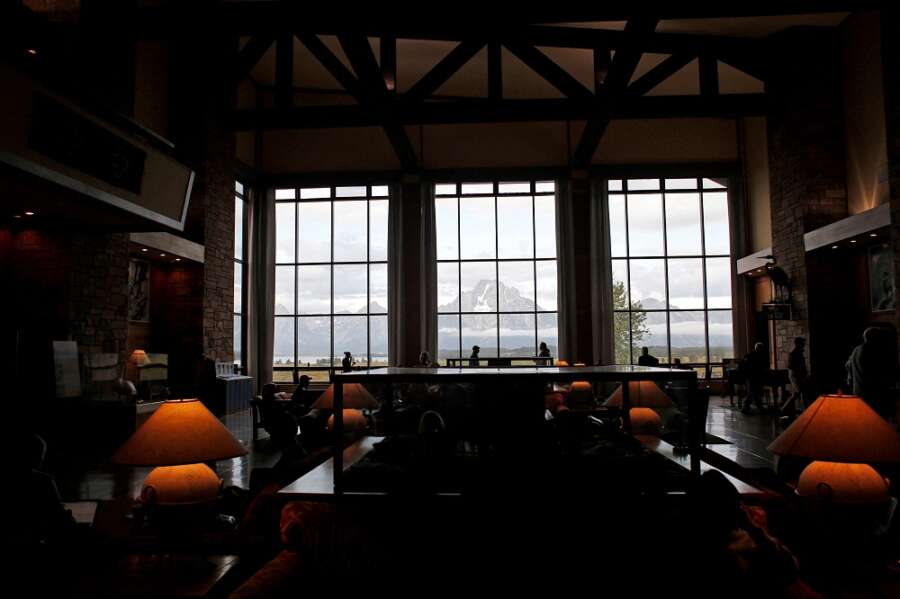 (Reuters) – Jackson Hole, Wyoming, is the focal point for markets in the coming week as investors zero in on the Federal Reserve’s annual confab.

Business activity indicators in the euro zone and an inflation gauge in the United States are also on tap, while rate cuts may be looming in China.

Here is a look at the week ahead from Tommy Wilkes and Marc Jones in London, Kevin Buckland in Tokyo, Ira Iosebashvili and Lewis Krauskopf in New York, Riddhima Talwani in New Delhi, Sumanta Sen in Mumbai and Vineet Sachdev in Bengaluru.

How big will future rate hikes be? How strong is the economy? What about quantitative tightening?

Investors hope the Federal Reserve may shed light on those questions when central banking heavyweights meet on Aug. 25-27 for their annual symposium in Jackson Hole, Wyoming.

U.S. stocks have screamed higher this summer, despite Fed warnings that expectations of a peak in inflation and a so-called dovish pivot from the central bank may be premature.

Some investors believe Chairman Jerome Powell will push back against the market’s optimism again, reminding investors that there is one more inflation report and another jobs number before the Fed’s September meeting.

Also in demand are further details on the Fed’s reduction of its $9 trillion balance sheet, known as quantitative tightening, which some investors have flagged as a potential risk to market liquidity. 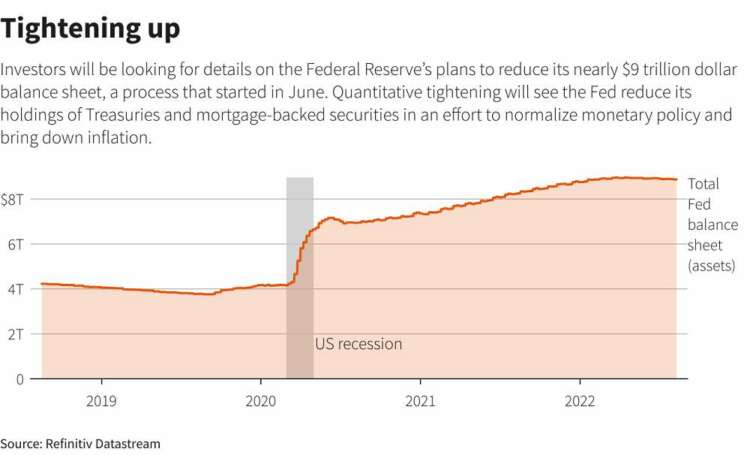 Concerns the euro zone economy is hurtling toward recession are building. Flash purchasing managers index survey data should shed some light on how soon that might happen.

The August numbers, due on Tuesday, may show another month of business activity contraction after S&P Global’s final composite Purchasing Managers’ Index (PMI), seen as a good gauge of economic health, fell to a 17-month low of 49.9 in July.

Tuesday will also include the release of flash PMI numbers for the United States and Britain. 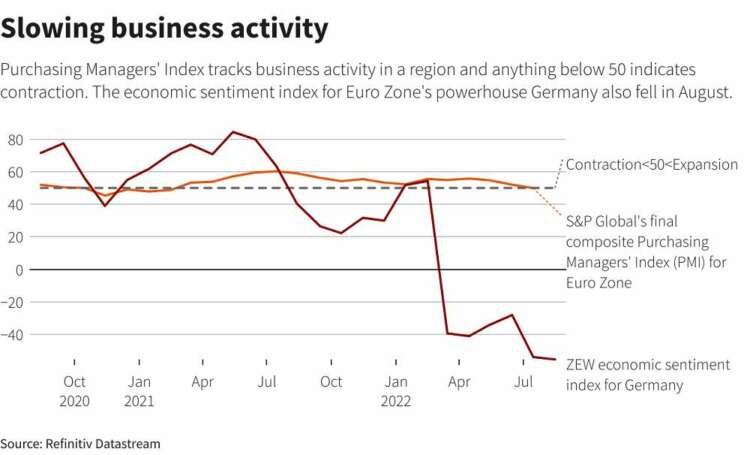 More rate cuts loom in China, but analysts and investors doubt they will give any support to an economy ravaged by a property crisis and strangling COVID-19 lockdowns.

The People’s Bank of China sets the so-called Loan Prime Rate for one-year and five-year borrowing on Monday – the basis for business loans and mortgages, respectively – after recently surprising markets by cutting key bank lending rates.

The move stoked slowdown fears that sent the yuan sliding to a two-month low.

The PBOC is prodding banks to lend more, and pouring money into the financial system. But demand to borrow simply is not there, with corporates fretting about the economic outlook and consumers wary with property prices plunging. 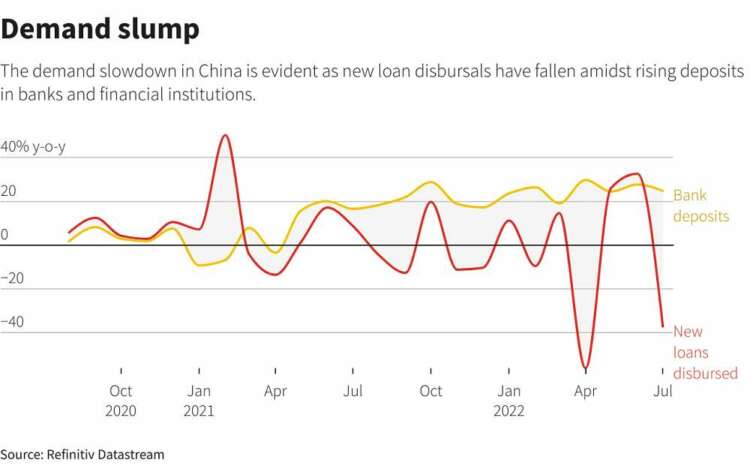 With markets twitching on any inkling that surging inflation has peaked or remains at four-decade highs, the U.S. Federal Reserve’s preferred measure of prices is due on Aug. 26.

The release of the personal consumption expenditures price index for July comes after another key inflation measure, the consumer price index, was flat on a monthly basis in July, the largest month-on-month deceleration of price increases since 1973, a result that heartened stock investors.

In the 12 months through June, the PCE price index advanced 6.8%, the largest increase since January 1982.

With recession fears lingering and investors eager for any clues about the economy’s strength, data on new home sales hits on Tuesday and durable goods on Wednesday. 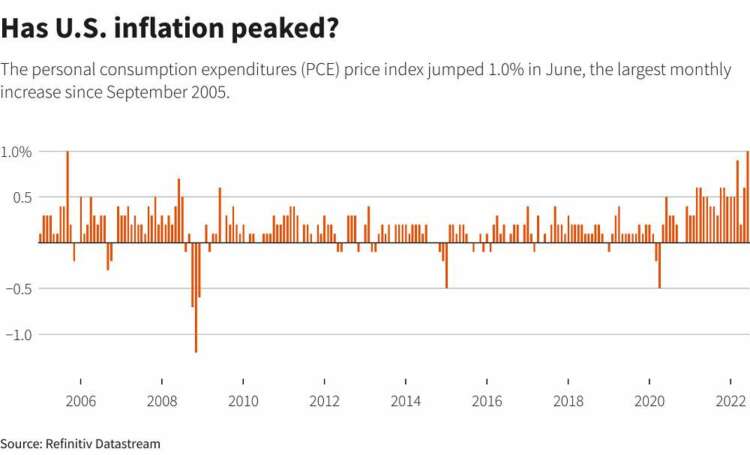 Wednesday marks the six-month anniversary of Russia’s invasion of Ukraine, or special military operation as Moscow called it.

Not only has it been a humanitarian tragedy and plunged the world into a new Cold War, it has also been a key driver of mounting recession worries, especially in Europe where a gas crisis looms large.

The region’s gas prices have nearly tripled since June alone. Rationing in powerhouse economies like Germany may well be needed, but the ECB, Bank of England and others are adamant they simply must crush the inflation it is fuelling.

Other highly sensitive markets have proved remarkably elastic. Wheat and corn – of which Ukraine and Russia are both huge suppliers – have swooped right back down, while Moscow’s main source of income, oil, is now selling for less than when the invasion started. 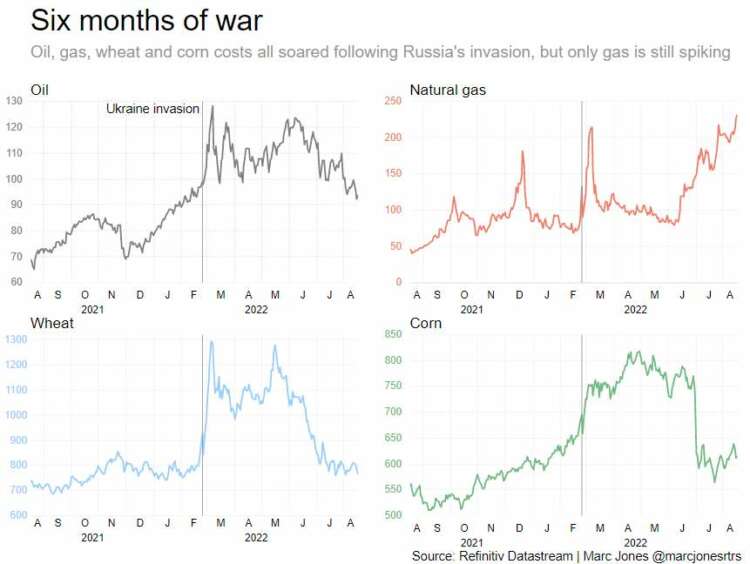