Our website publishes news, press releases, opinion and advertorials on various financial organizations, products and services which are commissioned from various Companies, Organizations, PR agencies, Bloggers etc. These commissioned articles are commercial in nature. This is not to be considered as financial advice and should be considered only for information purposes. It does not reflect the views or opinion of our website and is not to be considered an endorsement or a recommendation. We cannot guarantee the accuracy or applicability of any information provided with respect to your individual or personal circumstances. Please seek Professional advice from a qualified professional before making any financial decisions. We link to various third-party websites, affiliate sales networks, and to our advertising partners websites. When you view or click on certain links available on our articles, our partners may compensate us for displaying the content to you or make a purchase or fill a form. This will not incur any additional charges to you. To make things simpler for you to identity or distinguish advertised or sponsored articles or links, you may consider all articles or links hosted on our site as a commercial article placement. We will not be responsible for any loss you may suffer as a result of any omission or inaccuracy on the website.
Home News U.S. coronavirus cases hit new high, hospitalizations creep up
News 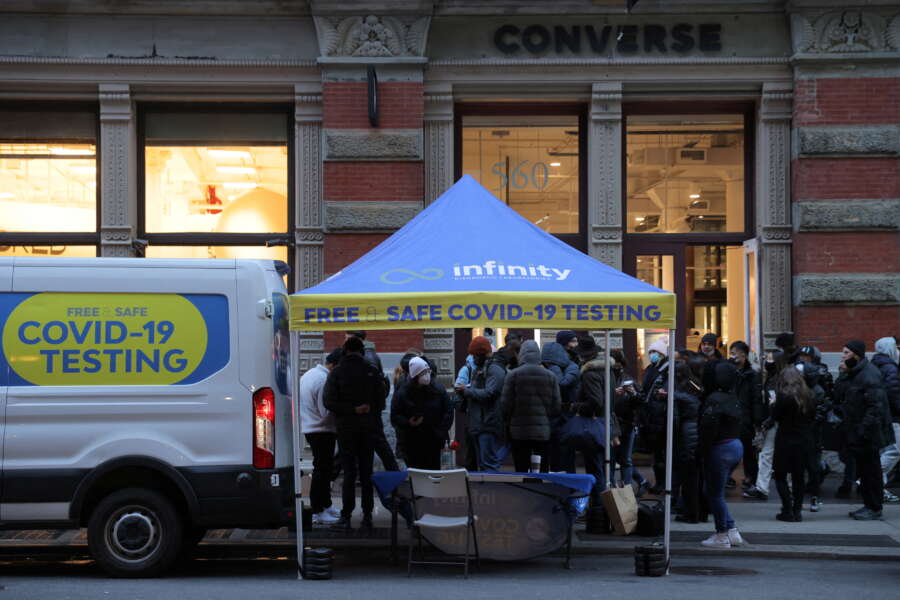 (Reuters) -The average number of daily confirmed coronavirus cases in the United States hit a record high of 258,312 over the past seven days, a Reuters tally showed on Wednesday, as U.S. officials weigh the impact of the more transmissible Omicron variant.

The previous peak for the seven-day moving average was 250,141 confirmed cases recorded on Jan. 8 of this year. Daily records were broken this week in at least seven European nations.

The surge comes as Americans travel over the holidays. Hundreds of flights have been cancelled across the country each day since Christmas as airline staff test positive for the coronavirus. The U.S. Centers for Disease Control and Prevention (CDC) said it was monitoring 86 cruise ships that have reported COVID-19 cases.

While some data from other countries showed less disease with Omicron, it was too early to gauge the impact across the United States, particularly given its uneven vaccination rates, CDC Director Rochelle Walensky said on Wednesday.

Still, she noted in a call with reporters that while the seven-day daily average of positive cases is up 60% over the previous week, the hospitalization rate for the same period is up only 14%, to about 9,000 per day. Deaths were down about 7% to 1,100 per day, she said.

More than 76,000 people are hospitalized with COVID-19 nationwide, up 19% in the past 10 days, according to a Reuters tally.

The CDC released new guidance this week shortening the isolation period for people with a confirmed infection to five days from 10, so long as they are asymptomatic. The move was partly designed to ease staff shortages in hospitals, airlines and other vital services.

Some infectious disease experts, however, have faulted the policy for not distinguishing between vaccinated and unvaccinated people, who recover from the virus at different rates. The new policy also does not require testing to confirm that a person is no longer infectious before they go back to work or socialize.

States showing the highest daily infection numbers on Tuesday included New York, which reported 40,780 cases, and California, which reported over 30,000. Texas reported more than 17,000 cases and Ohio over 15,000.

The Omicron variant was estimated to account for 58.6% of U.S. infections as of Dec. 25, according to CDC data released on Tuesday.