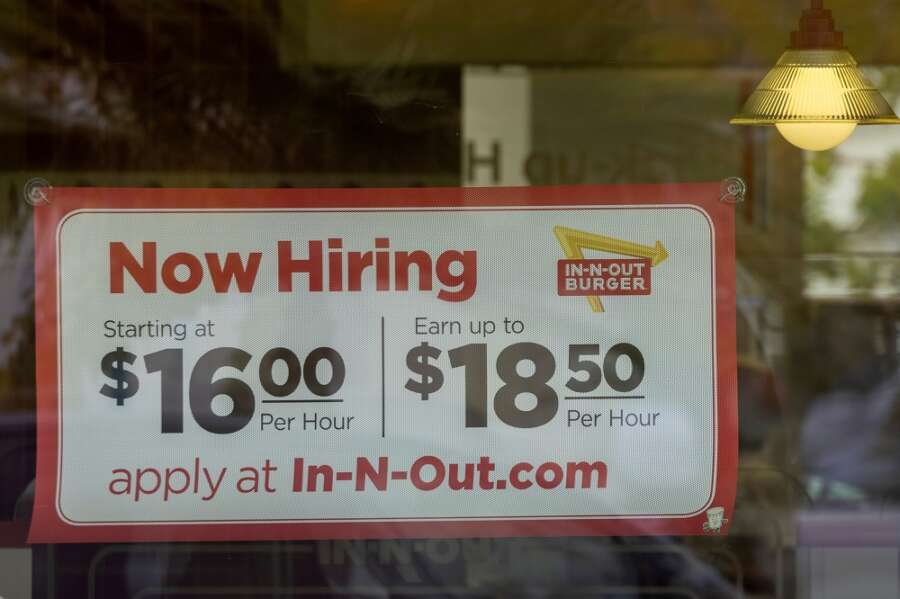 WASHINGTON (Reuters) – The number of Americans filing new claims for jobless benefits fell last week, while layoffs dropped to their lowest level in more than 24 years in August, suggesting the labor market was charging ahead even as new COVID-19 infections surge.

The weekly unemployment claims report from the Labor Department on Thursday, the most timely data on the economy’s health, also showed the number of people on state unemployment rolls tumbling to a 17-month low in the third week of August.

Declining layoffs should help to ease concerns about the economy even if August’s closely watched employment report on Friday shows a slowdown in nonfarm payrolls growth.

“Regardless of tomorrow’s report, keep in mind that the weekly jobless figures say the labor market screws continue to tighten,” said Chris Rupkey, chief economist at FWDBONDS in New York. “There is no sign that the Delta variant is leading to job losses across the country.”

Initial claims for state unemployment benefits dropped 14,000 to a seasonally adjusted 340,000 for the week ended Aug. 28, the lowest level since mid-March 2020 when mandatory closures of nonessential businesses were enforced to slow the first wave of coronavirus cases.

There were notable declines in applications in California, Illinois and Virginia, while Ohio and Missouri reported big increases. Economists polled by Reuters had forecast 345,000 applications for the latest week.

Claims have dropped from a record 6.149 million in early April 2020. They, however, remain above the 200,000-250,000 range viewed as consistent with healthy labor market conditions.

The latest wave of COVID-19 cases, driven by the Delta variant of the coronavirus, and an acute shortage of workers have left some economists expecting moderate job gains in August. Labor market indicators last month were mixed, with a measure of factory employment contracting and private payrolls undershooting expectations. But hiring by small businesses accelerated and consumers’ views of the labor market remained fairly upbeat.

Stocks on Wall Street were trading higher, with the S&P 500 index touching a record high. The dollar slipped against a basket of currencies. U.S. Treasury prices were mixed.

While last week’s claims data has no bearing on August’s employment report as it falls outside the survey period, applications trended lower last month. The claims report showed the number of people continuing to receive benefits after an initial week of aid plunged 160,000 to 2.748 million in the week ended Aug. 21, the lowest level since mid-March 2020.

According to a Reuters survey of economists, nonfarm payrolls likely increased by 750,000 jobs last month after rising by 943,000 in July.

“We expect the jobs report to show that the economy continued to add jobs at a rapid pace in August, defying COVID-19 Delta variant outbreaks across the country,” said Julia Pollak, chief economist at ZipRecruiter.

That optimism was underscored by a separate report on Thursday from global outplacement firm Challenger, Gray & Christmas showing job cuts announced by U.S.-based employers decreased 17% to 15,723 in August, the lowest number since June 1997. So far this year, employers have announced 247,326 job cuts, down 87% compared to the same period last year.

The pandemic has upended labor market dynamics, creating worker shortages even as 8.7 million people are officially unemployed. There were a record 10.1 million job openings at the end of June. Lack of affordable childcare, fears of contracting the coronavirus, generous unemployment benefits funded by the federal government as well as pandemic-related retirements and career changes have been blamed for the disconnect.

The labor crunch is expected to ease starting in September. The government-funded unemployment benefits lapse on Sept. 6 and schools are reopening for in-person learning.

But soaring COVID-19 cases could cause reluctance among some people to return to the labor force. The claims report showed about 12.2 million people were receiving benefits under all programs in mid-August. This number is expected to drop sharply after next Monday’s expiration of government programs, which will affect about 7.5 million people.

About 25 states led by Republican governors terminated the expanded benefits several months ago. Those steps did not lead to an increase in hiring, leaving some economists to caution against expectations for an increase in the labor pool.

“Many states already have ended the programs ahead of the federal expiration but so far we have yet to see clear changes associated with the ends of these programs in many of the different variables we have studied,” said Daniel Silver, an economist at JPMorgan in New York.

The labor market recovery is gaining steam despite a slowdown in economic activity caused by the latest coronavirus wave, fading fiscal stimulus and supply constraints. As a result of the expiration of the expanded benefits, weekly unemployment checks for nearly 3.0 million people will be reduced by $300, which economists say will hurt consumer spending.

But the moderation in growth is likely to be mitigated by a shrinking trade deficit. The trade gap narrowed 4.3% to $70.1 billion in July, the Commerce Department said in a separate report on Thursday.

Economists have sharply marked down their gross domestic product estimates for the third quarter to a low as a 2.9% annualized rate from as high as a 9% pace. The economy grew at a 6.6% rate in the second quarter.

MAJORITY OF UK SECTORS SHOW OUTPUT UP, DESPITE...

The role of tech in meeting changing demands...

July 14, 2022
Editorial & Advertiser disclosureEditorial & Advertiser disclosureOur website provides you with information, news, press releases, Opinion and advertorials on various financial products and services. This is not to be considered as financial advice and should be considered only for information purposes. We cannot guarantee the accuracy or applicability of any information provided with respect to your individual or personal circumstances. Please seek Professional advice from a qualified professional before making any financial decisions. We link to various third party websites, affiliate sales networks, and may link to our advertising partners websites. Though we are tied up with various advertising and affiliate networks, this does not affect our analysis or opinion. When you view or click on certain links available on our articles, our partners may compensate us for displaying the content to you, or make a purchase or fill a form. This will not incur any additional charges to you. To make things simpler for you to identity or distinguish sponsored articles or links, you may consider all articles or links hosted on our site as a partner endorsed link.