Our website publishes news, press releases, opinion and advertorials on various financial organizations, products and services which are commissioned from various Companies, Organizations, PR agencies, Bloggers etc. These commissioned articles are commercial in nature. This is not to be considered as financial advice and should be considered only for information purposes. It does not reflect the views or opinion of our website and is not to be considered an endorsement or a recommendation. We cannot guarantee the accuracy or applicability of any information provided with respect to your individual or personal circumstances. Please seek Professional advice from a qualified professional before making any financial decisions. We link to various third-party websites, affiliate sales networks, and to our advertising partners websites. When you view or click on certain links available on our articles, our partners may compensate us for displaying the content to you or make a purchase or fill a form. This will not incur any additional charges to you. To make things simpler for you to identity or distinguish advertised or sponsored articles or links, you may consider all articles or links hosted on our site as a commercial article placement. We will not be responsible for any loss you may suffer as a result of any omission or inaccuracy on the website.
Home News UK economy almost flat-lined in October, adding to rate hike doubts
News 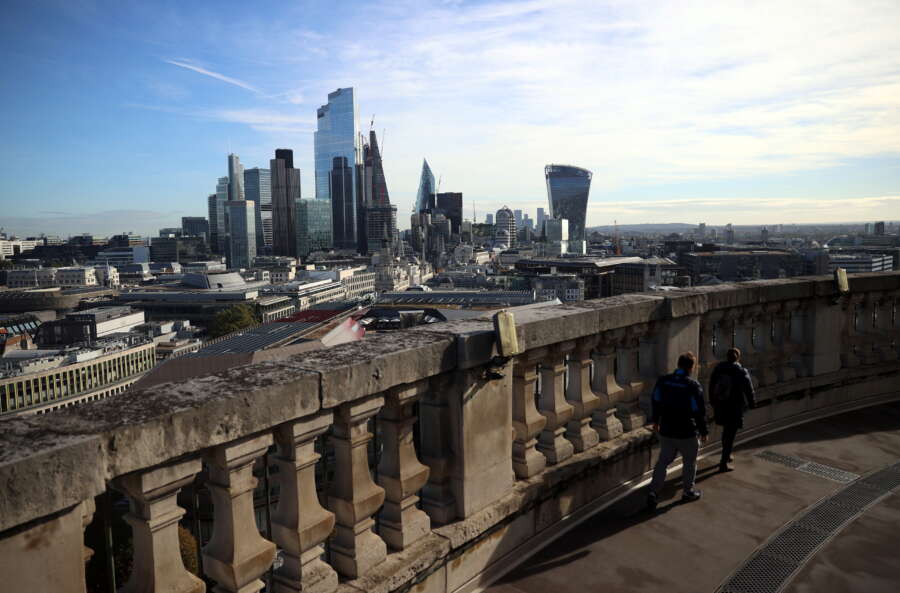 LONDON (Reuters) – Britain’s economy barely grew in October, before the emergence of the new Omicron variant of the coronavirus, further denting expectations that the Bank of England will raise interest rates next week for the first time since the pandemic struck.

Gross domestic product edged up by a weaker-than-expected 0.1% in October.

That meant the economy remained 0.5% smaller than it was in February 2020, just before the country went into its first COVID-19 lockdown, the Office for National Statistics said on Friday.

“Growth disappointed in October, reinforcing concerns about the resilience of the UK’s economic recovery to the Omicron variant and the impact of further restrictions,” Alpesh Paleja, lead economist at the Confederation of British Industry, said.

“We need to create consistency in our approach and build confidence by reducing the oscillation between normal life and restrictions as we learn to live with the virus and its variants.”

Sterling dipped after the ONS figures were published as investors took them as another sign that a BoE rate hike on Dec. 16, after its December meeting, was unlikely.

Britain’s economy bounced back strongly earlier this year from its nearly 10% slump in 2020 when the pandemic hit.

But the rebound slowed in recent months as supply chain problems hit manufacturers and it is expected to lose more momentum due to new COVID-19 rules to slow the spread of the Omicron variant of the coronavirus.

October’s growth was helped by a continued rise in face-to-face appointments at doctors’ surgeries in England which had fallen sharply during the coronavirus pandemic, contributing to a 0.4% rise in output in Britain’s dominant services sector.

By contrast, industrial output fell 0.6%, hit by big falls in electricity and gas and in mining and quarrying.

The manufacturing sector flat-lined as the sector struggled with supply chain problems and staff shortages.

Construction fell by the most since April 2020, down by 1.8% from September, also hit by a shortage of supplies.