Home Headlines Ukrainian women fleeing war find welcome, and work, in Eastern Europe
Our website publishes news, press releases, opinion and advertorials on various financial organizations, products and services which are commissioned from various Companies, Organizations, PR agencies, Bloggers etc. These commissioned articles are commercial in nature. This is not to be considered as financial advice and should be considered only for information purposes. It does not reflect the views or opinion of our website and is not to be considered an endorsement or a recommendation. We cannot guarantee the accuracy or applicability of any information provided with respect to your individual or personal circumstances. Please seek Professional advice from a qualified professional before making any financial decisions. We link to various third-party websites, affiliate sales networks, and to our advertising partners websites. When you view or click on certain links available on our articles, our partners may compensate us for displaying the content to you or make a purchase or fill a form. This will not incur any additional charges to you. To make things simpler for you to identity or distinguish advertised or sponsored articles or links, you may consider all articles or links hosted on our site as a commercial article placement. We will not be responsible for any loss you may suffer as a result of any omission or inaccuracy on the website.
Headlines 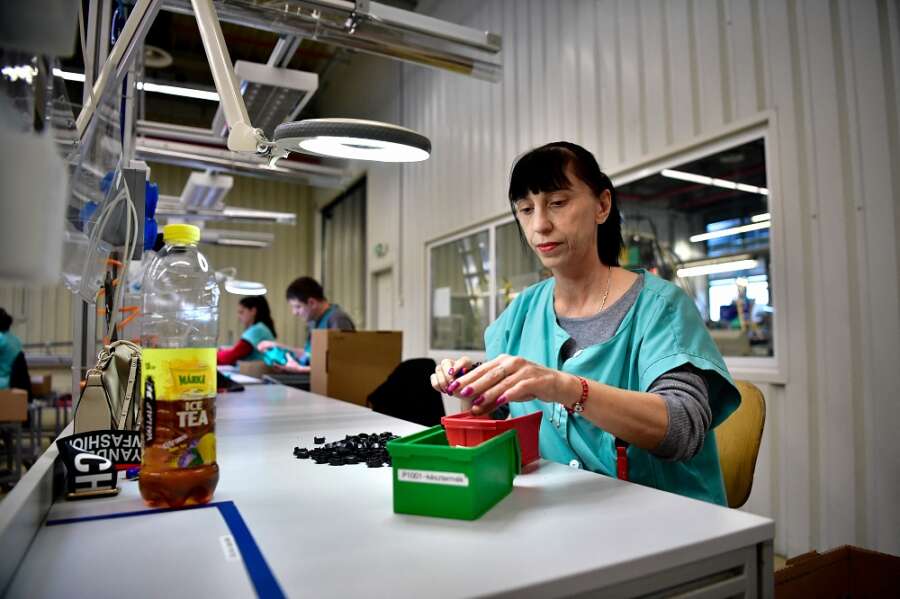 She is one of hundreds of thousands of refugees, mostly women and children, who have poured into Eastern Europe seeking safety since Russia invaded Ukraine on Feb. 24.

The region’s fast-growing economies, which have been struggling with a chronic shortage of workers that pre-dates even the COVID-19 pandemic, are welcoming the refugees with open arms.

Olga fled Hostomel, northwest of Kyiv, three days after the war broke out with her mother, Valentina, her 8-month-old and 11-year-old cousins and their mother, sharing a car with seven other people, with some of the children in the boot.

They arrived in the quaint town of Veszprem on Sunday, where a friend had given them contacts for a temporary work agency that employs 1,200 to 1,300 Ukrainians in western Hungary.

Yasnopolska, who worked for the railways in Ukraine, said the job contract gave her some sense of security.

“It’s a relief that we have somewhere to stay and now I have a job, and we are in safety,” she said, with a tired, faint smile. “I’m not sure I will be able to go back there.”

The three women now live in a flat rented by the temp agency in nearby Varpalota with the two children.

Olga Batozhinska, the mother of the 8-month-old whose husband stayed behind to fight, is still haunted by the memories of spending nights in the shelter in Hostomel, in freezing cold.

“I woke up to feed my baby and heard continuous shelling, the entire house shook,” she said, showing photos on her phone of the shelter and how they had to sleep on the ground at a railway station en route in Ukraine.

She also hopes to find a job soon that will allow her to take care of her baby.

In the wake of the European Union’s 2015 migration crisis some eastern members, led by Poland and Hungary, refused to take in people fleeing war and poverty, saying an influx from Africa and the Middle East would threaten their Christian traditions.

But hundreds of thousands of Ukrainians had been working in Poland, Hungary and the Czech Republic even before the current exodus.

Since last year, companies across the manufacturing, information technology and construction sectors in the region have been jostling to attract employees as their economies rebounded fast from the COVID-19 induced slump.

In Poland, which has been a top destination for Ukrainian workers for years and has received more than 1.3 million refugees since the war began, employers reported 116,500 job vacancies in February.

Work agencies and companies are now hoping to tap into the large pool of refugees, trying to arrange accommodation for Ukrainian workers’ family members and their children.

“This 1 million women with children is in reality about half a million people who can actually enter the workforce and the Polish economy will be able to absorb them easily within a few, three or four months,” said Krzysztof Inglot of the Employers of Poland Association.

Jitka Souckova, marketing director of Grafton Recruitment in Prague, said there were many jobs in manufacturing or logistics, where Ukrainians could work even without speaking Czech.

“Since the beginning of the conflict, we have employed almost 200 women and accommodated their children,” she said.

Gabor Berta, head of the Man at Work temp agency office in Veszprem, through which Yasnopolska found her job, said the biggest problem was finding accommodation for all the Ukrainian workers they have placed and their families.

When the COVID-19 pandemic hit and the economy tanked, many Ukrainian workers lost their jobs and had gone home, he said. Now some firms are cautious, fearing components shortages and soaring energy prices will cause another slowdown.

“This situation is different,” he said. “Here you cannot say to the Ukrainian employee that ‘I am sorry I have too many workers now’, or ‘sorry we need to halt production, please can you go home’. Now, they cannot go home.”

“It was terrible to see the desperation of our women (employees) … they set off rightaway, to bring out their families, as many of them have young children left behind in Ukraine,” said human resources director Barbara Vamosi.

Vamosi said the morning after war broke out, the HR chiefs of companies employing Ukrainians in Veszprem got together trying to find ways to help their Ukrainian employees.

“We are expecting (to hire) a further 20-25 workers primarily from among refugees, but there are also our colleagues who try to bring out their families … we will employ them.”

In the canteen, Ukrainian and Hungarian workers together prepared sandwiches and aid packages on Tuesday, which Vamosi and her colleagues would take to Budapest to the railway station where packed trains arrive daily from the border.

(Writing by Krisztina Than; Additional reporting by Jason Hovet in Prague, Luiza Ilie in Bucharest and Anna Wlodarczak-Semczuk in Warsaw; Editing by Alex Richardson)