Home Headlines Yangtze tributary runs dry as China faces another month of drought
Our website publishes news, press releases, opinion and advertorials on various financial organizations, products and services which are commissioned from various Companies, Organizations, PR agencies, Bloggers etc. These commissioned articles are commercial in nature. This is not to be considered as financial advice and should be considered only for information purposes. It does not reflect the views or opinion of our website and is not to be considered an endorsement or a recommendation. We cannot guarantee the accuracy or applicability of any information provided with respect to your individual or personal circumstances. Please seek Professional advice from a qualified professional before making any financial decisions. We link to various third-party websites, affiliate sales networks, and to our advertising partners websites. When you view or click on certain links available on our articles, our partners may compensate us for displaying the content to you or make a purchase or fill a form. This will not incur any additional charges to you. To make things simpler for you to identity or distinguish advertised or sponsored articles or links, you may consider all articles or links hosted on our site as a commercial article placement. We will not be responsible for any loss you may suffer as a result of any omission or inaccuracy on the website.
Headlines 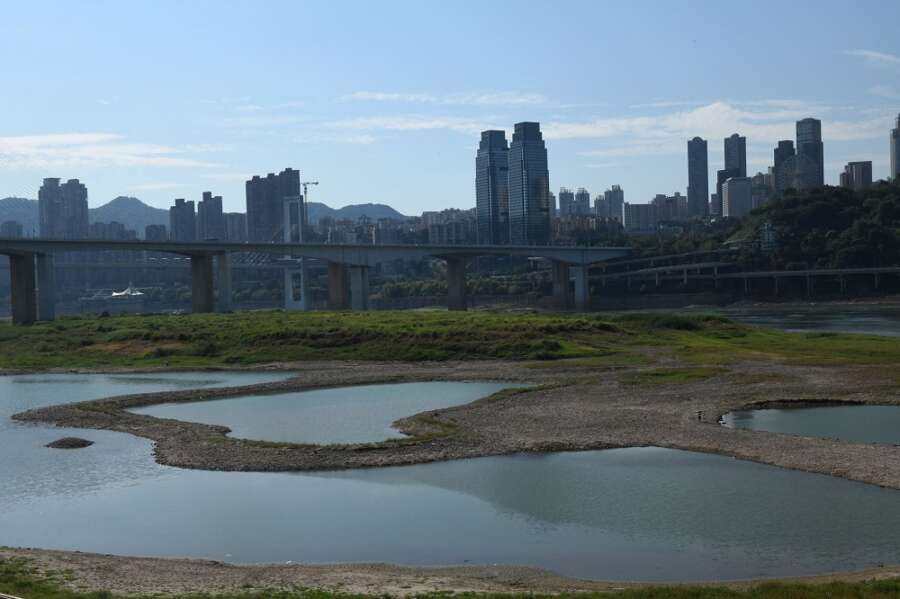 By Thomas Suen and David Stanway

CHONGQING/SHANGHAI (Reuters) -Residents living near a tributary of the Yangtze river in the southwestern region of Chongqing clambered along the dry riverbed on Thursday amid an unprecedented drought across the region that could last another month.

“I am actually pretty worried, because the water has been cut off in my compound,” said Tian Feng, a 27-year old resident exploring the riverbed.

“Originally, I planned to see if I could walk directly from here to the other side of the river,” she said. “Because the water over there is still not dried out yet, I cannot cross.”

Though not completely dried up, dead fish were visible on the exposed flats of the Jialing, a long winding tributary that flows through three provinces before joining the Yangtze in Chongqing. Residents could safely reach a pier of the Qiansimen Bridge overlooking the river.

China warned on Wednesday that the severe dry spell along the Yangtze could last well into September as local governments race to maintain power and find fresh water to irrigate crops ahead of the autumn harvest.

Normal water flows in the region could be months away, with rainfall expected to remain low until the end of this month and beyond, said Liu Zhiyu, an official at the Ministry of Water Resources, speaking at a briefing on Wednesday.

“It is expected that in September, water inflows in the middle and lower reaches of the Yangtze will still be low, and the drought in Anhui, Hubei, Hunan and Jiangxi could develop further,” Liu said, referring to four major provinces on the middle reaches of the river.

The severe heatwave across the Yangtze basin, caused by a larger-than-usual Western Pacific subtropical high, has lasted more than two months, reducing hydropower supplies and parching large expanses of arable land. The river supports about a third of the country’s population.

Beijing has warned of the increasing risk of extreme weather in China as a result of climate change, and heavy rainfall continues to take its toll in other parts of the country.

Flooding https://www.reuters.com/world/china/flooding-caused-by-heavy-rain-kills-16-western-china-2022-08-18 in the western Chinese province of Qinghai killed 16 people, state media reported on Thursday, with an additional 36 missing.

The Ministry of Finance said on Thursday that it would make 420 million yuan ($61.83 million) of emergency funds available to help local governments provide flood and drought relief.

Chongqing, where most of the Yangtze’s Three Gorges reservoir is located, is trying to secure power from other parts of the country as supplies to industry are rationed, state media reported.

China’s State Grid also promised to do its utmost to dispatch power to the neighbouring Sichuan province, which normally supplies large amounts of surplus hydroelectricity to the east, but is now imposing strict consumption controls.

Companies https://www.reuters.com/article/china-power-sichuan-boe-idAFL1N2ZT01Y with operations in Sichuan, including CATL, the world’s largest battery maker, and Japan’s Toyota, have suspended production in the province as a result of the restrictions, media reports say.

Rainfall in the Yangtze basin has been around 45% lower than normal since July, and high temperatures are likely to persist for at least another week, official forecasts said.

Authorities in the region also said temperatures would continue to exceed 40 degrees Celsius (104 Fahrenheit) on Thursday, with parts of Chongqing set to go beyond 44 degrees.

Controlling water resources is seen as a crucial part of government in China as it tries to guarantee food supplies and secure another bumper harvest.

Rice and other autumn crops are at a “critical period” when it comes to irrigation, Liu Weiping, Vice-Minister of Water Resources, told the Wednesday briefing.

Water levels on the main trunk of the Yangtze and the flood basin lakes of Dongting and Poyang are now at least 4.85 metres (16 feet) shallower than normal, and the lowest on record for the period, officials said.

The Yangtze’s maritime safety bureau has issued several warnings about low water levels, ordering vessels to reduce their load when passing through shallower parts of the river.

The drought has also highlighted the role played by the cascade of giant hydropower projects in regulating flows on the Yangtze.

Giant upstream reservoirs are opening their gates to replenish storage levels at the Three Gorges Dam, which will release 830 million cubic metres downstream over the coming days.