Home Headlines Zelenskiy calls on German chancellor to visit Ukraine on May 9
Our website publishes news, press releases, opinion and advertorials on various financial organizations, products and services which are commissioned from various Companies, Organizations, PR agencies, Bloggers etc. These commissioned articles are commercial in nature. This is not to be considered as financial advice and should be considered only for information purposes. It does not reflect the views or opinion of our website and is not to be considered an endorsement or a recommendation. We cannot guarantee the accuracy or applicability of any information provided with respect to your individual or personal circumstances. Please seek Professional advice from a qualified professional before making any financial decisions. We link to various third-party websites, affiliate sales networks, and to our advertising partners websites. When you view or click on certain links available on our articles, our partners may compensate us for displaying the content to you or make a purchase or fill a form. This will not incur any additional charges to you. To make things simpler for you to identity or distinguish advertised or sponsored articles or links, you may consider all articles or links hosted on our site as a commercial article placement. We will not be responsible for any loss you may suffer as a result of any omission or inaccuracy on the website.
Headlines

Zelenskiy calls on German chancellor to visit Ukraine on May 9 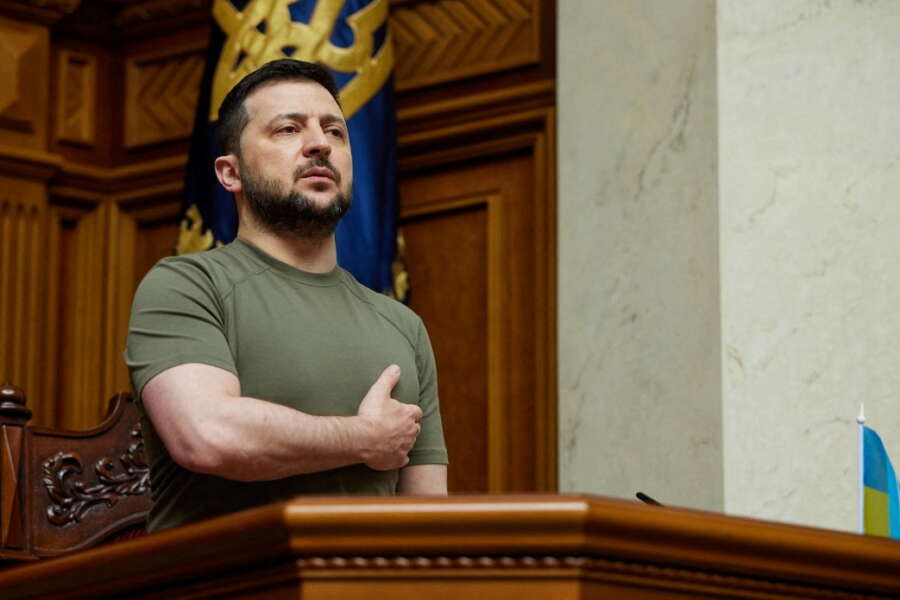 Speaking via a translator to Britain’s Chatham House think tank, Zelenskiy launched a broadside at Russia, particularly over Mariupol, where Kyiv says there are still civilians hiding in a ruined steel plant which is under siege.

But he also offered the invitation to Scholz after the two countries’ relations were strained when the German president was stopped from visiting Kyiv last month.

“He’s invited, the invitation is open, it has been for some time now,” Zelenskiy said on a video call.

“He’s invited to come to Ukraine, he can make this very powerful political step to come here on the 9th of May, to Kyiv. I am not explaining the significance, I think you’re cultured enough to understand why.”

The May 9 Victory Day is one of Russia’s most important national events – a remembrance of the Soviet sacrifice made in defeating Nazi Germany in what is known in Russia as the Great Patriotic War.

On Mariupol, a strategic southern port on the Azov Sea, Zelenskiy said the situation there amounted to “torture” and that no talks could happen with Russia if those civilians or troops were killed when they could have been released.

Mariupol has endured the most destructive siege of the 10-week-old war, and the sprawling Soviet-era Azovstal steel plant is the last part of the city still in the hands of holdout Ukrainian fighters.

“(The Russians) do not believe that they can be made responsible for the war crimes because they have the power of the nuclear state,” Zelenskiy said.

“This is the 72nd day of the fully-fledged war and we can see no end of it yet and we cannot feel any willingness of the Russian side to end it.”