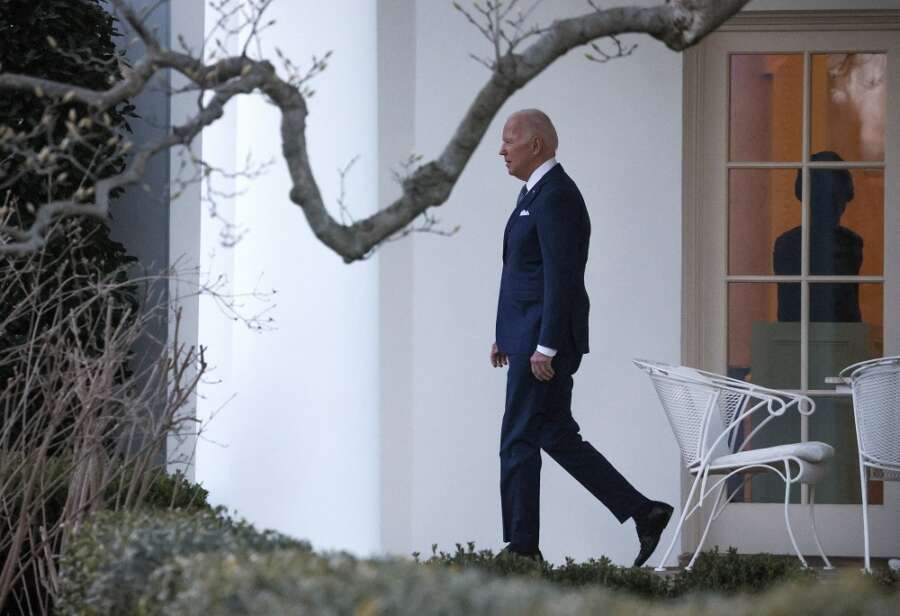 By Trevor Hunnicutt and Steve Holland

WASHINGTON (Reuters) -U.S. President Joe Biden announced a ban on Russian oil and other energy imports on Tuesday in retaliation for the invasion of Ukraine, underscoring strong bipartisan support for a move that he acknowledged would drive up U.S. energy prices.

“We’re banning all imports of Russian oil and gas energy,” Biden told reporters at the White House. “That means Russian oil will no longer be acceptable in U.S. ports and the American people will deal another powerful blow to (Russian President Vladimir) Putin’s war machine.”

Biden has been working with allies in Europe, who are far more dependent on Russian oil, to isolate Russia’s energy-heavy economy and Putin. Britain announced shortly before Biden’s remarks that it would phase out the import of Russian oil and gas by the end of 2022.

Biden said sanctions imposed by the United States and its allies had already caused the Russian economy to “crater”. He said the latest moves had been made in close consultation with allies and partners around the world.

The United States imported more than 20.4 million barrels of crude and refined products a month on average from Russia in 2021, about 8% of U.S. liquid fuel imports, according to the Energy Information Administration, and the ban is expected to send already high gasoline prices and inflation soaring. The United States also imports a negligible amount of coal from Russia.

Biden predicted prices would rise further as a result of “Putin’s war,” but pledged to do all he could to minimize the impact on the American people. He also warned U.S. gas companies against exploiting the situation to engage in profiteering or price gouging.

U.S. Senator Chris Coons said the administration was coordinating with European allies “and making sure that we’ve done the groundwork to understand how to effectively implement a ban on Russian energy.”

“We are going to see increased gas prices here in the United States. In Europe, they will see dramatic increases in prices. That’s the cost of standing up for freedom and standing alongside the Ukrainian people, but it’s going to cost us,” Coons told CNN.

The White House had been coordinating with U.S. congressional leaders working on fast-tracking bipartisan legislation to ban Russian imports, but the ban of Russian imports would make any such bill moot.

Republican lawmakers took to social media to welcome the decision, while criticizing Biden’s green energy policies, and calling for the administration to support more oil and gas production at home.

In announcing that it is phasing out imports of Russian oil and oil products by the end of 2022, Britain said it is giving the market and businesses more than enough time to find alternatives to the imports, which make up 8% of demand.

“The government will also work with companies through a new Taskforce on Oil to support them to make use of this period in finding alternative supplies,” British Business and Energy Secretary Kwasi Kwarteng said.

Five ways a tech business can champion women in the workplace

Russian missiles rain down on Ukraine as West...

NATO deal with Turkey greeted with caution and...

June 22, 2022
Editorial & Advertiser disclosureEditorial & Advertiser disclosureOur website provides you with information, news, press releases, Opinion and advertorials on various financial products and services. This is not to be considered as financial advice and should be considered only for information purposes. We cannot guarantee the accuracy or applicability of any information provided with respect to your individual or personal circumstances. Please seek Professional advice from a qualified professional before making any financial decisions. We link to various third party websites, affiliate sales networks, and may link to our advertising partners websites. Though we are tied up with various advertising and affiliate networks, this does not affect our analysis or opinion. When you view or click on certain links available on our articles, our partners may compensate us for displaying the content to you, or make a purchase or fill a form. This will not incur any additional charges to you. To make things simpler for you to identity or distinguish sponsored articles or links, you may consider all articles or links hosted on our site as a partner endorsed link.