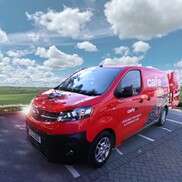 The UK’s fifth largest coffee brand will be upgrading its fleet of almost 100 vehicles to electric over the next five years, saving approximately 12,672g of CO2 per annum. The company’s first electric vehicles will take to the road later this month as part of its annual Green Coffee Fortnight, which runs from September 27th and aims to increase environmentally friendly practices in the coffee industry.

Cafe2U is making the switch as part of its goal to become the UK’s first carbon neutral coffee company. The move means all the company’s diesel vehicles will be off the fleet well ahead of the Government’s ban on petrol and diesel vehicles, which comes into effect in 2030.

To coincide with the unveiling of its first electric van and reduce its carbon footprint further still, the company is also launching a compostable paper cup and minimising its paper usage, with Cafe2U’s head office in the process of digitising all its files ahead of a 2022 deadline to be completely paper-free. The company has also switched from print to digital advertising and launched a new app to replace its loyalty card system.

Cafe2U has introduced several other sustainability initiatives in recent years, with the company launching a waste coffee grounds recycling scheme and replacing its plastic straws with paper alternatives in 2018. This is in addition to replacing the diesel generators in its vans with emission-free lithium-ion batteries in 2019.

Martyn Ward, Chief Executive at Cafe2U, said: “Reducing our carbon footprint is absolutely vital to us and our customers so we’re always on the lookout for new ways to become even more sustainable. We are delighted to be leading the way in the mobile coffee market with our new zero emissions coffee vans which are a world first.

“As well as being better for the environment, electric vehicles will enable our franchisees to access indoor events and emission-free zones, amplifying our pro-sustainability message even further. To be the world’s first is testament to the progressive nature of our brand and the hard work both our head office and franchisees put in each and every day.”