Home Headlines EU’s Michel tells Ukrainians during Kyiv visit: ‘History will not forget’
Our website publishes news, press releases, opinion and advertorials on various financial organizations, products and services which are commissioned from various Companies, Organizations, PR agencies, Bloggers etc. These commissioned articles are commercial in nature. This is not to be considered as financial advice and should be considered only for information purposes. It does not reflect the views or opinion of our website and is not to be considered an endorsement or a recommendation. We cannot guarantee the accuracy or applicability of any information provided with respect to your individual or personal circumstances. Please seek Professional advice from a qualified professional before making any financial decisions. We link to various third-party websites, affiliate sales networks, and to our advertising partners websites. When you view or click on certain links available on our articles, our partners may compensate us for displaying the content to you or make a purchase or fill a form. This will not incur any additional charges to you. To make things simpler for you to identity or distinguish advertised or sponsored articles or links, you may consider all articles or links hosted on our site as a commercial article placement. We will not be responsible for any loss you may suffer as a result of any omission or inaccuracy on the website.
Headlines 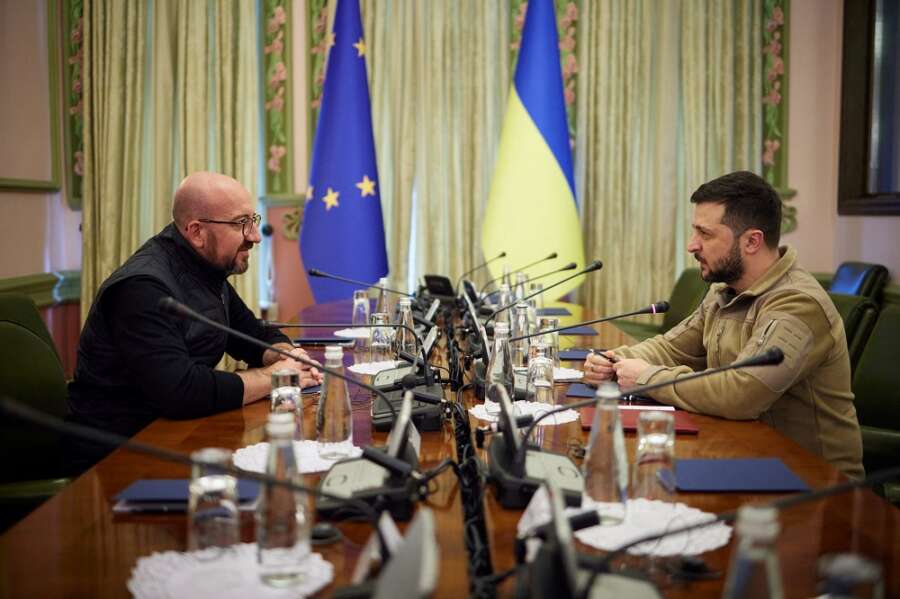 Michel, the head of the European Council, which represents the European Union’s 27 member states, visited the town of Borodianka northwest of Kyiv before holding talks with President Volodymyr Zelenskiy in the capital.

Ukraine suspects that Russian troops carried out atrocities in Borodianka and Bucha, another town near the capital. Moscow denies targeting civilians and has described the allegations as fabricated by Kyiv to justify more sanctions against it.

“There are no words … to explain what I feel. These are atrocities, these are war crimes. It must be punished. It will be punished,” Michel told a joint news conference with Zelenskiy in Kyiv.

He said separately on Twitter: “History will not forget the war crimes that have been committed here. … There can be no peace without justice.”

“You are not alone,” Michel said, praising the courage of the Ukrainian people. “We are with you and will do everything which is possible to support you and to make sure that Ukraine will win the war.”

Michel said the EU had already provided Ukraine with 1.5 billion euros ($1.63 billion) of military equipment as well as imposing sanctions on Russia, but would look for more ways to respond to Russia’s Feb. 24 invasion.

“I am convinced … that sooner or later we will target oil and gas,” he said, without giving details.

EU states have been divided over whether to impose an embargo on Russian oil or gas, with Germany among countries that are heavily dependent on energy imports from Russia.

Zelenskiy welcomed the “political signal” Michel had sent by visiting Borodianka, but urged Brussels to strengthen sanctions pressure on Russia and called for a “complete energy embargo including imports of oil and gas.”

He welcomed a sixth package of sanctions being prepared by the EU, but added: “Oil should be part of the sixth package. Without it this package will be empty, will not be powerful enough.”

Zelenskiy said he and Michel had also discussed answers that Ukraine has provided to a questionnaire on compliance with EU criteria which is considered a starting point for Ukraine in its drive for EU membership.