Home Headlines Exclusive-Germany, Qatar at odds over terms in talks on LNG supply deal -sources
Our website publishes news, press releases, opinion and advertorials on various financial organizations, products and services which are commissioned from various Companies, Organizations, PR agencies, Bloggers etc. These commissioned articles are commercial in nature. This is not to be considered as financial advice and should be considered only for information purposes. It does not reflect the views or opinion of our website and is not to be considered an endorsement or a recommendation. We cannot guarantee the accuracy or applicability of any information provided with respect to your individual or personal circumstances. Please seek Professional advice from a qualified professional before making any financial decisions. We link to various third-party websites, affiliate sales networks, and to our advertising partners websites. When you view or click on certain links available on our articles, our partners may compensate us for displaying the content to you or make a purchase or fill a form. This will not incur any additional charges to you. To make things simpler for you to identity or distinguish advertised or sponsored articles or links, you may consider all articles or links hosted on our site as a commercial article placement. We will not be responsible for any loss you may suffer as a result of any omission or inaccuracy on the website.
Headlines

Exclusive-Germany, Qatar at odds over terms in talks on LNG supply deal -sources 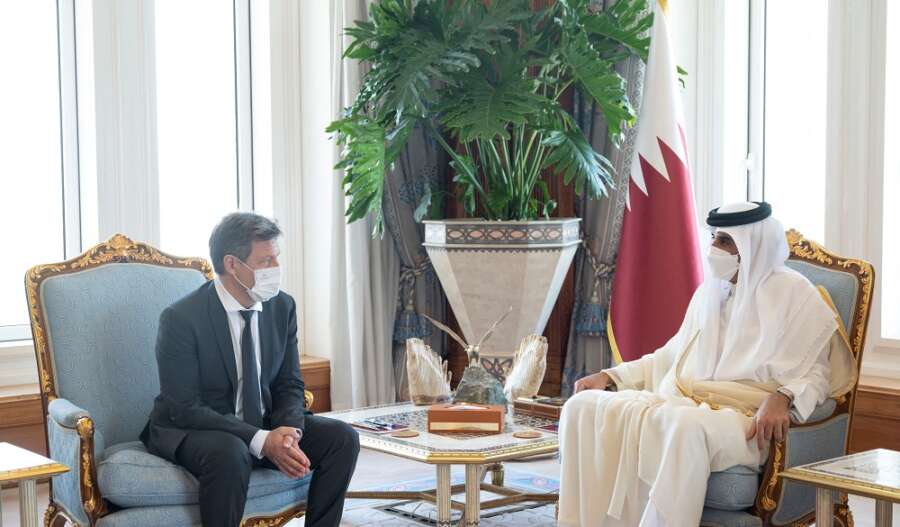 LONDON (Reuters) – Germany and Qatar have hit difficulties in talks over long-term liquefied natural gas (LNG) supply deals amid differences over key conditions, including the duration of any contract, three people familiar with the discussions told Reuters.

Germany, which aims to cut its carbon emissions by 88% by 2040, is reluctant to commit to Qatar’s conditions to sign deals of at least 20 years to secure the massive LNG volumes it needs to reduce its dependence on Russian gas, the people said.

Qatar, the world’s largest LNG supplier, is also specifying terms such as a destination clause that would prevent Berlin from rerouting the gas to other areas in Europe, a condition which the European Union opposes.

The tough talks between Qatar Energy and German utilities highlight the challenges the EU faces in its ambition to diversify away from Russian gas as the German government struggles to balance any deal with its carbon reduction targets.

Germany consumes around 100 billion cubic meters (bcm) of natural gas annually, with around 55% of that coming from Russia and smaller volumes piped from Netherlands and Norway.

It has backed the construction of two LNG terminals and has rented four floating storage and regasification units (FSRUs) as a stop-gap measure.

What it needs now is the actual LNG.

“The issue of LNG contract length potentially putting Germany’s decarbonisation targets at risk is part of the ongoing discussions with Qatar,” one of the people said, adding Germany was also competing with other nations for LNG from Qatar.

Another source said that securing LNG supplies form Qatar “is not expected to happen soon”.

Qatar is also firm on oil-indexation, linking the contracts to oil price, which represents the pricing structure of their alternative sales into Asia, while the Germans are seeking linkage to the Dutch TTF benchmark, Felix Booth, head of LNG at energy intelligence firm Vortexa, said.

“Qatar is in the driving seat in these discussions, with a new project underway, strong interest in their volumes and a long history as a reliable supplier,” Booth said.

“To secure this supply, it is expected that the German team will need to accept a traditional oil linked pricing structure. Leaving the European buyer with significant financial exposure compared to the European hub prices,” he added.

German Economy Minister Robert Habeck in March visited Qatar, along with officials from German utilities RWE and Uniper, to discuss procuring additional volumes but no deal has been agreed so far.

RWE, Germany’s largest power producer, in 2016 struck a deal with Qatargas, a unit of Qatar Energy, under which up to 1.1 million tonnes of liquefied natural gas will be delivered to Northwestern Europe annually by the end of 2023.

German gas companies will be back to Qatar in May to resume talks, two separate people familiar with the process said.

They said that Emir of Qatar, Sheikh Tamim bin Hamad Al Thani, will visit Germany in the second half of May to sign a partnership agreement between the two countries.

However, this does not mean that long-term LNG deals will be concluded, as the partnership is aimed at paving the way to significantly ramp up long term Qatari LNG deliveries to Germany, they added.

Qatar’s sovereign wealth fund, the QIA, has around $20 billion invested in Germany, with stakes in Volkswagen and Deutsche Bank.

Germany hopes for a possible two-way partnership with Qatar where German companies such as Siemens Energy and others could help Doha with its attempts to put into action a sustainability plan it launched late last year.

“There needs to be a gentlemen’s agreement between the Qataris and German companies, that LNG should only be the first step in a longer collaboration between the two countries,” said one of the people, a German industry source.

(Reporting by Marwa Rashad in London, Andrew Mills in Doha and Christoph Steitz in Frankfurt; Additional reporting by Markus Wacket in Berlin; Editing by Veronica Brown and Alexander Smith)