Home Headlines Putin’s Victory Day speech leaves no clue on future escalation
Our website publishes news, press releases, opinion and advertorials on various financial organizations, products and services which are commissioned from various Companies, Organizations, PR agencies, Bloggers etc. These commissioned articles are commercial in nature. This is not to be considered as financial advice and should be considered only for information purposes. It does not reflect the views or opinion of our website and is not to be considered an endorsement or a recommendation. We cannot guarantee the accuracy or applicability of any information provided with respect to your individual or personal circumstances. Please seek Professional advice from a qualified professional before making any financial decisions. We link to various third-party websites, affiliate sales networks, and to our advertising partners websites. When you view or click on certain links available on our articles, our partners may compensate us for displaying the content to you or make a purchase or fill a form. This will not incur any additional charges to you. To make things simpler for you to identity or distinguish advertised or sponsored articles or links, you may consider all articles or links hosted on our site as a commercial article placement. We will not be responsible for any loss you may suffer as a result of any omission or inaccuracy on the website.
Headlines 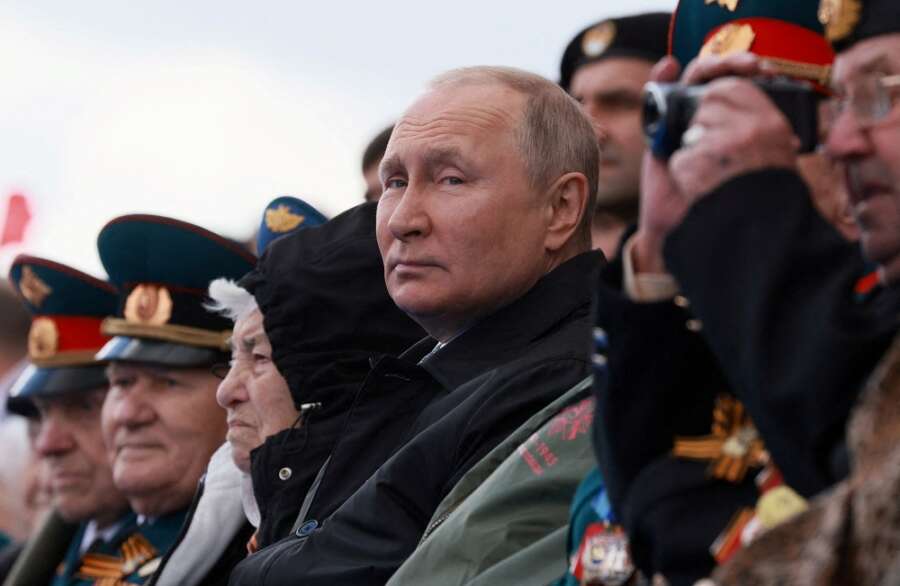 By Pavel Polityuk and Jonathan Landay

KYIV/KHARKIV, Ukraine (Reuters) -Vladimir Putin exhorted Russians to battle in a defiant Victory Day speech on Monday, but was silent about plans for any escalation in Ukraine, despite Western warnings he might use his Red Square address to order a national mobilisation.

In Ukraine, there was no let-up in fighting, with Kyiv describing a stepped-up Russian offensive in the east and a renewed push to defeat the last Ukrainian troops holding out in a steelworks in ruined Mariupol.

Monday’s annual parade in Moscow – with the usual ballistic missiles and tanks rumbling across the cobblestones – was easily the most closely watched since the 1945 defeat of the Nazis that it celebrates.

Western capitals had openly speculated for weeks that Putin was driving his forces to achieve enough progress by the symbolic date to declare victory – but with few gains made so far, might instead announce a national call-up for war.

In the end, he did neither, but repeated his assertions that Russian forces in Ukraine were again fighting Nazis.

“You are fighting for the Motherland, for its future, so that no one forgets the lessons of World War Two. So that there is no place in the world for executioners, castigators and Nazis,” Putin said from the tribune outside the Kremlin walls.

Ukraine’s President Volodymyr Zelenskiy, in his own speech, promised Ukrainians they would defeat the invasion.

“On the Day of Victory over Nazism, we are fighting for a new victory. The road to it is difficult, but we have no doubt that we will win,” said Zelenskiy, in plain army garb with his shirt sleeves rolled-up.

In a clear reference to Putin, Zelenskiy added: “The one who is repeating the horrific crimes of Hitler’s regime today, following Nazi philosophy, copying everything they did – he is doomed.”

Putin’s war has killed thousands of civilians, sent millions fleeing and reduced cities to rubble. Russia has little to show for it beyond a strip of territory in the south and marginal gains in the east.

Sheltering in a metro station in Kharkiv, Ukraine’s mainly Russian-speaking second city, which has been bombed relentlessly since the war’s first days, World War Two survivor Vira Mykhailivna, 90, buried her tear-stained cheeks in her palms.

“I didn’t think this could ever happen to us,” she said. “This day was once a great celebration.”

Kateryna Grigoriyevna, 79, a retired bank manager who has spent 10 weeks underground in the cavernous station, sat eating an ice cream she had ventured out to buy for Victory Day.

“We hate Putin,” she said, glancing around the platform where some 200 people cluster in tents and on thin mattresses.

“I would kill him myself if I could.”

‘ONLY DISHONOUR, AND SURELY DEFEAT’

The Soviet victory in World War Two has acquired almost religious status in Russia under Putin, who has invoked the memory of the “Great Patriotic War” throughout what he calls a “special military operation” in Ukraine. Western countries consider that a false analogy to justify unprovoked aggression.

“There can be no victory day, only dishonour and surely defeat in Ukraine,” said British Defence Secretary Ben Wallace. “He must come to terms with how he’s lost in the long run, and he’s absolutely lost.”

After an assault on Kyiv was defeated in March by strong Ukrainian resistance, Russia poured more troops in for a huge offensive in the east last month. But Russian gains have been slow at best, and Western arms are flooding into Ukraine for an expected counter-attack.

Western military experts – many of whom initially predicted a quick Russian victory – now say Moscow could be running out of fresh troops. A full declaration of war would let Putin activate reservists and send conscripts.

“What rhetoric Putin used in his speech is immaterial. If he didn’t declare war, or a general mobilisation, that’s what (is) important,” tweeted Phillips O’Brien, a professor of strategic studies at Britain’s University of St Andrews.

“Without concrete steps to build a new force, Russia can’t fight a long war, and the clock starts ticking on the failure of their army in Ukraine.”

The war still seems to enjoy strong public support in Russia, where independent journalism is effectively banned and state television says Russia is defending itself from NATO. Conscription would test that support.

“I’m really worried about him. Really. I know many mothers whose sons are now of conscription age … They’re trying to find any way to save their children from going to this war.”

Ukraine’s defence ministry said Russian forces backed by tanks and artillery were conducting “storming operations” at the Azovstal plant in Mariupol, where hundreds of Ukrainian defenders have held out through months of siege. Civilians sheltering there have been evacuated in recent days.

“Today, the Russians focused on blowing up the bridge over which the evacuation takes place, trying to cut off our defenders from the possibility of exit,” Mariupol mayoral aide Petro Andryuschenko said.

On the main eastern front, Ukraine’s military command said in its nightly Facebook briefing that Russian forces were continuing attempts to take control of the Luhansk region town of Rubizhne in order to create favourable conditions for a further assault on the towns of Lyman and Sievierodonetsk.

“The TV and the authorities are lying. No to war,” the messages said.

Exclusive-Germany, Qatar at odds over terms in talks on LNG supply deal -sources