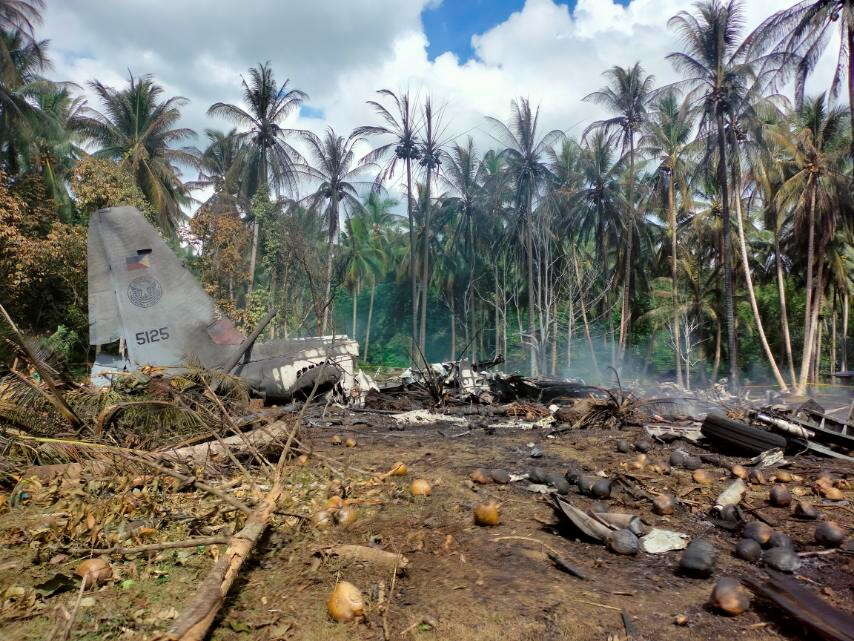 MANILA (Reuters) -Philippine authorities ordered on Monday an investigation into the crash of an Air Force plane that overshot a runway killing 47 soldiers on board, three civilians on the ground and injuring dozens.

Some passengers on the Lockheed C-130 jumped free seconds before the plane crashed and burst into flames on the weekend, officials cited witnesses as saying.

The aircraft, carrying recently graduated troops bound for counter-insurgency operations, had been trying to land at Jolo airport in southern Sulu province.

All 96 passengers on board had been accounted for, with 49 military personnel injured as well as four civilians on the ground, military spokesman Major General Edgard Arevalo said.

In a news conference, Arevalo said the plane was in “very good condition” and had 11,000 flying hours remaining before its next maintenance was due.

“We are determined to find out what really transpired in this very tragic incident, because according to available information the aircraft followed the specified protocols,” he said.

The military command said the soldiers were flying to the provincial airport of Jolo from Laguindingan, about 460 km (290 miles) to the northeast, to be deployed to their battalions.

The army in the sprawling Philippine archipelago has been fighting a long war in the area against Islamist militants from Abu Sayyaf and other factions.

There was no sign the plane was brought down by insurgent fire, officials said.

“We assure our people that we are transparent and the results of the investigation (will be made) available when completed,” added Arevalo, saying that authorities were still searching for the flight recorders.

Jolo airport has a 1,200-metre runway that usually takes civilian turboprop flights though occasionally some military flights, according to a Civil Aviation Authority of the

The Lockheed aircraft had only recently arrived in the Philippines and was one of two provided by the U.S. government through the Defense Security Cooperation Agency, a government website said in January.

It quoted an Air Force spokesman as saying the aircraft would boost capability for heavy airlift missions.

The website C-130.net said the plane that crashed had first flown in 1988. The model is a workhorse for armed forces around the world.

The country’s worst plane crash was that of an Air Philippines Boeing 737 in 2000, which killed 131 people.

January 12, 2022
Editorial & Advertiser disclosureEditorial & Advertiser disclosureOur website provides you with information, news, press releases, Opinion and advertorials on various financial products and services. This is not to be considered as financial advice and should be considered only for information purposes. We cannot guarantee the accuracy or applicability of any information provided with respect to your individual or personal circumstances. Please seek Professional advice from a qualified professional before making any financial decisions. We link to various third party websites, affiliate sales networks, and may link to our advertising partners websites. Though we are tied up with various advertising and affiliate networks, this does not affect our analysis or opinion. When you view or click on certain links available on our articles, our partners may compensate us for displaying the content to you, or make a purchase or fill a form. This will not incur any additional charges to you. To make things simpler for you to identity or distinguish sponsored articles or links, you may consider all articles or links hosted on our site as a partner endorsed link.