Home Headlines Some Russians mourn Queen Elizabeth with flowers as Kremlin pays respects
Our website publishes news, press releases, opinion and advertorials on various financial organizations, products and services which are commissioned from various Companies, Organizations, PR agencies, Bloggers etc. These commissioned articles are commercial in nature. This is not to be considered as financial advice and should be considered only for information purposes. It does not reflect the views or opinion of our website and is not to be considered an endorsement or a recommendation. We cannot guarantee the accuracy or applicability of any information provided with respect to your individual or personal circumstances. Please seek Professional advice from a qualified professional before making any financial decisions. We link to various third-party websites, affiliate sales networks, and to our advertising partners websites. When you view or click on certain links available on our articles, our partners may compensate us for displaying the content to you or make a purchase or fill a form. This will not incur any additional charges to you. To make things simpler for you to identity or distinguish advertised or sponsored articles or links, you may consider all articles or links hosted on our site as a commercial article placement. We will not be responsible for any loss you may suffer as a result of any omission or inaccuracy on the website.
Headlines 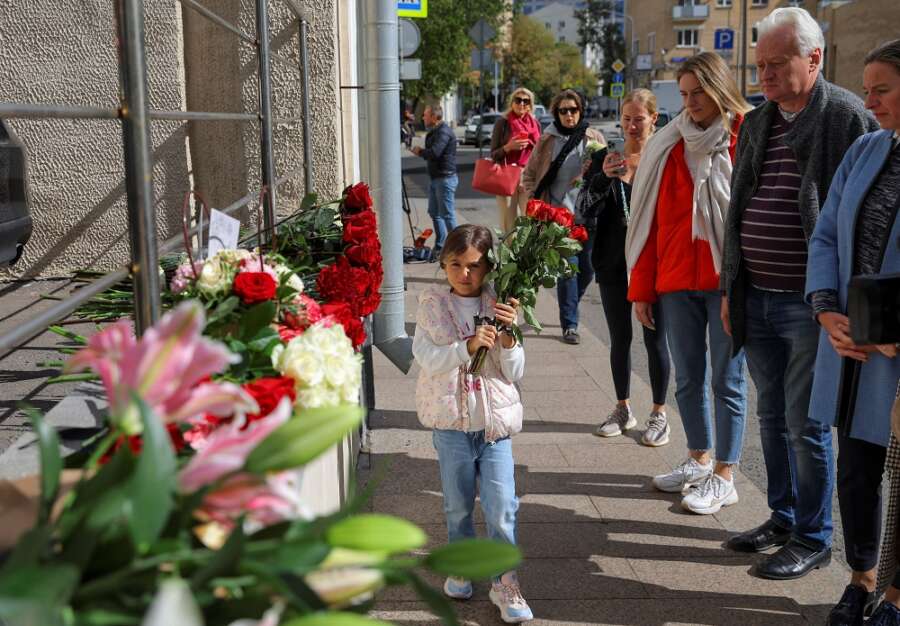 By Mikhail Antonov and Lev Sergeev

MOSCOW (Reuters) – The Kremlin paid respectful tribute to Queen Elizabeth on Friday and dozens of Russians laid flowers at the British embassy, despite the dire state of relations between London and Moscow.

“Despite what is going on now, the Queen and the royal house have always been the personification of peace and goodness,” said Muscovite Anton Avramets after placing a pink bouquet alongside many others on a wall outside the embassy.

His wife Karina said: “She was one of the strongest leaders of Western countries, and now it’s a shame the world has lost her.”

There were lighted candles among the tributes, and one woman made a sign of the cross as she placed red roses on the wall.

Russia’s already poor relations with Britain have worsened sharply since the start of the conflict in Ukraine, and Moscow frequently rails against British leaders, including incoming prime minister Liz Truss this week.

But it made an exception for the queen; President Vladimir Putin called her death an “irreparable loss” in a condolence message on Thursday.

His spokesman Dmitry Peskov praised her “wisdom and authority”, adding: “Such qualities are in very short supply on the international stage at the moment.”

Patriarch Kirill, head of the Russian Orthodox Church, called her a symbol of historic traditions for the whole of Europe and “an example of the highest culture”.

The queen was a distant cousin of Russia’s last tsar, Nicholas II, who was murdered with his family by the Bolsheviks in 1918 and is now revered by the Orthodox Church as a saint.

She visited Russia in 1994, the only reigning British monarch to do so, and hosted Putin for a state visit in 2003 at a time when he was still seen as a potential partner by the West.

“It is sad. A new epoch in international politics is arriving,” said Artyom, a Moscow resident interviewed near the Bolshoi Theatre near the Kremlin.

On the numerous television talk shows that have become ever more belligerent since Russia deployed its armed forces to Ukraine on Feb. 24, there was little coverage of the death.

A mid-afternoon news bulletin focused mainly on the start of local elections, and on Putin’s address marking the reopening of a war memorial in the self-declared Donetsk People’s Republic, a Russian-backed breakaway territory in eastern Ukraine.

On Channel One’s flagship talk show “Time Will Tell”, a host said the queen’s death was unlikely to influence the disposition of Western countries, including Britain. “That will be decided here, in the Donbas (eastern Ukraine).”

Some Muscovites shared the sentiment.

Outside the Bolshoi, Tatiana, who declined to give her last name, said: “‘Well done’ to her that she lived so long. But all the same, I didn’t hear much (about her). That’s why it means nothing to me.”